A park goer in Arkansas struck gold — or diamond — when he discovered a 2.38-carat brown diamond in Arkansas's Crater of Diamonds State Park, the largest found this year.

The lucky finder, identified as Adam Hardin, discovered the gem on April 10 while wet-sifting soil, according to the park. Hardin, who is a regular visitor to the park, has spent more than a decade searching for diamonds. This is his first find weighing more than two carats.

"It was right in the middle when I flipped my screen over," Hardin said in a statement, according to the park. "When I saw it, I said, 'Wow, that's a big diamond!'"

The diamond is about the size of a pinto bean, the park noted, with a "coffee brown color and a rounded shape." It has a metallic shine as well as a few inclusions and crevices. Hardin named the diamond "Frankenstone."

The process of wet-sifting is when visitors use a screen set to wash away soil and separate gravel by size, according to the park. The smaller gravel is then sorted by weight.

"When it's flipped upside-down, the heavier gravel — and sometimes a diamond — can be found on top of the pile," Park Interpreter Waymon Cox said in the statement.

So far this year, visitors have discovered and registered 260 diamonds at the Arkansas park, weighing a total of more than 44 carats. Typically, visitors find an average of one to two diamonds each day. The most common colors found are white, brown, and yellow.

This latest find is the largest since a California visitor discovered a 4.38-carat yellow diamond last year. But even that was not the largest ever found: that honor belongs to a 40.23-carat white diamond with a pink cast that was discovered in 1924, decades before the Arkansas park itself was established in 1972.

Slightly smaller stones have been found in more recent years, like in 2020 when a man discovered a 9.07-carat brandy brown diamond, the second-largest ever found at the state park; and in 2019 when a Nebraska teacher found a 2.12-carat brown diamond. 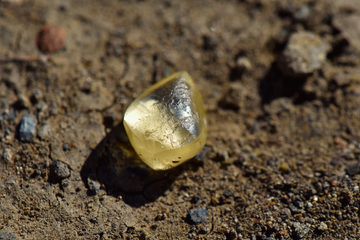 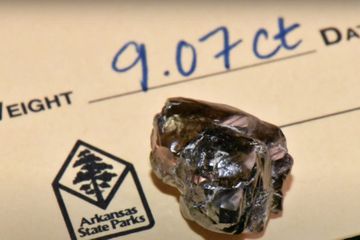