Delta Air Lines will cut about 100 daily flights from its summer schedule in an effort to minimize disruptions, according to the airline, becoming the latest carrier to make summer adjustments.

The cuts, which will mostly take place in markets that "Delta frequently serves" throughout the United States and Latin America, will be in effect from July 1 through Aug. 7, according to Delta.

"More than any time in our history, the various factors currently impacting our operation — weather and air traffic control, vendor staffing, increased COVID case rates contributing to higher-than-planned unscheduled absences in some work groups — are resulting in an operation that isn't consistently up to the standards Delta has set for the industry in recent years," Chief Customer Experience Officer Allison Ausband said in a statement, adding the airline would "adapt and pivot to ensure we provide the airline-of-choice experience we're so proud to be known for."

High demand, coupled with rising gas prices and staffing shortages, have led to historic increases in airfare prices. In fact, the Bureau of Labor Statistics noted airfare prices increased more than 18% in just the month of April alone, the sharpest single month increase since 1963.

This weekend, more than 39 million people are expected to travel for the Memorial Day holiday weekend, 8.3% more than in 2021, according to AAA. And air travel specifically will see a 25% increase over the holiday weekend compared to the same time period last year.

Several airlines have also dealt with mass cancellations in recent weeks, struggling to bounce back after disruptions pile up.

Delta is not alone in adjusting schedules. Last month, both JetBlue and Alaska Airlines decided to trim their summer flight schedules amid issues with staffing shortages.

"With these network changes, we believe we are positioning American to succeed in 2022 and beyond, while also running a safe and reliable airline for our customers, our communities and our team," the airline wrote in an internal memo shared with T+L. 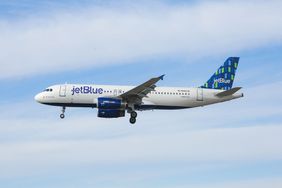