Famous Daffodil Hill in California Is Closing Indefinitely Due to Overtourism

Droves of flower-obsessed Instagrammers forced this beautiful field to close.

Instagram is a great way to creatively document your travels, but it can also cause some real problems for the beautiful locations you see on your feed.

McLaughlin's Daffodil Hill, in Volcano, California, near Sacramento, is the latest in idyllic, Instagram-worthy locations to close due to unsustainable conditions created by droves of flower-loving social media influencers, according to CNN.

The picture-perfect area is famous for its fields of white and yellow daffodils that are so lush, they rival that daffodil scene in Big Fish. But perhaps all beautiful things cannot last, especially when people are flocking there to “do it for the ‘gram.”

CNN reports the family that owns and runs the field announced on Facebook on Monday that the field was to be closed indefinitely in order to protect the area.

“The generations that came before us who purchased this property in 1887, which evolved into Daffodil Hill, could never have envisioned that their efforts would have ever grown into such a beloved attraction,” it said in the announcement. “It is this overwhelming popularity that has led us to our decision to close.”

The land owners say the area does not have sufficient parking or road infrastructure in order to keep up with the droves of visitors, especially after this last year.

“Many visitors chose to park their vehicles along the narrow roadways and walk through traffic to the Hill,” it said in the announcement. “These vehicles were parked illegally on the roadway, which ... would have impeded any emergency vehicles that needed to access the Hill area.”

Social media and pop culture influences have caused trouble for the environment and locals near tourist hot spots before. Earlier in 2019, Officials in Lake Elsinore, California also had to shut down a popular Instagram spot known after a “super bloom” of poppies lured thousands of people to the area.

In addition, Thailand’s Maya Bay had to close indefinitely to tourists in October 2018 after significant damage to the coral reef. The bay was a particularly popular spot due to the 2000 Leonardo DiCaprio film, The Beach. Since then, scientists in the area have been working on projects to help restore the reef.

Perhaps one day, Daffodil Hill will open again once social media frenzy dies down or new policies are put in place to protect the environment. Until then, influencers will have to go elsewhere. 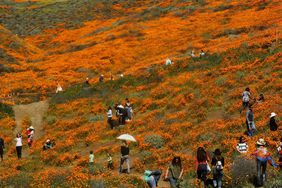