An Ancient Mayan Cave Was Just Uncovered in Mexico — and It’s Been Undisturbed for 1,000 Years

Call it every archaeologist’s wildest dream. During a recent search for a water table under the Mayan ruins of Chichen Itza in Mexico, archaeologists uncovered a cave filled with artifacts that have laid undisturbed for at least 1,000 years.

The more than 150 ancient relics were found in a group of underground cave chambers called Balamkú, located a little over a mile from the famed El Castillo, or Temple of Kukulcan. The objects ranged from incense burners to plates and bowls — it’s thought these artifacts, estimated to date back to sometime between 700 and 1000 A.D., will help scientists understand more about the origins and beliefs of Mayans residing at Chichen Itza.

Mexico’s National Institute of Anthropology and History (INAH) announced the fortuitous discovery at a press conference this week, calling it “one of the most important findings in the history of the investigation of this ancient Mayan city.”

Stumbling upon the cave chamber was no easy feat. According to National Geographic, INAH explorer Guillermo de Anda pulled himself through extremely narrow tunnels on his stomach for hours before he caught a glimpse of the relics.

“I couldn’t speak, I started to cry. I’ve analyzed human remains in [Chichén Itzá’s] Sacred Cenote, but nothing compares to the sensation I had entering, alone, for the first time in that cave,” de Anda told National Geographic.

De Anda and his team were originally looking for a sacred well by inching their way through the series of caves.

“The difficult access and morphology of the cave exacerbates the sacred qualities of the cave, which suggests that it is a purely ritual context,” said archaeologist Pedro Francisco Sánchez Nava, national coordinator of archeology at INAH, during the press conference.

While the artifacts in Balamkú have remained untouched for centuries, they have been seen by one other pair of eyes in the last 100 years. Farmers first discovered Balamkú​​​​​​​ in 1966, and soon after, an archaeologist named Víctor Segovia Pinto decided to explore the caves. National Geographic notes that Pinto reported on the archaeological richness of the site, but chose not to excavate it. Rather, for unknown reasons, he requested the farmers seal the entrance. It stayed sealed until last year, when de Anda opened it to begin hunting for the water table.

"Balamkú will help rewrite the story of Chichen Itzá, in Yucatán,” de Anda said. "The hundreds of archaeological artifacts, belonging to seven offerings documented so far, are in an extraordinary state of preservation. Because the context remained sealed for centuries, it contains invaluable information related to the formation and fall of the ancient City of Water Wizards, and about who were the founders of this iconic site.” 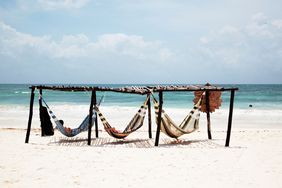