This Bear Became an Unexpected Highlight at an Olympic Softball Game

The creature was seen at a Fukushima Azuma Baseball Stadium, about 150 miles north of the central Olympic sites in Tokyo.

There was an unexpected competitor going for the Olympic gold in Japan last week.

Hours before the first event of the Tokyo 2020 Olympics at Fukushima Azuma Baseball Stadium last Wednesday, a bear was spotted by guards, the Associated Press reported.

The furry creature was seen both the night before and the morning of the Japan-versus-Australia softball match. "We couldn't find or capture the bear, and while there won't be any spectators at the stadium, we are on alert and searching for the bear around the site," a police spokesperson for Fukushima told Agence France-Presse. While some local outlets identified it as an Asian black bear, others reported that it was a brown bear.

The venue where several baseball and softball matches are being played is located quite a distance from the bulk of the events in Tokyo. As part of the Azuma Sports Park in Fukushima City, it's about 150 miles north of the capital, according to the AP.

The sighting brought unexpected firecrackers and loud music to the area — tactics that the newspaper Sports Hochi reported were part of a strategy used to keep the creature away, as a group of guards spent the entire night on the search.

The cause for concern was warranted. According to Agence France-Press, though the animals are common in the area, they're particularly dangerous when they reach the towns since they have a tendency to attack — and even kill — humans. In fact, just last year, Japan faced the most bear attacks in five years, Bloomberg reported, attributing the fact to the global pandemic keeping people inside.

"I woke up to text messages asking, is this real? There's a big black bear, saying that it got on the field, it got in the area and it's on the loose," American shortstop Amanda Chidester told the AP on Thursday. "And I felt, what? This is crazy. No way." There were no further sightings on Wednesday or Thursday.

Last month, The Japan Times reported that a brown bear was shot and killed after it injured four people in Sapporo, which will host the Olympic marathon running and race walking events in August. 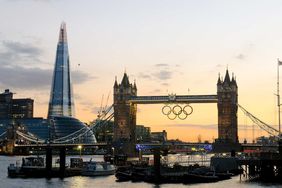