In the last creation from late artist Christo, the Arc de Triomphe has been covered in reams of fabric for all to see.

Visitors to Paris will notice that one of the city's most famous monuments is, quite literally, under wraps for the next few weeks.

In the last creation from late artist Christo, the Arc de Triomphe has been covered in reams of silvery-blue fabric in an installation appropriately titled, "Wrapped." The project was supposed to go ahead in fall of 2020, but was delayed due to the pandemic.

Announced earlier this summer, the artwork entails involves 270,000 square feet of fabric and 23,000 feet of red rope and took nearly 12 weeks to complete.

"Wrapped" was originally conceived by Christo and his wife and artistic partner Jeanne-Claude before her death in 2009. They began planning to wrap the Arc de Triomphe in fabric back in the '60s, when they lived close to the Champs-Élysées.

"Until his last breath, Christo worked tirelessly on this project, his last 'temporary exhibition' as he liked to call it," Simon Shaw, vice chairman of the global fine arts division at Sotheby's, told designboom. "And these original works indeed open a window onto the magical imagination of the late artist, the joy and wonder he found in preparing his most ambitious installation."

The work was funded by Christo's nephew, Vladimir Yavatchev, at about $16.5 million (€14 million).

The official viewing period of the artwork is Sept. 18 through Oct. 3, but visitors to the Champs-Elysees can already see the wrapped landmark. Sotheby's Paris will also host an exhibit during that time, offering behind-the-scenes looks at Christo's 60-year process to wrap the Arc de Triomphe.

For those who can't make it to Paris to see "Wrapped" in person, a live view of the art installation has been streaming on YouTube.

Christo was known for his larger-than-life installations around the world, many of which included wrapping. His fabric works have appeared in New York City's Central Park, on the rugged Australian coast, and Berlin's Reichstag parliament building.

And the Arc de Triomphe is not Christo's first big work in Paris. In 1985, he wrapped the city's Pont Neuf in yellow fabric. 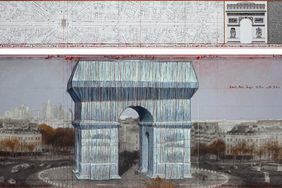 Paris's Arc de Triomphe Is Getting a Temporary Makeover This Fall