The Boeing 737-900 ER is painted with images of 14 students, along with quotes from Maya Angelou, Martin Luther King, Jr., and Nelson Mandela.

Alaska Airlines is hoping to fly toward a brighter future. Last week, the carrier debuted its newest aircraft, showcasing quotes from Maya Angelou, Martin Luther King, Jr., and Nelson Mandela, along with images of 14 students, as a sign of its commitment to a more equitable future through education. The Boeing 737-900 ER, which was designed in partnership with the nation's largest minority educational organization, UNCF, is called "Our Commitment."

"As a company, we know we are not yet where we need to be when it comes to diversity, but we are inspired and guided by our value to do the right thing," the airline's CEO Ben Minicucci said in a statement. "With this aircraft, we are doing the right thing by amplifying the conversation around education, equity, and belonging and taking it to the skies."

The project was born from conversations with the company's Air Group Black Employees, Allies and Advocates (ABEA) about the civil unrest from the summer of 2020, which resulted in the belief that education is key to making real change in equity and representation.

In order to capture that messaging, designer Jonny Mack — who had previously created 11 of Alaska's special aircrafts — turned to Chicago artist Adé Hogue, who he had met at a typography conference.

"I knew that we needed a Black voice and perspective in the design, and Adé's recent work tackling big social justice issues seemed like the perfect collaboration," Mack told Travel + Leisure. Initially using random images of people on the plane, they felt like there was an opportunity to do something more. "I suggested that we reach out to Alaska's employees and use real children and students to bring in a personal connection and really tell that story of education with the UNCF partnership," he added.

Thus, the 138-foot-long, 41-foot-high artwork now ties together the company's messaging in the most personal of ways, showing both family members and mentees of its employees, all of whom have their own stories to tell. Additionally, the seatback cards detail the airline's message, along with the history of its 15-year partnership with UNCF.

Among those featured is Mack's own biracial son, Micah Mackaly, a 22-year-old graduate of the U.S. Air Force Academy. Micah is now a second lieutenant on his path to becoming a pilot. "Growing up, having two white parents, I usually had to explain myself to new people and could see the shock on their faces," he explained to Alaska Airlines. "What a lot of biracial kids experience is like, you're not Black enough for the Black kids and not white enough for the white kids and you are always kind of looked at a little bit different. I'm thankful I'm able to embrace those differences now and look at them as a positive."

"Micah's education journey is really unique, and with him being a recent graduate of USAFA and currently in the Air Force's pilot training program, his story fit nicely with the breadth and scope of the other children's stories," his father told T+L, adding that he and Micah were especially thrilled to meet a fellow student featured on the plane — London, a student at Colorado Springs' Air Force Academy Preparatory School. (London, who has her private pilot's license, is mentored by Alaska Airlines' first Black female pilot, Kim Ford.)

For the father and son, the day of the reveal was especially momentous. "I had the unique experience of being with Micah alone in the hangar when he saw it for the first time," Mack told T+L. "We stood back and looked up at the aircraft...It was amazing to see my son's face, along with 13 other Black and brown faces, on the side of an aircraft that will be flying for the next 10 years."

Micah was just as impressed with his dad's work. "I was speechless when I saw my face on the plane," he told T+L. "The whole design turned out so great. I don't think I've ever seen such a well-designed plane paint [job]." And he's hopeful about the message behind it, adding, "Fighting for equity in education is fighting for an expansion of that opportunity for all children who dream big." 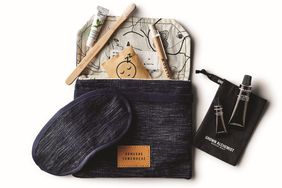