Amateur astronomers and space enthusiasts can watch it whiz by on the Virtual Telescope Project's website starting at 3 p.m. EST when it's at its peak brightness.

The scientists at Italy's Virtual Telescope Project are inviting you to take a little mid-day break today to watch some interstellar magic as an asteroid is going to be in full view.

On Tuesday, the Virtual Telescope Project, located in Rome, will host a live stream of asteroid 7482 as it makes its closest approach to Earth. Don't worry, it's still a solid one million miles away from the surface of our home planet, but this is closer than the asteroid will get for at least the next 200 years, EarthSky reported.

The space-centric publication noted, asterid 7482 is "classified as a Potentially Hazardous Asteroid" due to its size (it has an estimated diameter of around 750 – 1350 meters) and relatively close approaches. However, EarthSky added the reassuring disclaimer that "an asteroid of this size strikes Earth approximately every 600,000 years," so we're good…this time.

Amateur astronomers and space enthusiasts can watch it whiz by on the Virtual Telescope Project's website starting at 3 p.m. EST when it's at its peak brightness. Or, just click "play" on the live stream below.

For those looking for more of a hands-on viewing experience, EarthSky says skywatchers may be able to catch a glimpse of it using just a small telescope pointing in the right direction. It's published a few easy-to-follow sky maps, as well as nearby markers to make viewing as simple as possible.

Still feeling anxious about asteroids? Space.com notes there are people working diligently day in and day out to protect us from potentially dangerous asteroid strikes in the future. It notes, NASA is currently conducting research with projects like the Double Asteroid Redirection Test (DART), which will seek to alter the path of an asteroid's moonlet this fall.

And if that doesn't work out, we could always call in Bruce Willis.

The 12 Best Binoculars for Every Type of Traveler in 2022 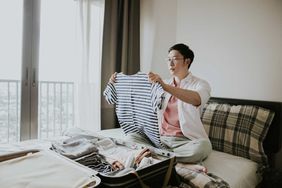 The One Suitcase Hack That Will Keep Your Clothes Wrinkle-free, According to a Professional Packer