The roughly 2,190-mile trek wasn't quite enough for M.J. Eberhart, so he added on a few hundred miles by starting in Alabama.

Even the Appalachian Trail Conservancy's own site warns that completing its 2,190-plus miles from Georgia to Maine in a one trip is a "mammoth undertaking," revealing that only a quarter of the thousands who attempt the thru-hike each year actually finish it. But M.J. Eberhart has always been one to beat the odds — and on Sunday, he took the final stretch of his journey into Dalton, Massachusetts, making him the oldest, at 83, to complete the trek, The New York Times reported.

Better known by his trail name, Nimblewill Nomad, the retired eye doctor had some company for the final few miles with the former record holder, Dale Sanders, known on the trail as Grey Beard. Now 86, Sanders had held the record since 2017, when he completed the trek at age 82. Driving up from Tennessee, Sanders offered Eberhart an engraved hiking stick at the end of his journey, symbolically handing over the record.

"An incredibly emotional time, as I again break down in tears," Eberhart wrote on his blog of the moment that was accompanied by a victory dance and Champagne.

For the first 30 days, he was on the Pinhoti Trail. He then headed onto the Benton MacKaye Trail for eight days before hitting the true start of the Appalachian Trail on March 30, the 39th day of trekking.

He kept a journal, documenting the day's mileage and experience — including the people he met along the way — always ending with an inspirational quote, ranging from Henry David Thoreau to Dr. Seuss. He carried about nine pounds of gear, which included a solo tent, sleeping pad, and iPhone. Along the way, he faced physical pain, especially in his foot, as well as bears and a swarm of mosquitos.

For Eberhart, starting in Alabama instead of Georgia added a few hundred miles to his journey, which had a bit of a detour when he was met with troublesome weather in July around the New York-Connecticut border. But that didn't get him down — he simply hitched a ride with a friend up to Maine and hiked downward, thus completing the trip in Dalton.

And this wasn't the first time Eberhart finished the trail, having accomplished the feat in 1998, as part of his Ten Million Step Eastern Continental Trail trek.

As for what his next journey might be, the quote he chose for his journal entry last Friday might offer a clue. He went with the words often attributed to C.S. Lewis: "You are never too old to set another goal or to dream a new dream." 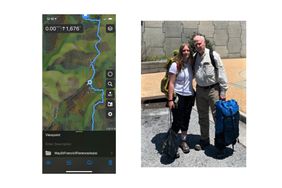