Take a breath of fresh air in the famed Italian mountains.

Located in the northeast corner of Italy, bordering Austria, travelers will find the Dolomites. Le Dolomiti (in Italian) share some of the alpine styles of neighboring regions, but boast a culture — and even a language — all of their own.

Ladin is a language spoken in South Tyrol, Trentino, and Belluno, though you're just as likely to hear German and Italian throughout the region. That's because South Tyrol was part of the Austro-Hungarian Empire until 1918, when it was annexed to Italy.

The Dolomites also offer some of the most incredible mountain scenery in Europe, with 18 peaks rising more than 10,000 feet. Dolomitic limestone forms the mountains' peaks, which rise dramatically above green valleys and picturesque lakes that freeze in the winter. The region is a favorite ski destination among Italians and famous for hiking in the summer. Here's everything you need to know about visiting the Dolomites.

Best Time to Go to the Dolomites

The Dolomites are a famed ski destination, with many Italians and visitors heading there during the winter holidays. They have also become increasingly popular in the summer, especially for hiking and nature lovers. During the shoulder seasons — from late March through late May and from early October through mid-December — many resorts and hotels shut down.

A cable car will take you up to the summit of this mountain, which is a popular spot for skiing in the winter and hiking come summer. At the first stop on the cable car, you'll find the Masi Wine Bar and Ristorante Col Druscié 1778, which serves apple strudel and spiked eggnog alongside salads and heartier fare.

Arriving at the beautiful Lago di Misurina, about 20 minutes by car from Cortina d'Ampezzo, you'll see the yellow rehabilitation center for children, created because the fresh mountain air was believed to cure respiratory ailments. The lake, situated 5,761 feet above sea level, draws people in all seasons to walk the 1.6-mile perimeter, along which there are places to picnic. It's also the access point for hiking the Tre Cime di Lavaredo, a popular trail that departs from the Rifugio Auronzo.

This Instagram-famous lake is especially alluring in the summer, when the sun reflects off its emerald waters, around which rises the impressive Seekofel massif. From June to September, you can rent a wooden rowboat (€25 for an hour, €15 every 30 minutes after that) and cruise around the lake, but because it has become so popular, the boathouse often runs out of boats by 11 a.m. If you don't want to wait, it's best to arrive when the boathouse opens at 9:30 a.m. You can also walk around the lake's perimeter, stopping to admire the chapel built in 1904. For a more strenuous hike, you can access the trails that lead up into the mountains from the south end of the lake.

Best Things to Do in the Dolomites

Dolomiti Superski is a network of 16 ski resorts with 745 miles (1,200 kilometers) of slopes and 450 lifts that you can access with just one pass. It includes popular destinations like Cortina d'Ampezzo, Alta Badia, Val Gardena, and Marmolada. There are single-day tickets, multiday options, or season passes available online. Of course, you can also buy tickets at the individual lifts.

If you don't know how to ski (or just want a break from the slopes), sledding is an exhilarating outdoor activity. At Lago di Misurina, you can ascend the Tre Cime di Lavaredo aboard a snowmobile and sled back down. The driver will drop you off at the Rifugio Auronzo 7,654 feet above sea level, where you can borrow a sled to whiz down.

The grand dame of Cortina d'Ampezzo, the ritziest ski town in the Dolomites, Cristallo boasts a long and illustrious history. Opened in 1901, it hosted an impressive roster during its dolce vita heyday, including Frank Sinatra, Brigitte Bardot, aristocrats like the Duca d'Aosta, and even the U.S. Olympic team, which practiced at the hotel's ice-skating rink in 1956. Now a member of Marriott's Luxury Collection, the property combines alpine charm with the amenities of a luxury hotel, including a relaxing spa and a fabulous bar that serves creative cocktails.

A member of the Leading Hotels of the World, this family-run mountain chalet was opened in 1957 by Annie and Ernesto Costa, who still live on the third floor. Their sons now run the property and have added distinctive touches, like a trippy tour of the wine cellar, a Michelin-starred restaurant, and an après-ski club. The resort is so close to Austria that you're just as likely to hear German as Italian. Ask for a peek of Ernesto's impressive collection of vintage motorcycles.

Run by a young couple, this Michelin-starred restaurant highlights fresh local ingredients, including cheeses and charcuterie made at the owners' agriturismo up the road. The tasting menu is a gastronomic journey into the mountains, with dishes like marinated trout with smoked broth and barley prepared like a risotto with aged cheese, pepper, and bay leaves.

If you don't want to splurge on a full meal at SanBrite, you can get a little taste of the owners' sustainable cuisine at their charming wood-paneled agriturismo. The fonduta served with crunchy cubes of toasted bread is not to be missed.

This B&B and its restaurant may look traditional, with its wood-paneled walls and old-fashioned chairs, but dishes are presented in a fresh, modern way. Try the spaghettini with braised onion sauce, or go for casunziei, a local specialty of ravioli stuffed with beets and herbs and sprinkled with poppy seeds. 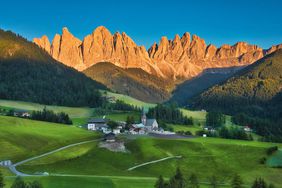 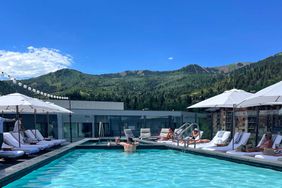