Royal Caribbean International just announced its new 'Icon' class of ship — with some of the most over-the-top features in cruising history.

When it arrives next year, the new Icon of the Seas ship will be one of the most over-the-top in history, not to mention one of the biggest in the world.

Which stands to reason: The amenity-packed Royal Caribbean International ship, slated to arrive in late 2023, is designed to be the end all, be all of family fun, the brand announced Thursday morning.

“We set out to create, frankly, the best family vacation in the world,” said Royal Caribbean International chief product innovation officer Jay Schneider, in an interview with Travel + Leisure. “More than anything we've ever done before, this really is designed to compete with any vacation on the planet.”

Years in the making, Icon of the Seas will be the first in a series of ships known as the Icon Class. Each promises to have a head-spinning array of features; on Icon, that’ll include an enormous waterpark, seven swimming pools, a private suites-only retreat, an improved “Central Park” filled with live plants, a cocktail bar dedicated to frozen drinks, a swim-up cocktail venue (a first for the line), dozens of restaurants, a rock-climbing wall, and even a 55-foot indoor waterfall.

"It’s been more than five years since we started to design Icon with the dream to create the best family vacation in the world," said Michael Bayley, president and CEO of Royal Caribbean International, in an email to T+L. "Everything you could want from a getaway is all in one place, and after the past few years, an experience like this is more than what adventurers are looking for — it’s what they could’ve hardly imagined."

The Icon will accommodate thousands of guests, with 2,805 staterooms across 28 different room categories, including what Royal Caribbean International, or RCI, calls “the three-story Ultimate Family Townhouse, complete with its own white-picket fence and mailbox.”

Not that this mega-ship is all about the numbers, Schneider said.

“I would say the best thing about the ship is the connection we made to the water, the views we've created through the heart of the ship,” he explained.

The new Icon heralds a brand-new class of ship for RCI, which consistently ranks among the World’s Best mega-ship lines, according to T+L readers.

Despite the evolution in design, Icon will, like other RCI ships, be arranged around “neighborhoods” such as AquaDome, Chill Island, Surfside, and The Hideaway, each of which promise a different experience and vibe for guests. One particularly noteworthy area will be Thrill Island, Schneider told T+L.

“It has the world's largest water park at sea — you could argue the only water park at sea — with six mind-blowing water slides,” Schneider said. “And on the other side, you've got Crown’s Edge, where, for the first time ever, you’ll be able to do a mini little course, walk around the world's largest crown and anchor,” RCI’s famed insignia, “which is perched on the side of the ship. You’ll be tethered, then fly around the crown and anchor, while 154 feet above the ocean, before you safely return back to the ship.”

Notably, this mega-ship will be the first vessel in the brand’s fleet powered by liquid natural gas, a comparatively cleaner-burning alternative to what’s typically used in the cruise industry. The ship will also have a fuel cell that allows for some operations to run off battery power, reducing in-port emissions in certain destinations. Smart heating and cooling systems aboard the Icon, which switch on and off when guests board and disembark, will also help with energy efficiency, Schneider said.

When it starts sailing, Icon of the Seas will offer seven-night round trips from Miami that include a stop at Royal Caribbean’s private-island retreat, Perfect Day at CocoCay. Rates haven’t yet been announced. 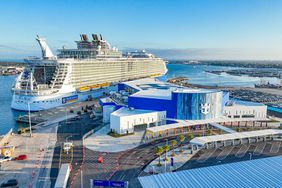 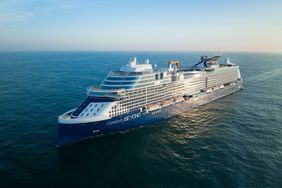 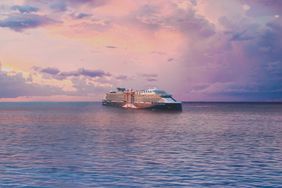 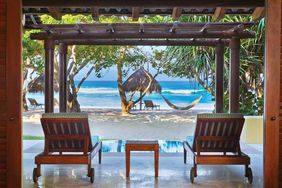 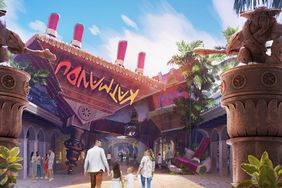