The 12 Best Places to See the Sunset Around the World

Melissa Locker is a freelance writer, editor, and producer specializing in music, travel, television, food, arts, and entertainment. Her work has appeared in Time magazine, Fast Company, Travel + Leisure, The Sydney Morning Herald, The Guardian, Vanity Fair, and Rolling Stone, among others. Melissa started her career in New York in 2008 as a radio producer at WNYC and a writer at Bravo TV. She then began contributing to publications like Rolling Stone, Fortune, Grantland, and Stereogum, where she specialized in interviewing musicians. She later served as a weekend editor at Vanity Fair. Melissa has recently returned to her audio production roots as the founder of Nevermind Media, a company that creates high-end music podcasts.

The best thing about sunsets is that you're never going to see two that are completely alike. Celebrate those differences by taking in as many sunsets as possible in different places around the world. Watch Mother Nature put on her nightly display from an island in the South Pacific as the sun drops into the ocean, watch daylight turn to dusk from the red rocks of the desert, take in the cotton candy skies from Santorini, or stand on a rocky outcropping as the sun illuminates a centuries-old temple. Wherever you travel in the world—and no matter what your daily itinerary or budget may be—take advantage of the free show that plays out every night. In case you're looking for some inspiration for your next sunset-spotting adventure, here are 12 of the best places to watch the sunset around the world.

Head to the far northwest corner of the Olympic Peninsula to visit one of Washington State’s most beautiful beaches. Bring your camping gear—getting to Shi Shi requires a trek through the fir-filled forest to the cliff edge that drops into the Pacific Ocean. Hike down the rocky trail to the unspoiled beach lined by tide pools and driftwood stands. Set up camp on the beach to watch the sunset behind the stunning sea stacks and rocky arches for a dramatic Pacific sunset.

Whether you’re standing with your feet in the sand at Barra da Tijuca or sipping a caipirinha on Leblon’s golden shores, there are many ways to enjoy a Rio de Janeiro sunset. Locals looking for a romantic rendezvous, though, usually head to Arpoador—a small peninsula that sits between Ipanema and Copacabana and juts out into the ocean. Arpoador’s geography allows for stunning views in all directions making it the perfect spot to watch the sun dip into the ocean.

For the quintessential California sunset experience, head straight to Malibu. Point Dume State Beach offers unparalleled views of the Pacific, Malibu’s famed bluffs, and, if you’re lucky, dolphins playing in the warm waters. Stick around to watch the sky turn from blue to pink to read, or head to the nearby El Matador State Beach to kick back on Zuma Beach, explore the sea caves, and watch the sun set behind the beach’s unique rock formations that make the dazzling sunset views even more dramatic.

If you’re looking to snap a few dramatic sunset photos, head to Bagan, Myanmar’s Valley of Temples. Each night as the sun drops low in the sky, it lights up the outlines of more than 2000 ancient temples, pagodas, and monasteries that have sat in the Valley for a thousand years. There are locations throughout Bagan to capture stunning sunset vistas and snap photos of the sacred Buddhist and Hindu temples at dusk, but for a birds-eye view book a hot air balloon ride over the Valley.

As the westernmost state, Hawaii is perfectly placed for gorgeous sunsets. Head to Kailua Kona Bay on the Big Island to watch the sun drop into the ocean against a backdrop of dark, volcanic rocks. Alternatively, spend the day splashing in the turquoise waters and resting on the white sands of Hapuna Beach State Recreation Area. Stake out a good spot and stick around for a sunset picnic as the sun’s rays turn the sky and water into an orange and pink light show.

There’s nothing like a salt flat to add drama to a sunset. Bolivia’s 4,000-square-mile stretch of “beautiful moonscape” mirrors the endless blue sky. When the sun starts to slowly descend into the distant horizon, the encrusted salt fields reflect the sun’s rays transforming the landscape into an otherworldly plane. Be warned: when the sun goes down, the temperature drops dramatically.

Enjoying the sunset is a nightly celebration in Key West. Locals and tourists descend on Mallory Square Dock to toast the sun as it dips into the Gulf of Mexico. What started out as a casual ritual has turned into a party with food carts selling everything from Key Lime treats to conch fritters while musical acts fill the air with their tunes and artisans do a bustling trade in local arts and crafts. The backdrop takes center stage when the sun paints the sky in a dazzling array of pink and orange.

There’s no bad place to view the sunset in Bora Bora, but you’ll make the memory of a lifetime if you can watch the sun dip low into the crystal clear water from a hammock on the private deck of your over-water bungalow. The Four Seasons Bora Bora is one of the best beach hotels in the world, and a top-choice for honeymooners or anyone looking for a romantic getaway. Take in the sunset over Mount Otemanu while you’re sipping tropical drinks in your private plunge pool watching black-tip reef sharks, unicorn fish, and peacock damselfish swim by.

Uluru, or as some call it Ayers Rock, undergoes a dramatic transformation each night when the sun sets over the Australian outback. The rock cuts a striking silhouette across the sky as the sun paints it orange, deep red, burnt umber, and ochre, before it turns black under the cover of night. Hike to the top of the dunes for a stunning view of Uluru and the nearby ancient rock formations known as Kata Tjuta.

Watching the sun set can be a near-spiritual experience in the raw beauty of Sedona, where the desert meets the mountains. Sedona is known for its famous red rock buttes, and the sun’s setting rays make the vibrant colors of the landscape glow against the deepening blue of the desert sky. To maximize the experience, spend the day hiking up to Red Rock Crossing near the Crescent Moon Ranch and stick around for sunset along the creek. For an easier adventure, drive to Airport mesa to watch the sun disappear behind Bell Rock, Cathedral Rock, and Courthouse Butte.

If you’ve always dreamed of capturing a photo of the unmistakable silhouette of a giraffes illuminated by the sun, head to Tanzania. This African nation has worked to protect its wildlife populations and is now home to rhinos, cheetahs, lions, elephants, zebras, and those photogenic giraffes that roam the Serengeti Plain. Take a safari at sunset to watch as waves of heat and the slow descent of the sun turn the landscape gold. If you’re lucky, a giraffe will pause by a baobab tree at just the right moment.

The lovely islands that make up the Azores archipelago sit off the coast of Portugal in a nearly empty stretch of the Atlantic Ocean that allows for unimpeded views of the water, sky, and brilliant sunsets. Spread across 374 miles, this autonomous region of Portugal offers endless opportunities for soaking up the last rays of the sun. Stand on the rocky coast of São Miguel—the Azores' largest island—to catch the final hours of daylight, or drive out to Sete Cidades to watch the sun drop into the azure blue crater lakes. Alternatively, visit Angra do Heroísmo, a UNESCO World Heritage Site, on the island Terceira and toast the sunfall while sipping champagne on the shoreline. 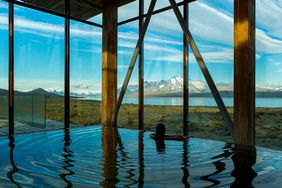