On a newly refitted expedition ship, a hesitant adventurer discovers the upside of getting out of his comfort zone.

You need to be a brave and hardy sort to spend much time in Hesteyri, a deserted town on the northern coast of Iceland, which is why I was keen to split. Our traveling party — a mix of expedition newcomers, like me, and done-it-all adventurous types — landed in the abandoned settlement to poke around the ruins of a whaling station. The impromptu stop was one of many in the country’s desolate Westfjords, but, truth be told, it was the spookiest.

As darkening clouds seeped in from the bay, I suggested that we reacquaint ourselves with the comforts of our ship, the Nansen Explorer. My trepidation was amplified by the fact that, when we spotted a lone park ranger, she told us that she’d spent the past week patrolling the 220 square miles of nature reserve surrounding Hesteyri all alone. Admiring her fortitude, we handed her the best gift we could muster — a bag of freshly baked pastries carried from the ship — before she disappeared into the undergrowth. The encounter was just one of many surreal moments I had aboard the Explorer in the summer of 2021. Iceland is about the size of Kentucky, yet is home to only 375,000 people; much of the country remains difficult to access, particularly around the jagged perimeter.

It’s just the type of place our expedition ship was made for. Built in the 1980s, the Explorer was once a floating casino that sailed between Russia and Japan; life on board was presumably more restrained when it later served as a Norwegian government patrol vessel. In late 2020, a collective of Scandinavian polar adventurers — an accomplished wildlife photographer, a ship’s officer, and an expedition leader — purchased the cruiser and transformed it into an unabashedly high-end expedition vessel. The target audience? Intrepid travelers who yearn for adventure, but still demand the highest levels of comfort.

Once able to sleep 60 passengers, the Explorer now accommodates just 12 in seven cabins, which range in size from 131 to 229 square feet. A helipad facilitates sightseeing flights over icebergs and floes; there are two Zodiacs (as well as kayaks and stand-up paddleboards) for excursions. The resourceful chef on our trip was well-versed in Nordic ingredients: menus featured raw scallops with black lava salt, tender cuts of venison infused with black garlic, and the freshest haddock served with spinach and lovage.

Another key feature that sets Explorer apart is its exclusive partnership with Eyos Expeditions. Arguably the world’s preeminent experts in coordinating trips through remote maritime environments, the Eyos team on board every Explorer trip oversees logistics for itineraries that might incorporate heli-skiing jaunts to Greenland; polar-bear encounters in Svalbard, Norway; or iceberg- and penguin-spotting cruises along the Antarctic coast. Eyos usually partners with vessels that require a full charter, in which one group hires the entire vessel and crew. Some trips on Explorer, on the other hand, can be booked by individuals. While those aren’t cheap — an 11-day Svalbard sail starts at $15,685 per person, for example — they do bring the dream of once-in-a-lifetime adventure to a broader audience.

Our own Iceland itinerary provided daily reminders of why these journeys are such worthwhile investments. Shortly after leaving Reykjavík, we cruised into the open arms of Arnarfjörður, one of the largest fjords in Iceland’s northwestern reaches. We took a tender ashore, then hiked through the wild, picking plump blueberries that flourished along our route. That evening we kayaked in the bay beneath Dynjandi, a cascade of seven interconnected waterfalls that fans outward like a bridal veil. Later we sweltered in a natural geothermal pool, toasting the stars with champagne.

One of the most memorable moments came on our final full day. After touring the isolated island of Vigur, in a fjord just south of Hesteyri, we were returning to the Explorer by Zodiac, zipping past diving arctic terns and bobbing puffins. Suddenly a humpback whale breached in front of us. Our plan for sundowners back on the ship was immediately scrapped, and we spent the next hour sailing alongside our new companion.

Some of us were moved to tears by the immense display, as the whale performed a medley of tail slapping, fin waving, and fluking. It was a fitting finale for an adventure so abundantly graced with natural beauty.

A version of this story first appeared in the December 2022/January 2023 issue of Travel + Leisure under the headline "Small but Mighty." 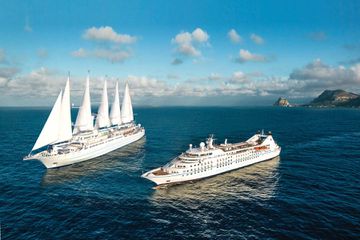 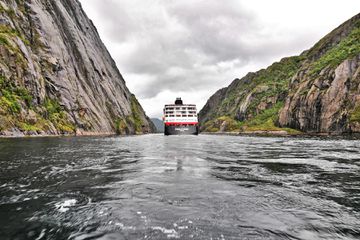