Anja Mutic
Anja Mutic has been traveling the world professionally as a writer and editor since 2000. She has penned hundreds of articles; authored more than 20 guidebooks; spoke about travel at events worldwide, and appeared as an on-screen travel expert.
Travel + Leisure Editorial Guidelines

If the thought of hiding away on a remote island, holed up with your favorite people in plush luxury perks you up, the brand-new Villa Nai 3.3 is your place. Croatia is known for the profusion of islands that dot its Adriatic coast, but it's mostly a handful that steal the spotlight. So vacationing at a small luxury hotel on an off-the-radar island in northern Dalmatia gets you serious bragging rights. How many people can say they've stayed on Dugi Otok, with a permanent population of 1,500 people, dining on fine cuisine and unwinding ensconced in five-star opulence?

Unveiled in summer 2021, with eight rooms and suites, Villa Nai 3.3 is small in size but huge in presence. The story behind it adds to the appeal. Owned by Goran and Nives Morović, it tells a tale of connection to the land and the surrounding seas. Goran, a charismatic civil engineer, hails from the village of Žman, where Villa Nai 3.3 is located and where his ancestors have lived and kept olive trees since 1607. In 2009, Goran and Nives restored the historic groves on the island's northern side, planting 1,000 new olive trees. The organic, extra-virgin olive oil the Morović family farm produces has reaped many global awards and accolades.

With the opening of Villa Nai 3.3, the olive oil farm has also become a luxury hospitality venture. The villa itself is a striking masterpiece by celebrated Croatian architect Nikola Bašić. Reminiscent of a sleek yacht moored amid olive groves, with curvaceous walls of limestone and dolomite excavated on-site, the bold building appears carved into a hillside in a Bond-esque way; You can almost see 007 himself lounging by the infinity pool.

While there's a romance to looking out over the olive groves, the real drawcard among the deluxe rooms and suites are the sea-facing units. Book Room 5 for the most dazzling vistas of the archipelago of Kornati, one of Croatia's eight national parks, through the floor-to-ceiling windows. Sailing these islands is an extraordinary way to spend a day (the concierge can arrange excursions), with great diving and snorkeling to take in the rich marine biodiversity and 682 different types of algae. There are plenty of other natural wonders on the island, too; Telašćica Nature Park has magnificent sea cliffs backed by dense forests of Aleppo pine and oak.

And yet, you may not want to leave the lair of luxury at Villa Nai 3.3, a member of Leading Hotels of the World. The eight units come with sun-dappled patios that resemble bows and sundecks and feature oversized sofas for taking in sunsets. The owners' fondness for craftsmanship, with a soft spot for Italian design, marks the interiors' aesthetic. You'll find timeless designer furniture by Giorgetti, marble bathrooms from Agape (stocked with Hermès toiletries), lighting by Artemide, and fine linen from Frette. Six of the eight units have direct pathway access to the saltwater infinity pool, where you can lounge surrounded by olive groves with views out to sea, in peace and silence (courtesy of the hotel's no-children-under-12 rules).

At Villa Nai 3.3, the olive oil takes centerstage. Even the hotel's name is a nod to the liquid gold. Nai is an old Dalmatian word for snow, which used to fall on Dugi Otok a few days per year. When there was snowfall, the olive oil harvest was said to be particularly bountiful. As a guest today, you get to tour the on-site mill and take in the sheer power of 500-year-old olive groves that stretch in every direction.

The hotel's two restaurants offer distinct dining experiences. At Grotta 11000, guests sit alfresco on the courtyard terrace with stone ovens, fired by olive and beech wood, that churn out prime meats like Wagyu roast beef and Galician burgers. The warm, handcrafted focaccia out of the oven, doused in olive oil, melts in your mouth. The 3.3 restaurant, with only 22 seats, showcases a fine dining feast powered by the micro-location. The seven-course menu champions island ingredients, from organic fruits and veggies from the orchards, herbs picked by hand, and seafood harvested from the seas. It's a culinary journey through the flavors of Dugi Otok and Dalmatia, with dishes like wild chicory risotto, Acquerello rice with scampi from the Velebit Channel, and goat cappelletti.

To round it all out, there's a small spa with an indoor saltwater pool inside an intimate grotto-like space, a Finnish sauna, and a treatment room where guests can indulge in massages using ingredients like olive pâté, said to super-charge the skin with antioxidants and vitamin E. 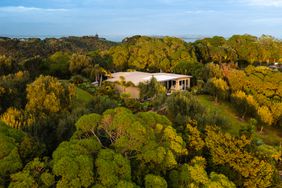 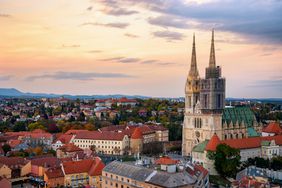