At One of Mexico's Best New Resorts, Sustainable Dining Highlights the Bounty of the Riviera Nayarit

How the chefs at One&Only Mandarina are working in harmony with the environment.

On my first night at One&Only Mandarina, 40 miles north of Puerto Vallarta, I sat at a restaurant that, I'd been told, was star chef Enrique Olvera's interpretation of a palapa: the palm-thatch and plywood structures that dot Mexico's nearly 6,000 miles of coastline where beachgoers can grab beers, fried fish, and punishingly spicy aguachile.

The description seemed like a stretch — Carao is, in fact, a fine-dining restaurant at one of Mexico's most anticipated luxury resorts. But my doubts were assuaged when the first course arrived from the open kitchen run by Jesús Durón, who has worked with Olvera since 2014. A sheaf of seaweed "chicharrón," served with sea urchin and pico de gallo, tasted like a drift of salty sea air. I was drinking wine, but I could have sworn I had a michelada in hand.

"The idea is to get the best ingredients, and then do as little to them as possible," Durón said of Carao, which takes its name from a cranelike bird now common in this region. The animal was first spotted in Nayarit in 2012, moving north as its ecosystem began to change. For Durón, cooking sustainably means adapting to these shifting realities: incorporating change into our idea of tradition, or making new traditions entirely. The "chicharrón" dish is emblematic of what he and Olvera are trying to do with their menu. Based on a typical regional snack, the sea urchin nods toward decadence — but its principal ingredients, seaweed and tapioca flour, are both accessible and sustainable to produce.

Just like the dish, the resort at large is less about spectacle and more about finding a dialogue with its immediate surroundings. One morning, I took a short hike to see the property's 500-year-old higuera blanca, or white fig, its hollow trunk marking the outline of a previous tree that it had choked on its race toward the canopy. The fig tree is now in the slow process of dying; the resort carefully preserved it during construction, aiming to display the full life cycle of the forest. I continued on to the 27,000-square-foot spa, which climbs through the canopy on a series of open terraces, its winding pathways carefully arranged to keep the trees intact.

My suite was decorated with lustrous auburn cumaru, an indigenous wood, and coal-black volcanic stone extracted from the site itself. It was one of 105 freestanding villas built into the bluffs or lifted above the canopy on stilts — a low-impact style of architecture that sits lightly over the forest. The view was not some grand panorama of verdant cliffs plunging into the aquamarine Atlantic, though there are plenty of rooms looking out over just that. Rather, my window captured a patch of open sea framed between the copper-colored branches of papelillo trees, like the view a jungle cat might have slinking through the underbrush. From my private plunge pool, I observed the strange, meditative intimacy of the water disconnected from the shore.

The restaurants are perhaps the most complete expression of Mandarina's sustainable ethos. All three menus showcase the astonishing bounty of Nayarit, with a creativity and style that never outshines the ingredients themselves. At the seafood-focused Jetty Beach Club (entrées $20–$68) — an open-air cabana run by executive chef Olivier Deboise, born and trained in France but raised principally in Mexico — I feasted on raw clams from the famed fisheries around San Blas, 60 miles north, before wading into the warm, gentle surf. At Alma (entrées $25–$60), Spanish for "soul," Deboise turned out his signature dish: petals of cured sarda, a generic term of his own invention for fatty fish like tuna and mackerel, served with shatteringly crisp homemade tostadas. Made using whatever daily catch comes in from the neighboring community of Monteón, where Duboise works closely with local fishermen, the dish allows all parties to take equal advantage of abundant species traditionally ignored on the commercial market. And back at Carao (entrées $32–$70), Durón combined his irreverent approach with a serious commitment to seasonality: abalone layered with palm hearts from the Pacific coast reminded me of China as much as Mexico, while a pristine medallion of local red snapper was slicked with Oaxacan chintextle, a rust-red paste of pasilla chiles and dried shrimp.

The origins of some of these ingredients have shifted over the years, with fish stocks in constant flux and shellfish shoals relocating as water temperatures rise. Deboise, who has worked in a succession of celebrated kitchens in Normandy, France; Mexico City; and elsewhere on the Riviera Nayarit, wants to showcase the possibilities inherent in those changes. "When people eat with us," he told me, "I want them to recognize the changes that are happening around us, so they can also understand what's happening in their own environments back home."

Near the end of my stay, I tasted a list of natural and minimal intervention wines at Alma and watched the sun sink toward the west, eventually disappearing behind a faraway cliff. Even from this high perch in the center of the resort, barely a handful of the villas made themselves seen among the trees. The water reflected shades of peach and tangerine, periwinkle and turquoise, back into the sky.

To book: oneandonlyresorts.com, doubles from $1,090

A version of this story first appeared in the April 2021 issue of Travel + Leisure under the headline At One With Nature. 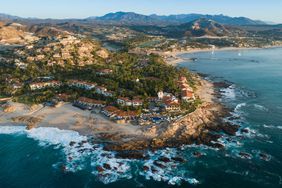 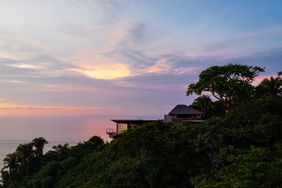