Space. Miles and miles of space. Locals seem to revel in the sheer emptiness of Namibia, and they're quick to drop into conversation the fact that, on average, there are only eight people per square mile there. Which is exactly why I keep coming back, flying from my home in Johannesburg, where we have more than 7,000 people per square mile.

I've been visiting Namibia for years, but lately — thanks in part to spending so much time in lockdown in South Africa — I've been drawn to the stark desert landscape of the Sossusvlei. Part of the Namib-Naukluft Park, this wide swath of dunes and salt flats is filled with a type of desert-adapted antelope called gemsbok as well as other wildlife. (The famously photogenic Deadvlei, with its denuded trees and ocher dunes, is a short drive away.)

Accommodations in this corner of the country have historically been simple, but that's changed thanks to the recent addition of two new lodges and a just-finished refurbishment of a luxury camp. In December, shortly after travel restrictions on entering Namibia were lifted, I set out to visit them.

The first property was a study in social distancing with panache. Desert Whisper (villa from $1,050) is a solitary one-bedroom villa on a cliff top above the sands. A sister resort, the 65-room Namib Desert Lodge, is a 15-minute drive away, but I felt blissfully alone. As light filtered through windows punched in the structure's curved weathered-steel shell, circles danced on the wooden floors. I bounced between the outdoor pool and the indoor reading nook, refilling my glass of South African sparkling wine from the en suite bar. I left the wispy linen curtains open throughout my stay, content to drink in the endless views.

Seventy miles south, I checked in to Kwessi Dunes (doubles from $1,075, all-inclusive), inside the privately managed NamibRand Nature Reserve. This massive expanse abuts the Namib-Naukluft Park, and guests have the option to embark on adventures in either. I opted first for a quad-biking trek through the private conservancy, led by veteran Namibian guide Gert Tsaobeb. Along the way, he pointed out various animal tracks — gemsbok, hyena, leopard — before we stopped for a break in the shade of some towering boulders.

Wildlife has blossomed in this stretch of seemingly uninhabitable desert, Tsaobeb told me, after a decades-long rewilding effort to convert what was once farmland back into wilderness. Thanks to a lack of light pollution, the NamibRand Nature Reserve is one of 18 certified International Dark Sky Reserves in the world — and the only one in Africa. To take advantage, each of the 12 solar-powered chalets at Kwessi Dunes has an outdoor "star bed," where guests can sleep under a vivid, twinkling sky.

Nearby, and just outside the national park, Little Kulala (doubles from $2,335) was the final stop of my weeklong visit. It was a fitting bookend to my circuit: opened in 1996 by Wilderness Safaris, Little Kulala was one of the first luxury-minded camps to put this destination on the map. Today, it's still managed by the pioneering outfitter, which has recently overhauled the interiors and redoubled the property's sustainability efforts. There are now 11 solar-powered, thatched-roof cabins; all have plunge pools and other thoughtful extras, such as exercise equipment and an activity basket filled with adult coloring books.

The best reason to stay at Little Kulala, though, may be the exclusive access that Wilderness can arrange — not only to the preserve surrounding the lodge but also to the Namib-Naukluft Park, by means of a private gate. That "back door" access means guests can get to the top sites, like the towering Dune 45, earlier than other people — and stay out later, too.

One evening, I set off for the park with a guide, Akser Simeon, and watched the twilight spill a spice rack of color across the Namibian desert. As the sun dipped below the horizon, the sands turned first a soft saffron, then cumin, cinnamon, and finally the shade of pink peppercorns. We were, it seemed, the only two people in the whole of the Deadvlei. Later, back at the camp, the light show continued. Tucked into another star bed — this one laid on the deck of my villa — I gazed up at the sequined sky. Stars emerged, then constellations, and the universe stretched on and on.

A version of this story first appeared in the June 2021 issue of Travel + Leisure under the headline Jewels in the Sand. Desert Whisper, Kwessi Dunes, and Little Kulala provided support for the reporting of this story. 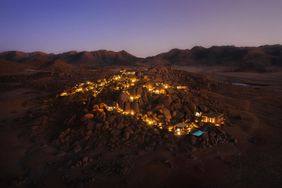 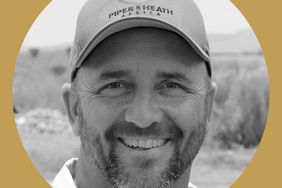