The thrilling feeling of chasing waterfalls may be off the table for most as large parts of the world continue to hunker down, but one hotel in Iceland is hoping to help you do just that — digitally, that is.

In an effort to spread the joy of the country’s breathtaking waterfalls, Ingibjörg Friðriksdóttir, the digital marketing manager of Hotel Rangá, is going on a weekly jaunt, searching for waterfalls big and small, famous and lesser-known. Each waterfall will be featured on the hotel’s Instagram page for Waterfall Wednesdays, along with information in the stories on how to get there, what the road or hike looks like, and of course, the sounds of the rushing water.

“I think there is something about the sound of the waterfall,” Friðriksdóttir told Travel + Leisure. “Even in a small waterfall ... there's still something very powerful.”

Hotel Rangá sits just over 60 miles southeast of Reykjavik and features 52 different rooms and suites, including several around-the-world-themed rooms based on different continents. The hotel’s location happens to put it right in the middle of many beautiful waterfalls.

The first featured waterfall was Árbæjarfoss, about 60 miles from the capital of Reykjavik and just over eight miles from the hotel itself. This particular waterfall features concrete walls used by salmon so they can more easily move upstream to breeding grounds, according to the hotel.

“You can go on this little journey with us. It's a way for us to explore Iceland together when we can't travel, and in the future it might be a place of interest,” she said. “It's also useful to Icelanders — Icelanders are now looking into where to go this summer… it’s a nice way to try to show Icelanders what the area has to offer.”

While the weekly waterfall check-in will include popular spots like Skógafoss and Seljalandsfoss, it will also include hidden gems, Friðriksdóttir said. The plan is to feature a new waterfall each week for the next two months -- but there are plenty of waterfalls around if they want to expand that.

“We could keep them going for the rest of the year,” she said. “There's a lot of waterfalls in the area.”

Definitely on the agenda? A trip to a waterfall in the middle of the night in the summer.

“There's something so special about the sound of nature at midnight when everything in your body tells you it's the middle of the day because it's so bright outside,” Friðriksdóttir told us.

The project was launched just days after Iceland started lifting restrictions put in place to mitigate the spread of COVID-19. While places like museums are allowed to reopen, swimming pools will remain closed.

In total, Iceland has reported 1,799 confirmed cases and 10 deaths, according to government data. 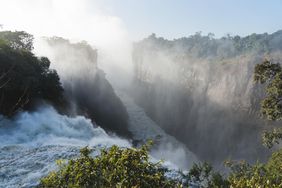