A peek inside the new property in Manhattan West.

Pardon the cliché, but when I walked into the Pendry Manhattan West, I did a kind of mental double take. Moments earlier I had been dragging a suitcase out of a taxi on 33rd Street and 10th Avenue, the sounds and smells of New York City all around me. I had been dropped off on the edge of the new Manhattan West development, the latest project from real estate power player Brookfield Properties; tourists and traffic cones abounded. And then, just like that, I was somewhere else.

Manhattan's newest hotel, which officially opened on September 17, occupies a 23-story tower designed by Skidmore, Owings & Merrill (responsible for, among countless other New York City projects, One World Trade Center and the new Moynihan Train Hall at Penn Station). In a part of town where brick high-rises and sharp-edged skyscrapers dominate, the building stands out for its relative softness, with an undulating glass facade that seems to ripple in the sunlight of early fall.

As I entered the lobby and the door closed behind me, the street noise faded to quiet. Guests are greeted by a massive fireplace — a warm sitting area with a velvet couch and a handwoven carpet beckoning them to rest for a moment. It feels like you've wandered into the resplendent Laurel Canyon home of a retired interior designer (but one who likes to surf, probably).

"We asked ourselves, 'How do we create a sense of calm in New York City?'" Michael Fuerstman, co-founder and creative director of Pendry Hotels, explained during my visit. "New York moves quickly, but you want a sanctuary, a place that makes you feel good. That's one of the themes we wanted to explore."

The hotel is the first NYC location from Pendry, a sub-brand of Orange County-based Montage International, which debuted with the Pendry San Diego in 2017 and has since opened other properties in Baltimore, Chicago, and West Hollywood. "We reinvent the wheel every time," Fuerstman said of each new project. With their latest, the Pendry team wanted to draw on their California sensibilities to create an interplay between east and west — in the U.S. context, that is.

Interiors were done by Gachot Studios (based in nearby SoHo) whose other hospitality projects include Detroit's Shinola Hotel and Eaton Workshop in Washington, D.C. The curvaceous furniture is a mix of vintage and custom in neutrals and soft jewel tones. Gachot cites the Light and Space movement of 1960s and '70s Southern California — think Robert Irwin and James Turrell — as inspiration. Light and space is certainly what hits you first; my guest room, a one-bedroom corner suite, leaned heavy on both, with wide entryways, expanses of white oak, subtle backlighting, and floor-to-ceiling windows looking onto Hudson Yards and a slice of the river beyond. There are 164 guest rooms, including 30 suites, all filled with art objects and books hand-picked by Fuerstman and his team.

Manhattan West, located directly between Penn Station and Hudson Yards, will surely be frequented by business travelers, and the Pendry provides with more than 6,000 square feet of meeting spaces and a Peloton-filled gym for road warriors in need of a workout. But as the development officially opens to the public and tries to integrate into the wider neighborhood, casual visitors will find plenty of places to linger for a drink or a meal, including several within the hotel. For cocktails, there's the knockout Bar Pendry, a jewel-box lobby lounge with gilded walls and a massive nacre-and-gold-leaf piece by New York painter Nancy Lorenz crowning the bar. In the adjacent Garden Room, all-day dishes are served among billowing tropical flora and translucent panels by Los Angeles-based light artist John Wigmore.

The next order of business will be the debut of the hotel's tentpole restaurant, Zou Zou's, from Quality Branded (the group behind NYC favorites like Don Angie and the Midtown brasserie Quality Bistro). Here, chefs Madeline Sperling and Juliana Latif (who worked together at the NoMad) will collaborate on a Middle Eastern-inflected menu in a colorful tile-covered space. Also to come is a rooftop Japanese whisky bar, opening in the spring.

Pendry is heading back west for its next project: Pendry Park City, the brand's first mountain-town property, which will open in the Utah ski haven this winter. Until then, travelers can find some wide open spaces on the west side of Manhattan. 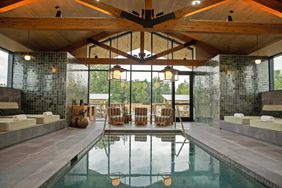 The Newest Luxury Hotel in Hudson Valley Is Now Open — With Beautiful Cottages, an On-site Farm, and a 3-mile Walking Trail 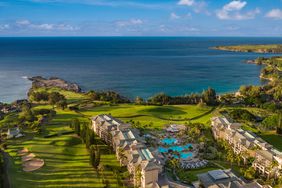 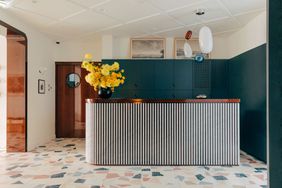 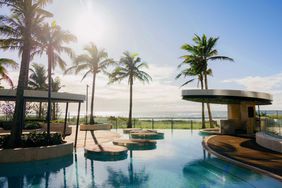 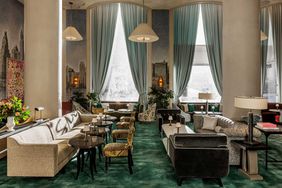