The hotel is slated to open in April.

Hard Rock is bringing the music back to a sliver of New York City that used to be the place for local musicians to shop.

The company plans to open its newest Hard Rock Hotel on W. 48th Street between 6th and 7th Ave. — sitting along a midtown Manhattan strip once known as a Music Row where musicians would shop for drumsticks, guitars, and more.

But these stores were about far more than stocking up on necessities. "Just by walking into these places you became a part of the ecclesiastical grit of rock music in New York," Thomas Beller wrote in The New Yorker.

Music Row is gone now but the new Hard Rock Hotel New York is designed to pay homage to its history. It will house a leather motorcycle jacket owned by Joey Ramone, a pair of silver patent leather boots worn by Lady Gaga, and a handwritten love letter John Lennon wrote to New York City in 1972. Meanwhile, the hotel's two story glass-enclosed Rock Star suite on the 34th floor will boast epic views and one of the city's largest hotel terraces. Unforgettable outdoor jam session, anyone?

Guests in any room will have the option of requesting Crosley record players and Fender guitars for use during their stay.

Don't worry about packing your records, though. The hotel will deliver selections from its collection directly to your room, though you likely won't be spending all that much time there.

The hotel is set to open in April and includes several areas for live performances, so don't be too surprised to discover a new favorite band in its lobby. Prices start at $395 per night and reservations are being accepted now. 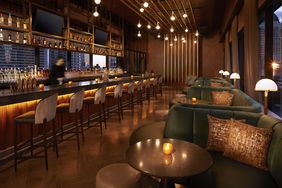 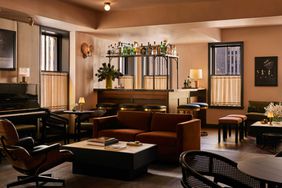