No matter your Paris fantasy, there's a hotel in the City of Light that can bring it to life. Paris is known for its clutch of distinctive properties, from a Louis XV–style manse off the Place de la Concorde to a chic hotel beloved by Coco Chanel. What's more, some Parisian grandes dames have been recently refreshed and renovated, giving travelers yet another reason to check in—or at least to stop by the lobby bar for a glass of Bordeaux. Only the very best hotels in Paris deliver that perfect mix of classic style and at-the-ready service. Here are the hotels that always impress, as selected by readers in our annual World's Best Awards survey. See the T+L Insider Video: Up-and-Coming Paris Neighborhood

This hip yet plush hangout between the Champs-Élysées and Eiffel Tower is as au courant as it was when it opened in 1911, thanks to a 2000 refurbishment courtesy of its new owner, the Sultan of Brunei. Today, the balconied freestone front is covered in signature red awnings; inside, crimson bouquets enliven nearly every surface. The bar, with a long glowing glass counter meant to resemble an iceberg, is one of the city’s hottest scenes. At the Dior Institut spa, treatments incorporate the fashion house’s fragrances. The high-ceilinged rooms mix classic marble baths and Regency- and Louis XV-style details with modern touches like remote-controlled air-conditioning and a music library with 5,000 song choices. The hotel also offers tours of its 35,000-bottle wine cellar, led by Alain Ducasse’s head sommelier, complete with a tasting.

In an unbeatable location near the Champs-Élysées, this majestic 1928 white-stone hotel redefined elegance when it reopened its doors as a Four Seasons in 1999. It's now tops with couture-clad jet-setters and bons vivants seeking a hushed city retreat with all the modern conveniences. Guests are greeted—and treated—to an eyeful of blooms upon arrival in the marble lobby; expect a sumptuous flurry of Flemish tapestries, crystal chandeliers, 19th-century furniture, and brocade fabrics throughout the public spaces. The 245 spacious rooms (doubles average a spacious 500 square feet) echo the same luxe detailing, and many rooms have private terraces overlooking the courtyard and rooftops beyond. And a heaven-can-wait full-service hotel spa adjoins an indoor pool ringed by a mural of the gardens at Versailles. But it’s chef Eric Brifford—who oversees the hotel’s Michelin two-starred restaurant, Le Cinq—who approaches godliness for his divine creations: fillet of red tuna with caviar from the Sologne region and tangy marinated vegetables, and Manjari chocolate soufflé and black-currant pulp. Lucky are the diners who can float upstairs to their rooms.

This Place de la Concorde landmark, built at the direction of King Louis XV in 1758, hasn’t lost its ornate air. Flat-screen televisions and high-speed Internet access bring modern touches to suites and salons still filled with gilt, mirrors, and Baccarat crystal, in addition to genuine Aubusson carpets and Wedgwood medallions. Even the entry-level rooms, at 115 square feet, are not unusually large, but have sitting areas and dressing rooms. The Bar du Crillon is nothing short of elegant, with its mirrored mosaics, red velvet–covered chairs, and dripping chandeliers. Request a song at the piano, then sit back on a settee and sip a Baccarat cocktail (Grand Marnier, lemon, cranberry, Champagne Rosé).

An institution since 1898, the lavish, opulent Ritz—near the Louvre museum and Tuileries gardens—has maintained its stature as one of Paris’s leading hotels despite a plethora of trendy newcomers. Of course, not everyone can claim the Ritz’s history: it was the world’s first hotel to have a private bath in every room, and everyone from Edward VII to Coco Chanel has called it home (in Chanel’s case, for 37 years). A massive renovation in 2007 updated its infrastructure, yet Belle Époque touches remain. Swan-shaped, gold-plated faucets grace the tubs; a surfeit of period Louis XV, Louis XVI, and Empire furniture fills the rooms; and thousands of euros worth of flowers scent the air each week. Traditional white-glove service, a Roman-style pool ringed with columns, and a Michelin-starred restaurant only add to this lap-of-luxury experience.

Although this grand dame—just east of the Place Charles de Gaulle—is done up in a style that’s pure French fantasy (endless toile and Louis XVI furniture), management has incorporated touches of modern cool, like Smart cars (available for shopping excursions). In 2009, a multimillion-dollar expansion brought about a new wing, adding 26 rooms and suites, and the Eric Desbordes–helmed 114 Faubourg, a fresh—but still fancy—alternative to the Bristol’s stuffier three-star Michelin Epicure (Try the monkfish and chorizo with a petite pois mousseline.) The on-site spa (formerly by Anne Sémonin and now by La Prairie) doubled in size when it opened in late 2011. Other amenities—a formal garden that’s scented with magnolias in spring, and personalized bouquets created by the hotel’s florists upon request—round out the experience.

Philippe Starck’s public-space redo of this Paris institution, adjacent to the picturesque Tuileries gardens—including the bar and three-Michelin-starred restaurant—brought surreal new touches like a refrigerator-cooled mirror that’s literally frosted, and three-legged tables dressed in fancy shoes. All tradition wasn’t cast aside: Italian craftsmen were brought in to restore the lobby’s green-and-white marble floors. Rooms, which were themselves renovated in 1998, are starting to show their age, so modern touches like iPod docks set upon the 18th-century furnishings are welcome. It’s all complemented by lots of gilt, and no less than 100 yards of Rubelli and Branquenié fabrics in each room. For such upscale digs, the Meurice is surprisingly family-friendly, offering plenty of family packages and loaning custom-made boats for sailing in the adjacent Tuileries’ boat pond.

Just steps from the Champs-Élysées and the Triangle d'Or, this 1889 townhome houses the Hôtel Lancaster Lancaster, opened in 1930 by famous Swiss hotelier Emile Wolf. In 1996 it was remodeled with Louis XV and Louis XVI furniture as well as antique lighting, gilded mirrors, and oil paintings. Each of the 57 rooms is individually decorated with muted colors and vintage chandeliers, and the bathrooms are furnished with grey marble, African iroko wood, and heated towel bars. The Michelin-starred restaurant, La Table du Lancaster, serves modern French fare from renowned chef Michel Troisgros and has seating available outside in a Japanese-style garden.

Palatial hotel with sexy interiors—a daring design departure from its more traditional neighbors—just off the Place Vendôme. The public rooms—in a palette of neutral colors, incorporating limestone and mahogany—unfold like an art gallery; Paris-based art dealer Darthea Speyer spent four years assembling a global collection of museum-worthy canvases. Up in the guest rooms, furniture is handmade, and hotel haute couture pervades. Book a massage at the spa with custom oils created by the in-house perfumer.

Located two blocks from the Arc de Triomphe in the heart of aristocratic Paris, this old-world, 83-room palace hotel has remained in the same family since its founding in 1925. Artifacts from the first generation’s collections are discreetly scattered throughout, from the Oriental rugs to a 19th-century silver serving cart in the dining room and hand-painted tiles in the bathrooms. The hotel’s rooftop garden terrace and restaurant, one of the most romantic settings in the city, is said to have lured many a head of state.

Located in St.-Germain-des-Prés, Relais Christine is a small boutique hotel just two blocks from the Seine. Built on the remains of a 13th-century abbey, the hotel incorporates original architectural elements such as centuries-old stone vaults that arch over the cavernous breakfast room. The 51 guestrooms are individually designed in either a historic or contemporary style: some include medieval wooden beams and velvet furnishings, while others contain bold-patterned wallpaper and mosaic-tiled bathrooms. Some lower-level rooms also have French windows that open directly onto the hotel’s private garden. Just off the lobby, the fireside honor bar serves cocktails in the evening. 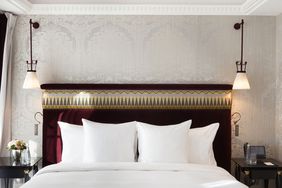 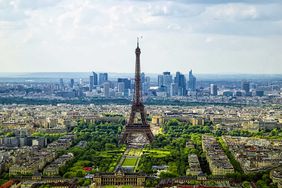 Where to Stay in Paris: The Best Neighborhoods and Hotels for Every Type of Traveler