Krampus to KFC: 11 Unique Holiday Traditions From Around the World

Here are some of the world's most unique holiday traditions.

Forget Santa. Overseas, you might be celebrating the holidays with St. Nick’s evil counterpart — Krampus.

Unique and somewhat “darker” customs are the norm in some countries, where pre-Christian and post-modern traditions create a whole different kind of Christmas experience.

More than a dozen European countries offer an evil counterpart to St. Nick, a supernatural figure charged with punishing bad children in all sorts of ways — from leaving lumps of coal in their Christmas stockings to whacking them with a birch switch. Krampus is the most prevalent, especially in Alpine and Central European nations, where many parents don hideous Krampus masks to scare their kids into being good. Sound festive?

"Weird Christmas" author Joey Green says these evil alter egos are holdovers from ancient times that are blended with customs introduced during the Middle Ages. Green explains that when the Normans invaded England in 1066, they introduced a red-robed mock king — the Lord of Misrule — to ensure that Christmas celebrations were conducted in the pagan style.

“Perhaps that explains the proliferation of other rebellious Christmas spirits,” said Green.

Rebellion isn’t always at the heart of Christmas celebrations. Japan has its own traditions, shaped in part by none other than Kentucky Fried Chicken. In the early 1970s, KFC kicked off an advertising campaign touting fried fowl as America’s favorite holiday meal. Special yuletide packaging and Santa hats on the statues of Colonel Sanders outside restaurants reinforced the message. Today, a bucket of KFC has become the Christmas dinner of choice for millions of Japanese.

Weirdness, of course, is in the eye of the beholder, so while these traditions may seem “strange” to people in the U.S., they’re normal and well-loved traditions for those who celebrate them around the world. We certainly don’t see “strangeness” as a bad thing. It goes to show that Christmas comes in all shapes and sizes. After reading about other customs below, perhaps you’ll be inspired to take on some new traditions this year. Some celebrations might be canceled or scaled back for 2020, but these traditions have stood the test of time, so we’re sure they’ll be back.

St. Nick’s devil-like counterpart has one task: to punish bad children before Christmas. In other words, his belly is not shaking like a bowl full of jelly. Instead, picture a red devil with cloven hooves, horns, and a long tongue (though he can take the form of a bearded wild man or huge hairy beast). Instead of a bag full of toys, Krampus carries chains and a basket for abducting those especially bad children and hauling them to hell. Experience this holiday tradition at Krampusnacht parties and Krampus Runs, during which rowdy revelers cavort through town in beastly costumes.

Ganna is a ball-and-stick game with high injury potential that’s part of the Ethiopian Christmas celebration. In fact, "ganna" is also their name for Christmas. According to local tradition, the biblical shepherds played the game when they first heard about the birth of Jesus. But ganna is anything but peaceful. The balls are made from olive wood or leather, which can easily knock out a player. Because there are no rules about the size of the field, the goals are sometimes so far apart that neither team scores by nightfall on Christmas Eve.

Horses and Christmas go perfectly well together in Wales. Mari Lwyd translates as “Gray Mare” and involves carting a horse — either a life-size horse figure or someone dressed as a horse — door-to-door, accompanied by a group of colorful singers and dancers. The tradition is thought to be a holdover from pagan celebrations that took place before Christmas was introduced to Wales. The ritual kicks off with traditional Welsh-language songs and a petition to enter the home for more music and merriment. It can also include a rhyme contest between the troupe and the home’s residents — a satirical back-and-forth not unlike a modern rap contest.

Evergreen trees and white, snowy landscapes may be some people’s idea of a good, traditional Christmas, but this is definitely not the case in Australia. In the land down under, December 25 falls in the middle of summer vacation, making it the perfect time to throw a yuletide beach party. One of the more popular traditions is Carols by Candlelight, where people light candles and sing holiday songs in parks and other outdoor venues (like beaches).

Traditional Christmas dinner for millions of Japanese people is not turkey or ham, but a bucket of KFC. Christmas itself isn’t really a religious holiday since most people in the country do not identify as Christian, but it’s a fun secular celebration all the same. This offbeat custom is the legacy of a 40-year-old marketing campaign wherein the fast-food chain successfully convinced would-be customers that fried chicken is the traditional American yuletide feast. In the weeks leading up to the holiday, Colonel Sanders statues outside Japanese KFCs wear Santa gear, and the chicken is served in special holiday packaging.

This tradition harks back to a fairy tale in which spiders decorated the tree of a family too poor to afford proper yuletide ornaments. The rising sun on Christmas morning makes the tree sparkle and glisten in the same manner as modern lights and tinsel. Nowadays, Ukrainian Christmas trees are covered in spider webs made from various materials including crystal, paper, metal, and plastic. Sounds a little spooky, but the trees are just as sparkly as they are in the States.

Italian children believe their Christmas gifts are delivered not by St. Nick, but by an old witch named La Befana who uses her broom to clean untidy houses. Scholars believe the neatnik witch is a medieval reincarnation of the ancient Roman deity Strenia, goddess of strength and endurance and the distributor of New Year’s gifts.

Consoada is a traditional holiday dinner on Christmas Eve that honors dead friends and relatives who can no longer join in on the holiday celebration. One normally leaves an empty chair at the table for the alminhas a penar (“souls of the dead”) who may be present at the feast. Leftovers remain on the table overnight for hungry ghosts who might drop in later.

This ceremonial “burning of the devil” is a prelude to the Guatemalan Christmas and probably a remnant from pre-Christian Mayan days. Because the devil and other evil spirits are believed to dwell in the dark, dirty corners of your home, residents are supposed to sweep up, collect garbage, and amass everything in a huge pile outside. After an effigy of the devil is placed on top, the whole thing is lit on fire, ensuring a devil-free Christmas season for all who participate.

When you think “Christmas,” you obviously think “radishes,” right? December 23 marks the Night of the Radishes in Oaxaca, Mexico. This interesting tradition is a celebration of oversized radishes, which are carved into intricate displays. It dates back to colonial times, when the Spanish introduced radishes to this region of Mexico, which is well known for its wood carving traditions. Shop owners like to use radish carvings to entice customers to come and shop, which is really the most Christmas-y thing we can think of.

Iceland has several unique Christmas traditions, ranging from the "Christmas Book Flood," when everyone receives at least one book for Christmas, to customary leaf bread. The Icelandic Yule Lads are another. During the 13 days leading up to Christmas, Yule Lads come down from the mountains to give children gifts — or potatoes. Kids put their shoes out each night, and in the morning, they'll find a small gift from the Yule Lad if they've been good, or a potato if they've been bad. 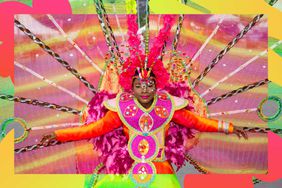 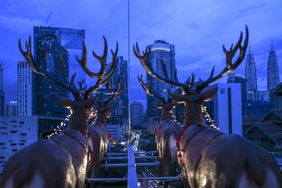 Track Santa's Trip Around the World on Christmas Eve — Here's How

15 Festive Train Rides You Can Take for the Holidays