The nativity has been lit up every year since 1961.

One of the world’s largest nativity scenes added a new, very timely figure this year.

Every year, the coastal hill in Manarola, in Italy’s Cinque Terre, is a festive spot with almost five miles of stringed lights and over 100 statues portraying the baby Jesus, Mary, and Joseph, along with shepherds, angels, fishermen, sheep, camels, and angels. In an ode to frontline workers that have helped so many amid the COVID-19 pandemic, a statue of a medic wearing a face shield has also been added to the nativity scene.

The lights have become an iconic sign of Christmas in Italy, as they can be seen from boats on the Meditteranean Sea. The nativity scene was named the largest in the world by Guinness in 2007 but has since been outgrown.

Despite many wintertime attractions like Christmas markets and ski slopes remaining closed for the holidays due to the pandemic, the coastal nativity scene is sticking to its schedule.

"We need signs of hope and at least an appearance of normality," a local who watched the lights turn on said, according to The Local Italy.

The nativity has been lit up every year since 1961 when Mario Andreoli, a local railway worker, placed a cross on a hill opposite Manarola to fulfill his father’s dying wish. Andreoli had the idea of connecting the car to a car battery and lighting it up — and the scene only grew from there.

Andreoli, now 92 years old, originally built and carried all the figurines up the hill and lighted them himself. But now a team assembles the scene.

Many attractions around the world have paid honor to the frontline workers this holiday season.

In New City, the iconic Macy’s Christmas window display this year was a thank you letter to the first responders and essential workers, New York's ABC7 reported. Further north in the U.S., the Christmas tree in Boston Common was dedicated in honor of those working on the front lines against the pandemic, according to NBC Boston. 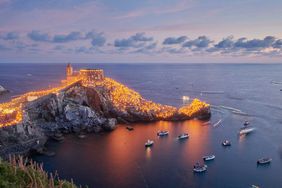 This Seaside Italian Village Is Lit Up With Thousands of Torches Every Year, and the Photos Are Pure Magic