The United States is home to more than 12,000 miles of coastline ( 12,383, to be exact). With all that land, there are more than a few hidden beaches that ocean-lovers have yet to find. From coast to coast — and tucked along the southern border — sit some of the world’s best beaches, and they're just waiting for you to explore. And what better time to head to the beach than on July 4th weekend?

With more than 10 miles of shoreline and more than 1,000 restaurants, there’s something for everyone in Myrtle Beach. It’s no surprise that people flock to the breathtaking shores each year to soak up the sun and all the fun this beach town has to offer.

And while many will likely want to head to the beach for a daytime dip, it’s worth staying well past sunset for the beach’s Fourth of July celebration, which will take place throughout the town in several different locations. So pick your favorite location, set up shop and watch the fireworks explode in the night sky from every angle.

Martha’s Vineyard, a tiny island off the coast of Cape Cod, Massachusetts, is quintessential New England. If you leave without tasting a lobster roll, some clam chowder or at least an oyster, we are pretty sure you can get fined. The island, accessible via ferry or by air, is just over 100 square miles and is divided between down-island and up-island towns. Either way you go, you’re bound to have a fantastic stay at any of the ultra-charming inns dotting the island.

For Fourth of July celebrations, head to Edgartown where fireworks will begin after dusk. The town will also host a BBQ prior to the fireworks starting at 5 p.m.

Virginia Beach has the distinct honor of being home to one of America’s best boardwalks. The boardwalk stretches for three of the 14 miles of public beach and walks visitors directly past the Atlantic Wildfowl Heritage Museum, the historic Old Coast Guard Station and even a statue of Neptune.

On the Fourth of July, Virginia Beach transforms into one of the most patriotic spots in the U.S., with a huge celebration including multiple live performances and of course an epic fireworks display.

There are many beaches in Hawaii worthy of this list, but Hapuna Beach on the Big Island is simply the most spectacular little oasis of all. The half-mile long, 200-foot wide stretch of sand offers perfect conditions for swimming, snorkeling, sunbathing, and bodyboarding almost every single day of the year.

On July Fourth, head down to Kailua Bay for a parade, beginning at 6pm, and fireworks, scheduled for 8pm.

Huntington Beach, in southern California, may be the most famous patch of sand on this list. Known as “Surf City,” Huntington has made a name for itself as the birthplace of surfing in the United States.

Huntington has a world-famous pier, which juts out into the water for 1,850 feet, plus innumerable surf shops and great waves. It’s also a prime destination for Fourth of July, when the city is taken over by concerts, fireworks, and a parade through the streets of downtown Huntington.

Rhode Island may be small, but it still has more than 100 beaches within its borders, including one of its most popular coastal areas: Narragansett Town Beach.

From the stone sea wall curving down the shore, to the historic Coast Guard house still keeping watch over the bay, the beach is the perfect pit stop for those looking to enjoy a perfect sun-filled afternoon in the smallest state in the union. If you visit Narragansett for the Fourth of July fireworks, you may want to get to the beach extra early as space comes at a premium by mid-morning. So pack a picnic and something warm to curl up in after the sun sets. The fireworks kick off just after dusk.

With its world-class restaurants, shops and Trimper’s boardwalk carousel, Ocean City Beach is a top-tier destination for families looking for fun in the sun.

While the beach offers literally hundreds of free events all summer long, its Fourth of July celebration is one not to miss. The party kicks off at 8:00 p.m. with a free concert followed by fireworks at 9:30 p.m.

Key West is home to not only the southernmost point in the continental United States, but also some of the most dazzling beaches in the country. The crystal-clear waters simply beckon you to take a dip and with a plethora of coral reefs lurking just beneath the surface you may even be greeted by a fish or two when you jump in.

Though just four miles long and two miles wide, Key West has plenty to offer travelers of all ages, from bike riding to snorkeling to fine dining to Jimmy Buffet’s Margaritaville.

And while being landlocked in Margaritaville with a key lime margarita sounds nice, the best way to experience Key West for the Fourth may be by boat. Fury, an area charter company, is offering a fireworks cruise on its catamaran. The trip costs $65.95 per person and includes drinks and snacks. The boat departs at 7:00 p.m. and lasts for about 90 minutes.

Monterey Bay isn’t just one simple beach, but instead is made up of several different options including Lovers Point beach, San Carlos beach park and Fort Ord beach.

About three hours from the Golden Gate Bridge, the Monterey Peninsula area is also home to one of the world’s most famous aquariums, and is the perfect jumping off point for quick day trips to the massive redwood forests in Big Sur and the historic boardwalk in Santa Cruz. Head down to the Monterey area for its festive Fourth of July celebration, including its Independence Day parade that attracts more than 15,000 spectators each year. Grab a seat early as the parade kicks off at 10 a.m.

West Beach is one of Alabama's finest, with its white sandy shores and quiet ambiance. It's an ideal destination for those truly looking to escape the hustle. West Beach goes on for about six miles, some of which can be found without another visitor in sight. Best of all, the entire beach is free and open to the public.

After spending a relaxing and quiet day in West Beach for Independence Day, hop in your car and drive a few minutes down the road to the Gulf State Park Pier for a one of a kind Fourth of July celebration including an impressive fireworks display, beginning at 9 p.m. off the the Gulf State Park Fishing and Education Pier.

South Padre Island is home to 34 miles of undeveloped beaches and dunes at Texas’ southernmost tip. The gorgeous landscape is why we here at Travel+Leisure previously named the beaches there as one of the best coastal views in the United States.

But the beaches of South Padre are good for more than just looking at. Adventure enthusiasts will also enjoy the excellent windsurfing, kite-surfing, or sand-surfing available up and down the coastline. If wind sports aren’t your thing you can also try paddle sports including kayaking or paddleboarding in the pristine waters.

Each and every Friday night South Padre Island celebrates like, well, the Fourth of July. At 9:15 sharp, a barge in the center of the Bay shoots fireworks into the night sky. Of course, the town provides the same show on Independence Day, too.

If you’re looking for a throwback beach vacation getaway look no further than Old Orchard Beach in Maine. Old Orchard Beach is located about 30 minutes south of Portland and has seven miles of fantastic beach as well as a historic pier and boardwalk harkening back to days gone by in the tiny New England town that was established in 1863. On the pier visitors can eat traditional New England food, play carnival games, enjoy some music or even go on a whale watching or birdwatching tour.

Throughout the summer the town invites visitors to daily local events including farmers markets, concerts, local baseball games and more. On the Fourth the town celebrates with a stunning fireworks display from 9:45 p.m. to 10 p.m. If you miss that show don’t worry, Old Orchard Beach puts on a fireworks display every Thursday night all summer long.

If you’re going to a beach in New York you might as well go all out and head to Montauk. Located at the easternmost end of Long Island, Montauk has more than 5,000 acres of parks and beaches. It’s the ultimate way to visit the Hamptons, but without having to deal with the massive crowds. And don’t worry, the area still has plenty of fantastic dining, shopping, sight-seeing and activities to keep you just as entertained as the rest of the island, including a spectacular fireworks display.

Montauk's annual fireworks display kicks off at 9 p.m. and takes place over Ocean beach just West Montauk Village. Be warned: Traffic can be intense on Independence Day so try to get to the beach early and enjoy the sights all day and night.

Miami is once again welcoming any and all visitors to come down to the shore, to not only take a dip in the crystal blue ocean lining the coast, but also to enjoy an amazing fireworks display. This year, according to Greater Miami and Beaches, Bayfront Park and Bayside Marketplace will host “America’s Birthday Bash,” with one of the largest fireworks displays in South Florida. At Bayfront Park, visitors can enjoy a free all-day event starting at 10 a.m. and lasting until midnight. Enjoy local food and drinks, giveaways, a Sam Adams Beer Garden, music and more.

Nantucket may be the most all-American little beach town on this list, and its pristine beaches, adorable seaside homes and delicious seafood make it great for an Independence Day celebration. This year, Nantucket will celebrate with a massive downtown event, complete with games, pie-eating contests, family events and more. Make sure to stay overnight as the fireworks display will come on July 5th.

From Jetties Beach guests can get an optimal view of the fireworks, which will go off at 9:00 p.m. and last until 10:00 p.m.

Odds are you’ll find somewhere to sit and celebrate the Fourth of July with your family at Long Beach Peninsula, in Washington State. After all, the beach is a whopping 28 miles long.

There, visitors can sit by the shore, hike along the community’s expansive trails, go horseback riding, grab a charter fishing boat and more. And, as the town itself notes, wild berries grow just about anywhere, so go ahead and pick a few and have a free snack on Mother Nature. Just make sure to do it before the sun goes down on Independence Day as the fireworks will go off near Bolstad Avenue beach around 10 p.m. on July 4th. 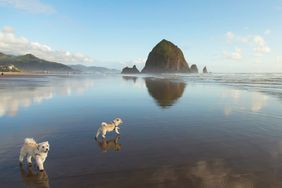 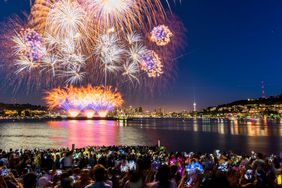 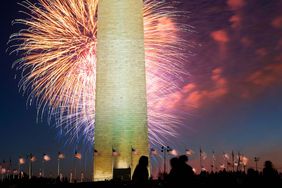 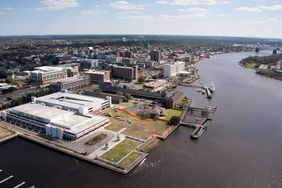