The Four Seasons brings a new level of luxury to downtown Nashville.

"I didn't realize the Four Seasons was open," my driver said to me on our way from the airport to downtown Nashville. "Actually, it's not," I noted.

The Four Seasons Hotel and Private Residences Nashville was opening the very next day, Nov. 1, and I was on my way to get a sneak peek before it welcomed its first official guests.

I thought the hotel's location in downtown's SoBro neighborhood would feel quite familiar to me — on my very first trip to Nashville nearly a decade ago, I stayed at a property just two blocks away. But over the course of that decade, Nashville has grown exponentially, and at first sight, the area was nearly unrecognizable to me. The Four Seasons is housed in one of the newest of many skyscrapers added to the Music City skyline; the hotel comprises the first 14 floors, with the residences filling the rest of the sleek glass tower.

But a quick stroll around the block quickly refreshed my memory — all the big landmarks were still there, from the Schermerhorn Symphony Center and Bridgestone Arena to the Johnny Cash Museum and Country Music Hall of Fame and Museum. Quite frankly, the Four Seasons is in one of the most centrally located spots in all of Nashville, just two blocks south of Broadway (hence "SoBro") and its rowdy honky-tonks, across from the scenic Cumberland River, and within walking distance of Nissan Stadium.

Despite being in the midst of some fairly lively action, the Four Seasons feels more like a sanctuary — or at least its guest rooms do. (You better believe there's live music in the bar downstairs.) My one-bedroom suite had a warm, industrial-meets-midcentury look, with a muted neutral palette accented by a few punchy patterns, like houndstooth wallpaper in the powder room. Succulents added a hint of greenery, reflected by the panoramic views of Tennessee's rolling hills from my floor-to-ceiling windows.

The hotel's general manager, Richard Poskanzer, a two-decade Four Seasons veteran, later pointed out some cheeky design touches in the rooms. "The activity table in the guest rooms is meant to symbolize a record player, and the lights that come over the chaise lounge represent a few different styles of microphones," he said. (To actually play music in the rooms, though, there's a Tivoli Bluetooth speaker and wireless charging port on the nightstand.) Poskanzer also noted the dark walnut used throughout both the guest rooms and public spaces, which is native to Tennessee.

After a relatively long travel day, I was thrilled to spot the stand-alone soaking tub in my bathroom, plus the aromatic Grown Alchemist toiletries, which contributed to the perfect wind-down experience. And despite being so close to the Halloween revelers on Broadway, I didn't hear a peep and slept soundly.

On the morning of opening day, I gathered in the lobby with hotel staff, who had been preparing for this moment for a year and a half — cheers went up as the revolving front door was ceremoniously unlocked.

"I don't think it could be a better fit for the Four Seasons," Poskanzer said about bringing the brand to Nashville. "You take Southern hospitality, which is so genuine and heartfelt, and then you take Four Seasons' intuitive service touches and you marry them together."

I, for one, felt those intuitive service touches right away. In the afternoon, I took a stroll around town with the hotel's director of PR, Robert Chinman, stopping at local staple Merchants for a fried green tomato grilled cheese, boot store Tecovas for a shoe shine, and Robert's Western World for some live music and a PBR — all activities the hotel concierge would happily recommend to guests for a fun downtown experience. (You better believe this is not the stuffy Four Seasons brand from yesteryear.)

As we were listening to the band at Robert's, my phone lit up with a text message from the hotel. I had inadvertently left the "do not disturb" light on in my room, and Darius from the housekeeping team wanted to let me know that I could ask them for service any time. I messaged him back to let him know I was out for the afternoon, and the team promptly attended to my room. Intuitive service, indeed.

As we arrived back at the hotel, I noticed it was already buzzing; cars were pulling up to the valet, and guests and curious passersby were sitting at the bar at Mimo, the on-site restaurant, just off the lobby. And, this being Nashville, a band was gearing up to play.

But I was heading for a more private musical experience. The Four Seasons has partnered with local business Songwriter City to create Suite Sounds, a package in which guests booked in suites can enjoy a private acoustic concert by a Nashville-based songwriter. For me, the team brought in Kelly Archer, a 20-year Nashville resident originally from Vancouver who has written songs for the likes of Brett Young, Justin Moore, and Travis Denning, among many other country talents.

The experience isn't only a concert — it's a chance to have conversations with the songwriters about their experiences, their creative process, and pretty much anything you're curious about. Kelly, for instance, shared her love of that Tennessee walnut seen across the hotel and of the midcentury furniture in the room.

Suite Sounds also includes pre-show snacks and cocktails made in-suite by one of the hotel's resident mixologists. (Shout out to Jeremy for the negronis, which were the perfect preamble to dinner at Mimo.)

Mimo is a Southern Italian–meets–Southern American restaurant headed by chef Aniello "Nello" Turco, a Noma alum who spent five years at Mio in Beijing, which earned a Michelin star under his leadership. Naturally, my dining companions and I decided to let him guide us through the menu, and that decision did not disappoint. To start, a mini lobster roll with gold leaf and arancini, plus sourdough with whipped Laudemio olive oil. For fish and meat, scallop gratin and grilled strip loin. And for dessert, tiramisu. But my favorite of all the courses was the pasta, for which we were served the restaurant's signature caviar linguine. During his time at Noma, chef Turco learned the art of fermentation, which he used here to bring about refreshingly tangy flavors to an otherwise creamy dish. For texture, he added the southern icon okra — not the mucilaginous okra you've had before, but a fried version for the perfect crunch. On the drink menu were seasonal cocktails and plenty of wine, but I ultimately opted for a mocktail: the refreshing Nashvegas, which combined citrus with coconut milk and orgeat.

After dinner, I was asked if I'd like to head to a nearby bar for a late-night show with one of the hotel's favorite bands. With a 5 a.m. pickup looming, I had to decline — with a promise that I'd return to the hotel to catch another one in the near future. And all the better, because I still have so much more of the property to explore, from the rooftop pool, which will feature a French Riviera–inspired dining spot come spring, and the hotel's spa and salon. It's safe to say I'm very much looking forward to my next visit.

Rates at the Four Seasons Hotel and Private Residences Nashville start from $500 per night; make your booking here. 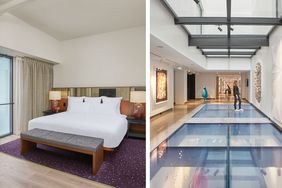 This Boutique Hotel Chain Is Also a Contemporary Art Museum 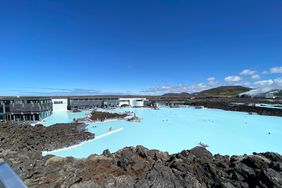 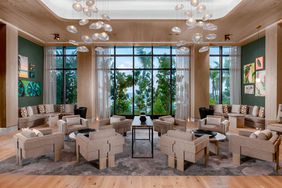