"The Lunar New Year affords us an opportunity to reflect on the diversity and regionality of China," says chef Lucas Sin.

"Lunar New Year celebrations are punctuated by food rituals," says Lucas Sin, chef at Manhattan fast-casual chain Junzi Kitchen. "A big feast on New Year's Eve, rice cakes on the first day, candy and melon seeds on the second...it's an opportunity to gather with family, reflect on the past year, and give blessings for the next."

This year, Sin is celebrating in especially delicious style. The Hong Kong-born chef has teamed up with the Met Museum to launch a limited-edition run of chili oils inspired by "Celebrating the Year of the Ox" — a new exhibition, on display through Jan. 17, 2022, that showcases depictions of oxen and water buffalo over 3,000 years of Chinese art.

"Junzi has always been excited about collaborations between restaurants and art institutions," says Sin; during "normal times," the chef regularly works with artists and gallerists for events like the Chef's Study dinner series, weaving Chinese history and aesthetics into his cooking. The Met project allowed him to channel the depth and breadth of Chinese art over the millennia. And like the exhibition, he says, "the Lunar New Year affords us an opportunity to reflect on the diversity and regionality of China."

To create the special-edition oils, the Junzi team drew inspiration from the many works in the Met's collection of Asian art. Among the standouts in the "Year of the Ox" exhibition: a wine container in the shape of an ox created between 1,600 and 1,000 BCE; a bronze ox sculpture, inlaid with gold and jade, from the late Zhou dynasty; and a set of 8th-century ceramics in the shapes of all 12 Zodiac animals. The labels on the jars feature one particularly special object: an 18th-century jade figurine dubbed "Herdboy with Water Buffalo."

"The brilliance of chili oil," says Sin, "is that it goes on everything." In addition to Junzi's classic chili oil — the spiciest in the set — he also created two flavors exclusively for the Met. "Silk Road" traces the movement of flavors along these historic trade routes, with aromatic ingredients like Afghan cumin, Indian turmeric, and Egyptian fennel. (Sin says this one takes on a new dimension when used during cooking, as for mapo tofu or meat braises.) "Red Lantern" brings the heat with lantern chilis, complexly flavored peppers from the province of Guizhou, ideal as a condiment over dumplings, soup noodles, and eggs.

Junzi Kitchen will donate half of the proceeds to the Met to further the museum's conservation efforts. The Celebration Chili Oil set ($48) and single jar ($16) will be available online and at the museum on Feb. 28; pre-orders are now open at shopjunzi.com. 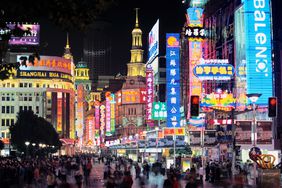