The restaurant is already serving approximately 2,000 meals a day.

Proof the old stigma about awful airline food is gone? Last Thursday, more than 100 non-travelers craving a taste of in-flight dining flocked to a pop-up restaurant offering meals usually served up in the air.

Thai Airways, which has been grounded through October, transformed the cafeteria of its own offices in Bangkok into a themed restaurant to mimic the flight experience.

After all, the airline has been known for its elevated dining. Even the economy class meals are farm-sourced and prepared with the “best quality and freshest of ingredients,” according to the carrier’s site.

Just like on board a real flight, the cabin crew welcomes visitors in uniform as they enter the space that’s been decked out with airline seats and “spare parts from engines, windows, and fan blades,” Thai Airways Catering’s managing director, Varangkana Luerojvong, told Reuters. To make the experience interactive, QR codes on all the pieces link to information about what the parts do, so that visitors also get to snack on aviation trivia as they’re dining.

The restaurant is already serving approximately 2,000 meals a day — a welcome relief for the airline which had to file for bankruptcy protection back in May and is awaiting a Sept. 14 court decision to approve its restructuring proposal.

Thai Airways began catering to grounded passengers back in April with a premium menu meal box for home delivery or pick-up.

And it’s not the only airline to have done so. Cathay Pacific started selling meals to its Hong Kong staff and Tamam Kitchen, which prepares food for El Al and Turkish Airlines in Tel Aviv, pivoted to low-cost delivery meals in July for as little as $3 a tray.

Here in the U.S., the company GNS Nuts, which provides in-flight nuts to American Airlines and United, started selling their products online after they were left with more than 87,000 pounds of nuts. The surplus grocery delivery service Imperfect Foods also offered cheese and snacks from JetBlue back in May.

Even before the pandemic, airline food had been finding a market on the ground. AirAsia opened a restaurant at the Mid Valley Megamall in Kuala Lumpur last December that serves in-flight food, including satay skewers and nasi lemak, at the mall. 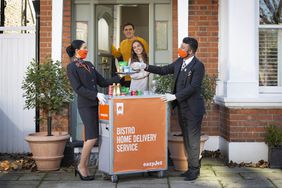