The Emmy- and James Beard Award-winning TV personality is crashing family meals around the country to document the tradition for his new show.

For the last 18 years, Andrew Zimmern has become known for his adventurous style of eating, most notably as he searched the globe for unusual meals on Bizarre Foods and as he revealed his favorite local finds on The Zimmern List.

Throughout those TV series, especially Bizarre Foods, there was a subtle Easter egg hidden. "We put a family dinner scene in every episode of the show — we didn't draw a big circle around it or a giant yellow arrow pointing at it," the Emmy- and James Beard Award-winning TV personality and chef tells Travel + Leisure. "A family eating together was the best way to show the rest of the world what that culture and what eating was like, and I thought that if we could see ourselves in family dinner tables halfway around the world reflected back at us, it would make the world a better place."

Now, the tradition is getting its moment in the spotlight with his newest show, Family Dinner, which premiered July 15 on both Discovery+ and the upcoming Magnolia app, which is part of Chip and Joanna Gaines' new multi-platform Magnolia Network, a rebranding of the DIY Network that officially launches January 2022. (Six episodes are currently available as part of a network preview on Discovery.)

Part of Zimmern's fascination with family dinners came from his own lack of them because of his parents' divorce at a young age. "With the breaking apart of our extended family, I started to spend a lot of time at my friends' houses growing up," he says. "What I learned there was an incredible diversity of ways in which people celebrated an ordinary weeknight dinner and also holidays. Everyone's family did it differently — and I think that always stuck with me. So much was the same, but so much was different."

Instead, he and his dad started their own food tradition, eating their way around his native New York City, indulging in burgers at JG Melon, dim sum at Nom Wah, bagels with schmear at Russ & Daughters, pizza at Di Fara, and seafood at Randazzo's on Arthur Avenue in the Bronx.

But he always relished the idea of sitting down at a table, too. So, for Family Dinner, he travels the country, joining a diverse repertoire of families as they share their meals with him.

"With the families, I've never felt like a stranger," Zimmern tells T+L. "I'm the agent provocateur, I'm the person who's pushing them…to share things that they've never shared outside of their family with an audience all around the world streaming in."

And one of those families has a recognizable last name: the Von Trapps, the real-life descendants of the family portrayed in the 1965 classic "The Sound of Music," now living in Stowe, Vermont, where they run the Trapp Family Lodge, inspired by their Austrian roots.

"The most surprising thing I learned while dining with the Von Trapps is that none of them sing," Zimmern says. "They're also kind and lovely and wonderful human beings who just want to show people that their ideas about how life should be run is worth sharing. They are hard-working individuals who've made it all for themselves from the ground up."

Another family meal he crashed was with the Leungs in New Jersey, who started a food blog called The Woks of Life to preserve their family recipes. "It reminded me that we all need to document the food of our families and traditions," he says of the family that also has a cookbook on the way. "The parents went back to China [briefly] after the kids were in college, and everyone tried to recreate the family meals. That gave them the idea to do the blog, and it just exploded from there — I adore that family!"

Along the way, Zimmern also picked up the best etiquette for joining the family table. "My number one tip for being the ultimate dinner guest is that politeness and kindness count," he tells T+L. "You always need to bring something. If you're going to be partaking in something, you should share in whatever one is partaking. And you have to understand that good conversation is what connecting with people is all about, so you have to be able to ask good questions and you need to be able to listen."

One thing there's no room for at the dinner table? Egos. Zimmern says the one mistake to avoid is to just talk about yourself. "No one is interested," he says, noting the importance of leading with empathy.

And that's exactly why he thought this was the moment for the show. "At a time...when we're so polarized and divided, when nobody thinks we have anything in common with the people down the street, when we're suspicious of our neighbors and friends, to celebrate our commonalities seems to be a responsibility," he says. "That inspired the concept of Family Dinner."

It's that basic idea that makes the show so effective. "In its simplicity is its magic — it is inspirational, it is revelatory," Zimmern says. "In every family, we can see reflections of ourselves. This may be the most universally accessible show that I've ever made. I think it's the most fascinating show that I've ever made, and I hope that [viewers] enjoy it as much as we enjoyed making it." 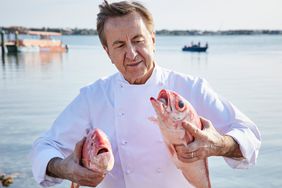