We Mapped Out the Ultimate Georgia Road Trip

A drive through Georgia showcases the best that this gorgeous, hospitable state has to offer. We partnered with Explore Georgia to lay down your route.

The Peach State is ripe with experiences, from coastal islands to big cities and everywhere in-between—and the perfect way to see it all is on a road trip from the North Georgia Mountains to the sandy shores of the Atlantic coast. We’ve put together this itinerary to help you do just that; all you need to do is bring hiking gear, comfortable walking shoes, beach essentials, and a healthy appetite for adventure (not to mention all the delicious food you’re going to eat). Get ready to find out what Southern hospitality really means—firsthand.

Fast TravelClick to jump to a destination

Charming Blue Ridge is the perfect place to start your vacation; this picturesque mountain town’s main street is chock full of shops where you can get everything from a custom-made fly fishing rod to a bottle of Georgia’s best wine. 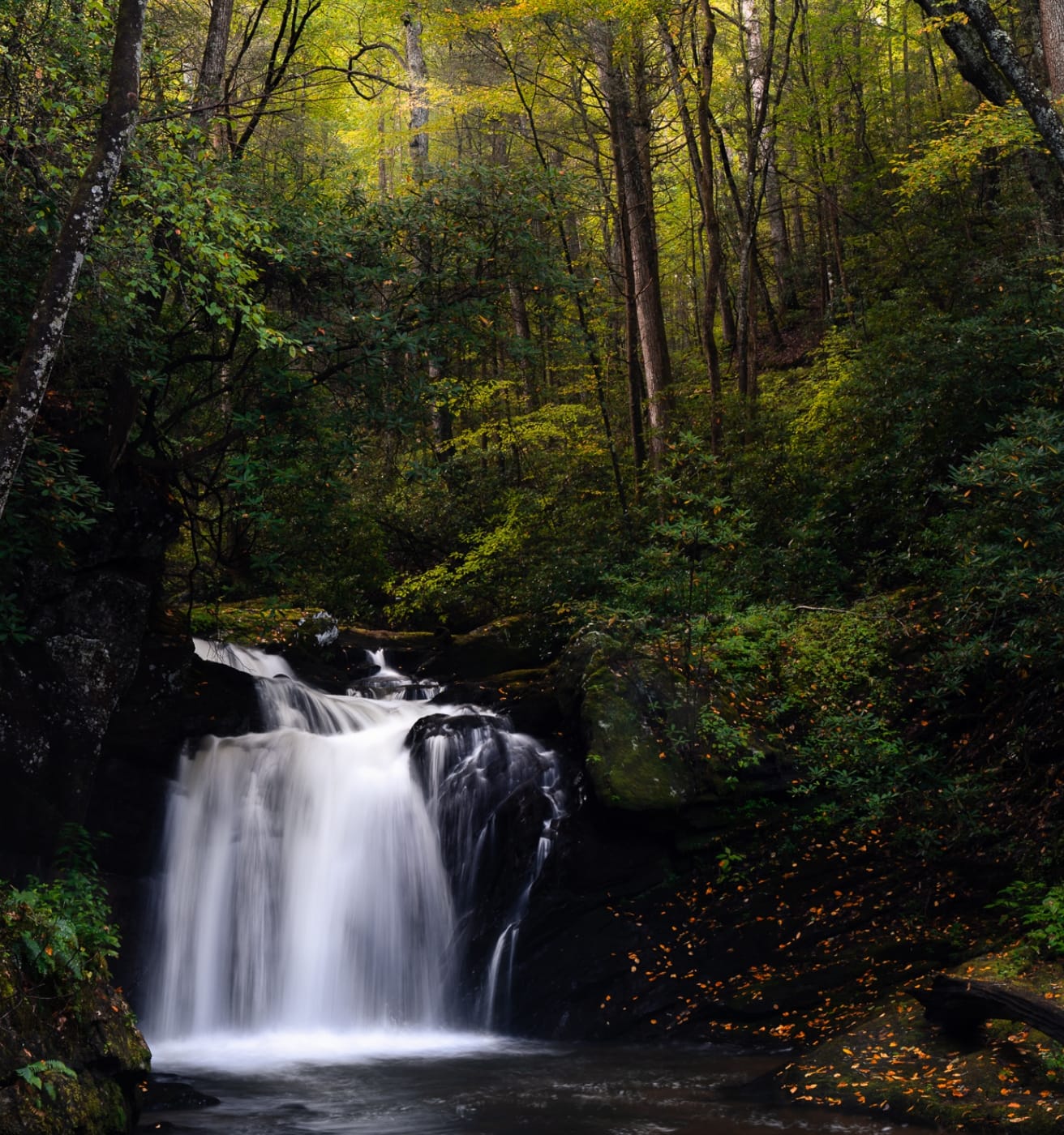 Ambitious hikers can start at Springer Mountain, the southern starting point of the famed 2,180-mile Appalachian Trail and the 300-mile Benton MacKaye Trail. Or seek out the area’s waterfalls, including Long Creek and Jacks River.

Cross the nearly 300-foot-long Swinging Bridge, the longest of its kind east of the Mississippi River. Then cool off in local waterways with water sports on the Ocoee and Toccoa Rivers or on Lake Blue Ridge. Finally, a ride on the Blue Ridge Scenic Railway is one of the most immersive ways to experience the beauty of the North Georgia Mountains. 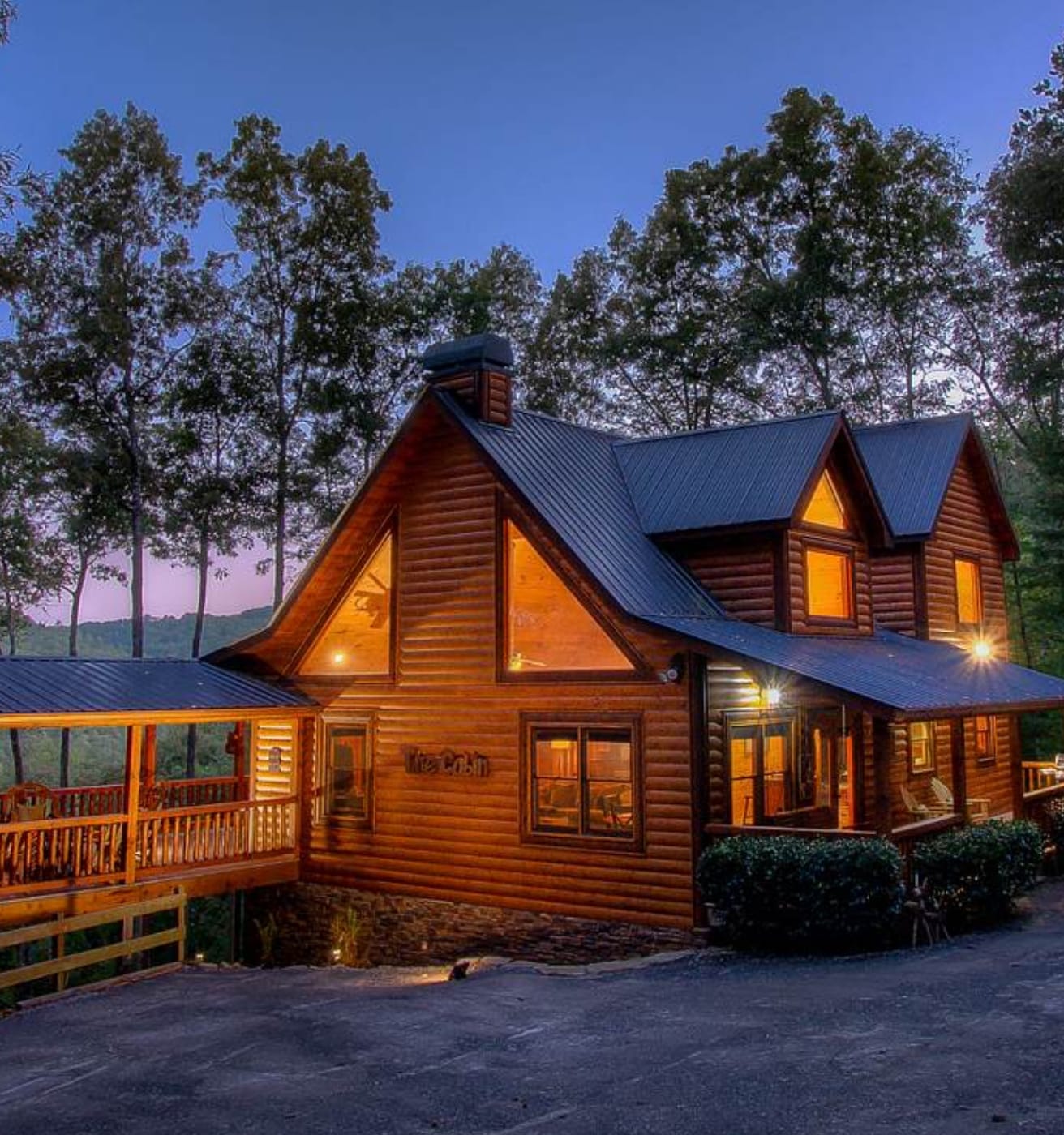 After a day of exploring, check into your cabin—the local lodging of choice—with amenities like hot tubs, fully equipped kitchens, and porches with stunning views of misty mountain valleys and swaying birch, larch, and maple trees, a.k.a. the perfect place to rest and watch the sunset. 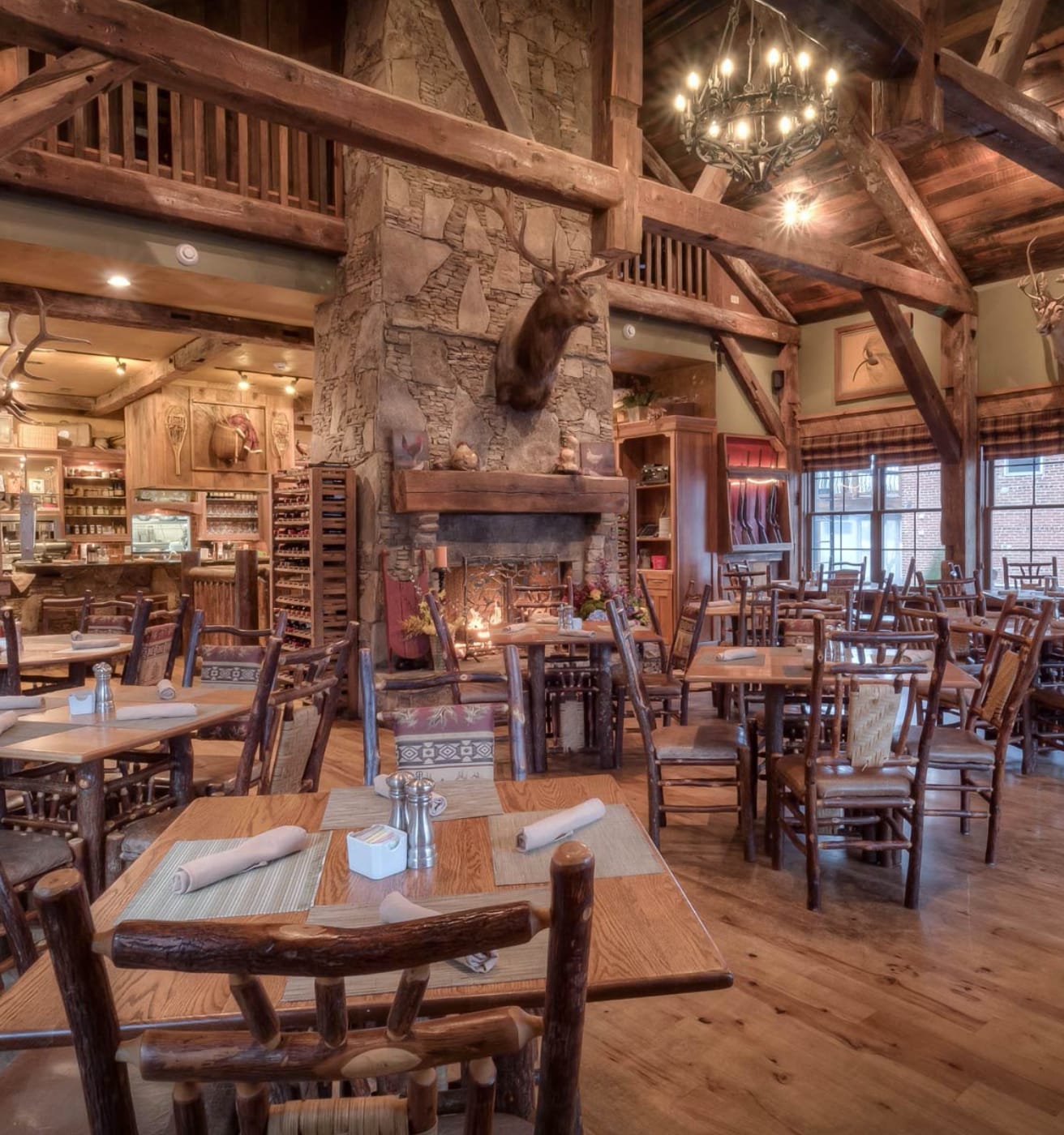 The dress code is casual at Blue Ridge’s restaurants, which highlight seasonal and local ingredients. Harvest on Main serves Southern cuisine in a mountain lodge-inspired dining room. Set in the 1914 home of the town’s early mayor, Blacksheep Restaurant & Patio serves pasta and seafood with an extensive wine list. And make sure you don’t leave without sampling cider and doughnuts at Mercier Orchards, a family-run orchard since 1943.

The next stop on our trip is…

Venture south on interstates 575 and 75 and you’ll reach the bustling state capital, where the iconic gold-domed Capitol building rises up to greet you. Atlanta has played an important role in both the civil rights movement—as the birthplace of Martin Luther King Jr.—and the music industry; both of these legacies are on full, proud display. 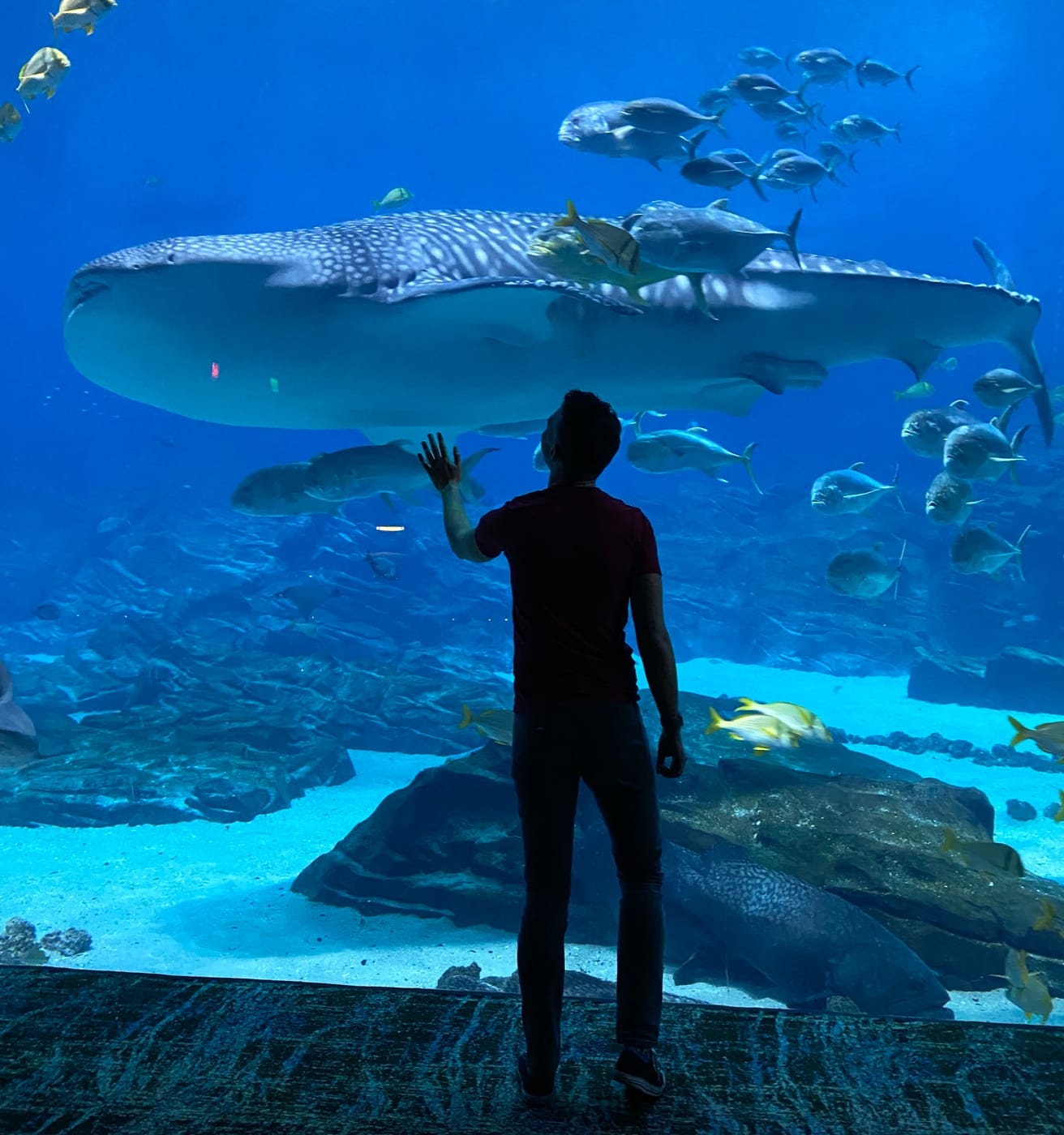 Start downtown at the National Center for Civil & Human Rights to learn about Atlanta’s role in the civil rights movement, including immersive exhibits on the Freedom Riders and an incredible collection of Martin Luther King, Jr.’s manuscripts and personal items documenting his successes and struggles. Then cross the park to see the new sharks exhibit at the Georgia Aquarium, one of the largest in the world. The Atlanta History Center & Swan House in Buckhead provides historical context to a Georgia road trip with exhibits on the 1996 Olympics and the city’s railroad history. 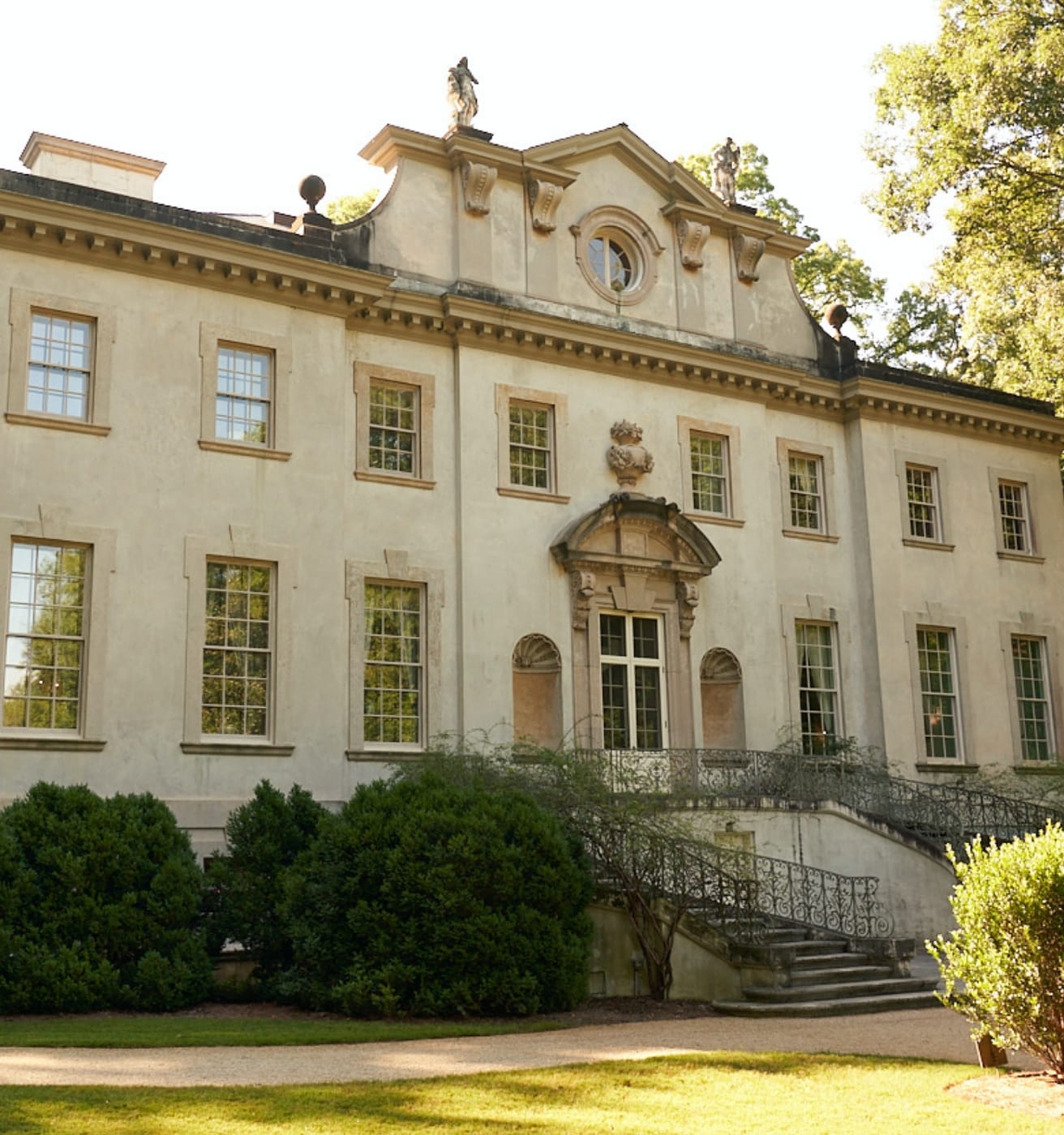 Atlanta’s green spaces give it the nickname “The City in a Forest”—and the Atlanta BeltLine is its crown jewel, a massive paved walking path around the city on a former rail line. It connects to Piedmont Park, the city’s largest park, based on designs from the Olmsted brothers. Adjacent to Piedmont, you’ll find the Atlanta Botanical Garden, which showcases dozens of species of plants and Chihuly glass sculptures.

For rainy days, browse the shops at Atlanta’s adaptive reuse spaces like Ponce City Market, a former Sears headquarters, and The Works, a restored warehouse complex with an Andrew Zimmern-backed food hall. Or, if you’re in the mood for some music, check out some of Atlanta’s legendary venues, such as The Tabernacle—located in a converted church—or the magnificent Fox Theatre, which hosts ballet and Broadway shows in addition to modern artists. 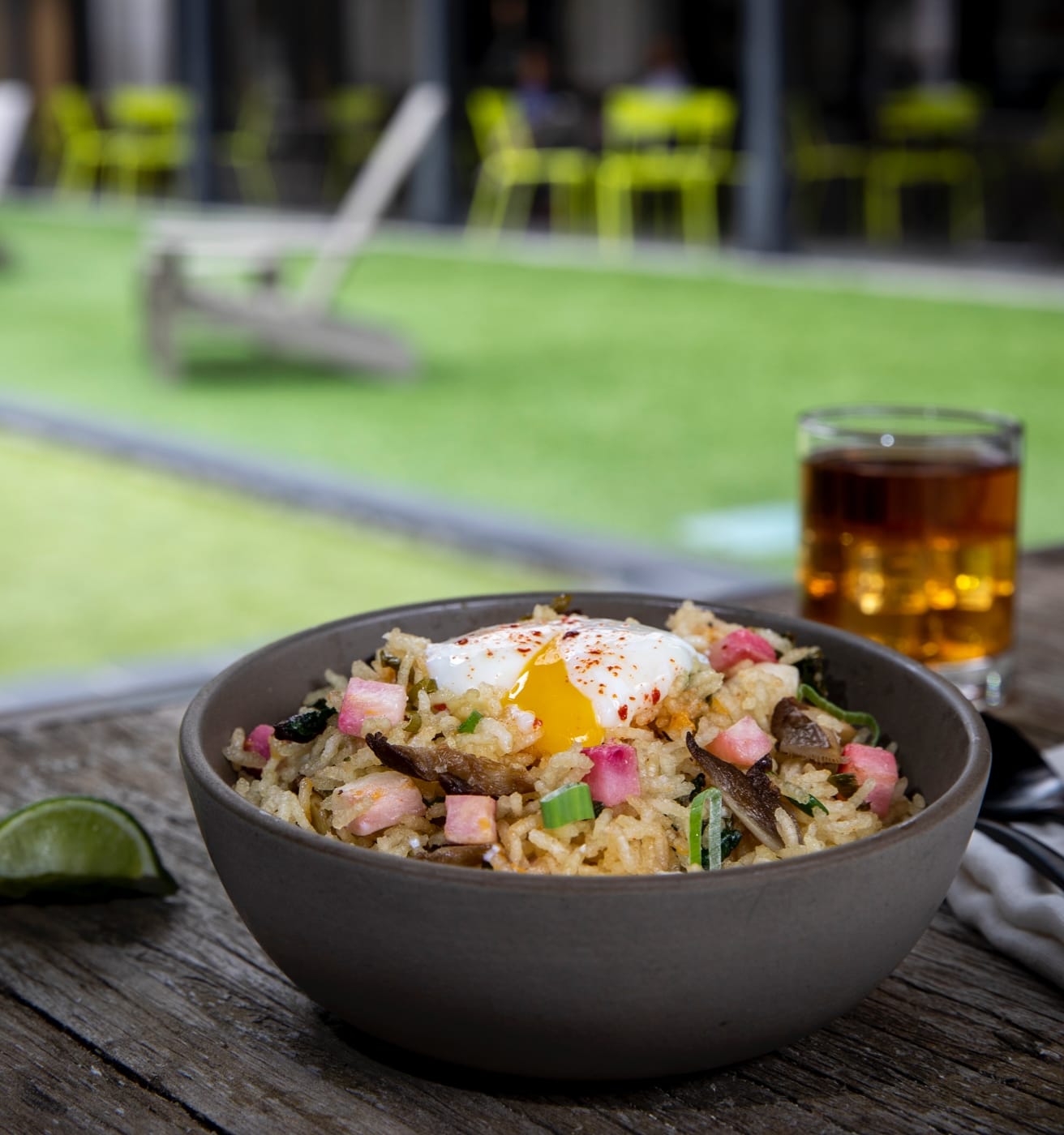 Comfortable, upscale hotel options abound: The St. Regis in Buckhead is among the most luxurious properties in the city, home to the award-winning restaurant Atlas. For a more artistically inclined crowd, The Candler Hotel is an architectural marvel located in an early 1900s Beaux Arts building constructed for former Atlanta mayor Asa Griggs Candler. Finally, high-rising Loews Atlanta Hotel's Midtown location is convenient to both Piedmont Park and local restaurants like Hugh Acheson's Empire State South. 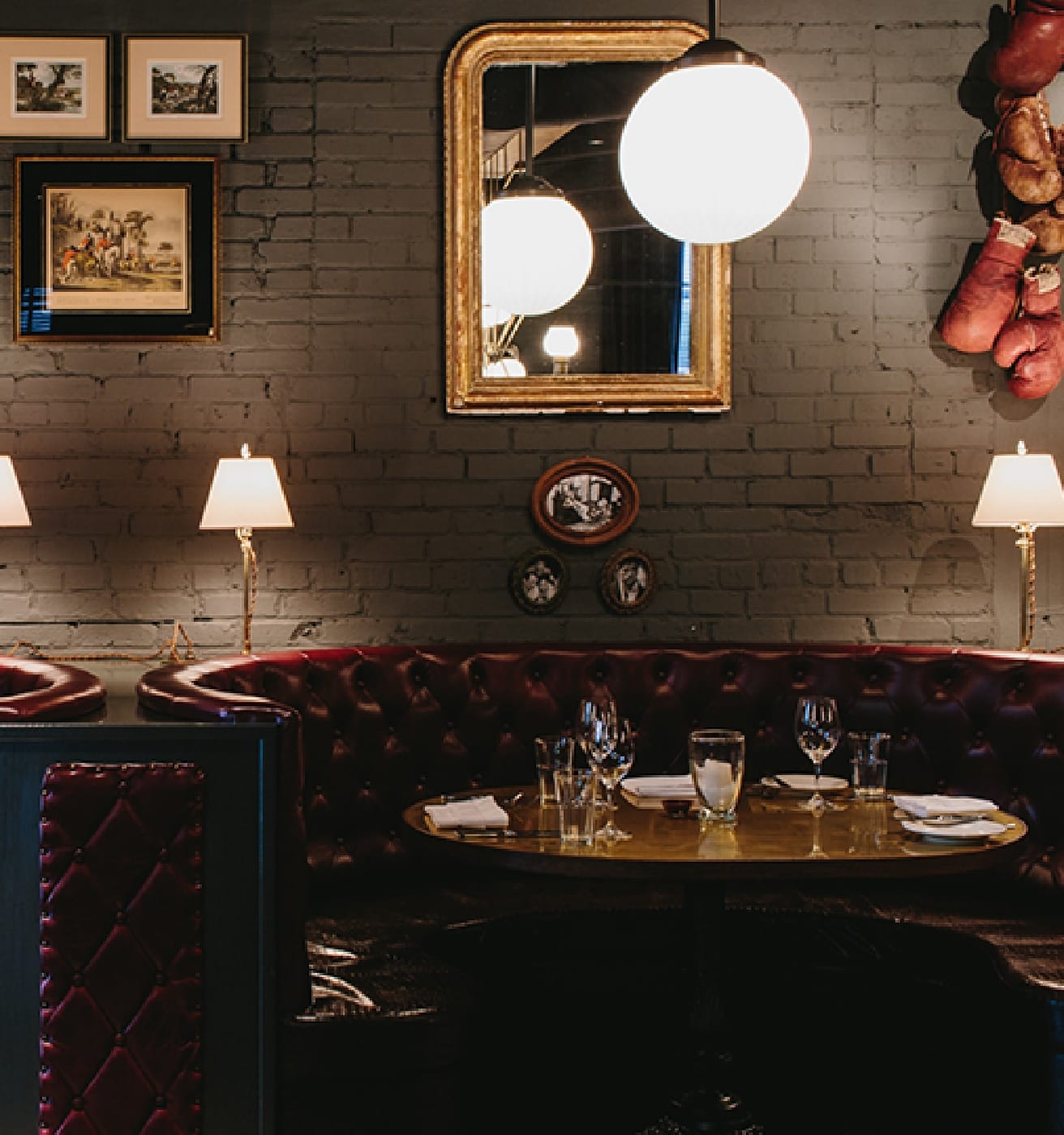 The French brasserie and steakhouse Marcel in West Midtown is just one of many eateries from acclaimed restaurateur Ford Fry, and features a massive wine catalog, cigar bar, and late-night bites. Bones in Buckhead is one of Atlanta’s oldest steakhouses and a popular spot for special occasions. Candler Park’s Lazy Betty has been named the city’s best tasting menu.

Heading East, we arrive in…

Drive east from Atlanta and you’ll reach Athens, a lively college town with ties to acts like R.E.M. and The B-52s. Catch live music at the venues that launched their careers—the Georgia Theatre, 40 Watt Club, and the Classic Center—or check out the shops downtown for fan gear and vintage clothing. 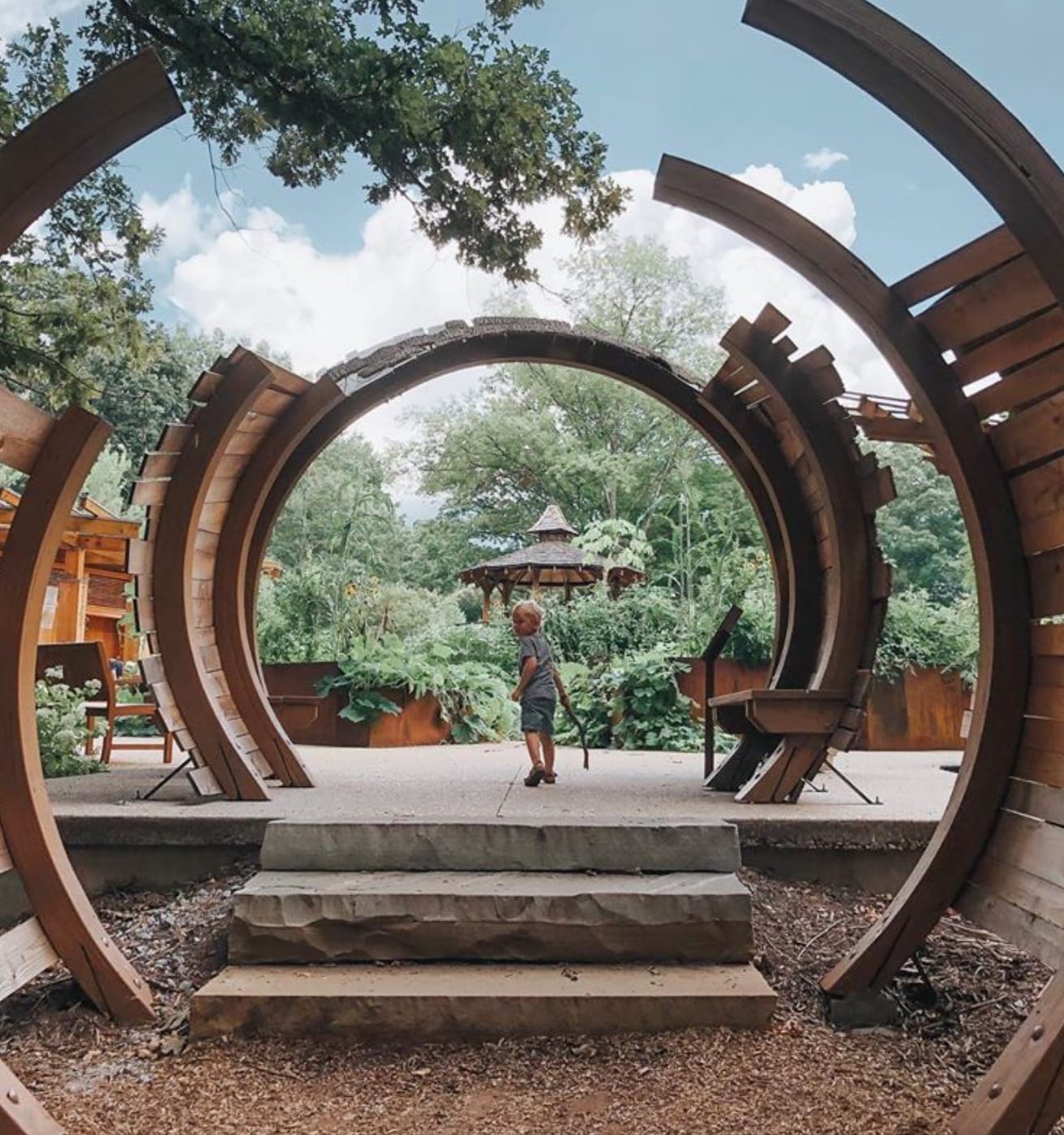 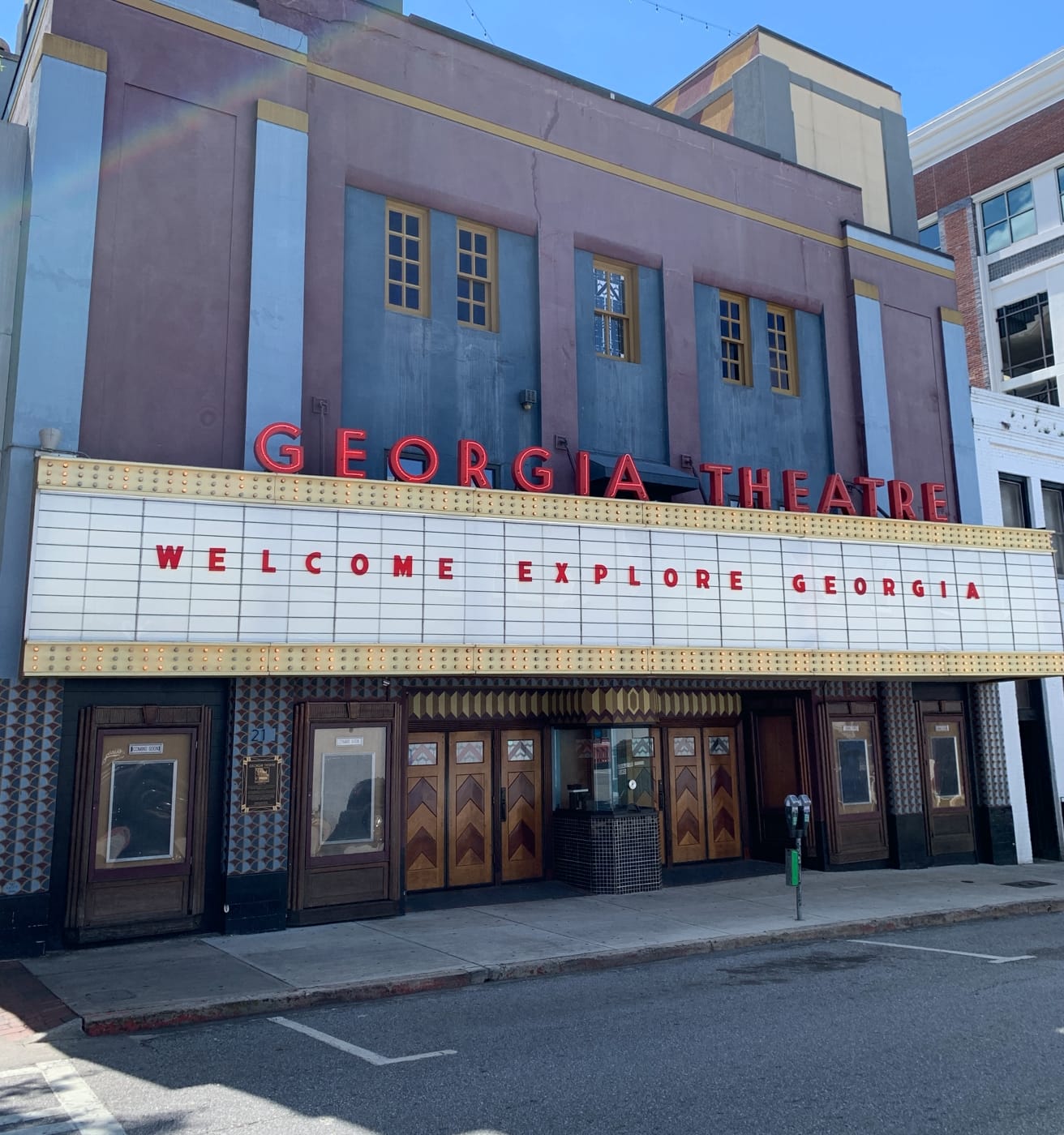 The Hotel Indigo provides a welcome—and comfortable—respite, with farmstead architecture inspired by the covered bridges of the region. 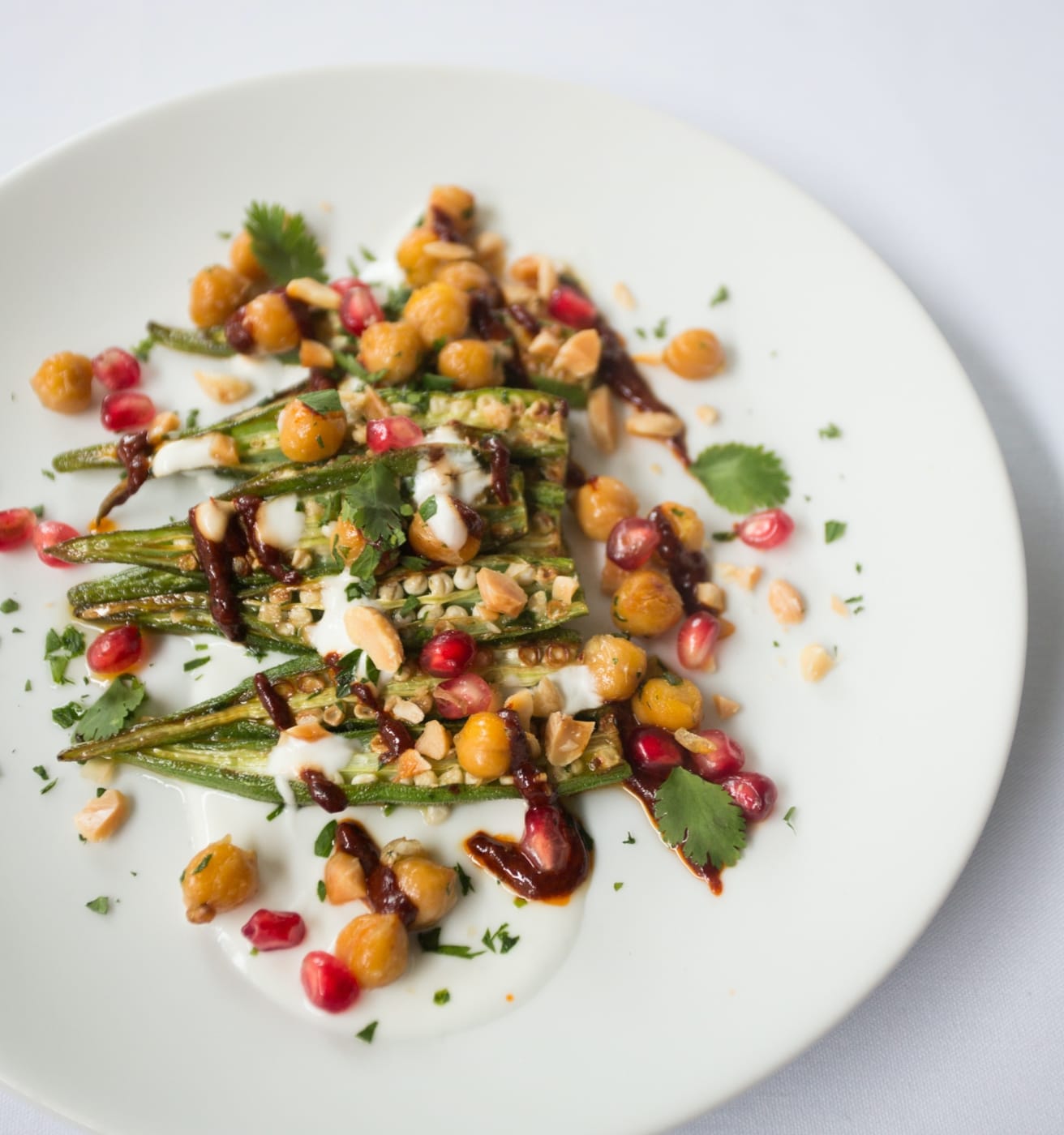 The Last Resort is a favorite of both UGA students and visiting family members, with Southern favorites like shrimp and grits, while The National serves shared plates and dishes like seared scallops and hanger steak. Relative newcomer The Expat is an Italian-inspired bistro from two former Atlanta restaurateurs, serving superb cocktails and European fare like duck breast with pickled strawberries and local greens.

Moving South, we find ourselves in…

Head south through historic communities like Watkinsville—which has a historic covered bridge and a 1700s stagecoach stop—to Madison and Greensboro, separated by the scenic beauty of Oconee National Forest. 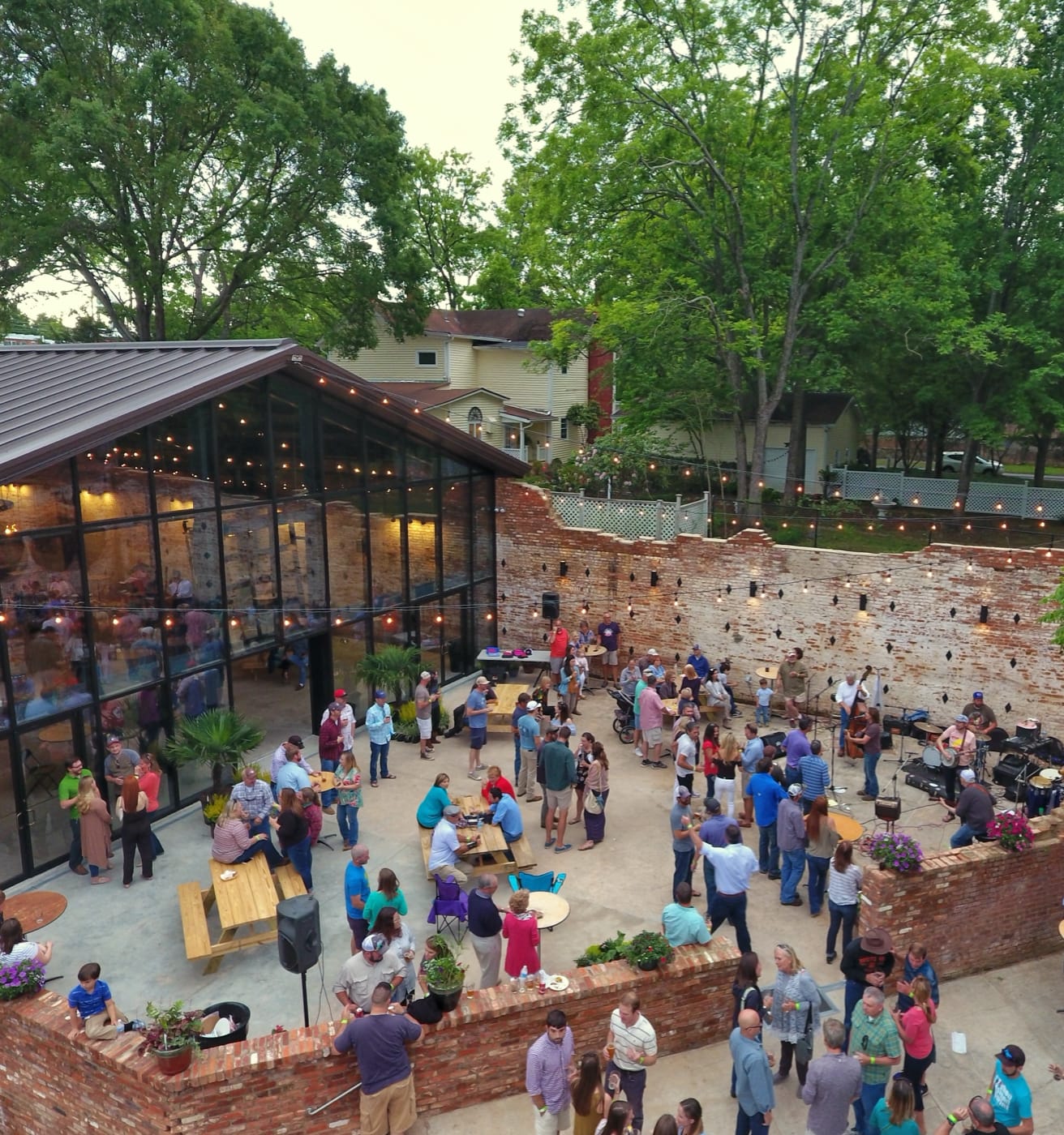 Browse Greensboro’s antique shops, tour the historic jail, or enjoy a pint at Oconee Brewing Co., the town’s first craft brewery. Madison is a short drive away; its carefully preserved 1800s-era homes now operate as inns and museums. Absorb the energy of the ancient trees on a guided hike through the Forest Therapy Trail at Hundred Acre Farm. 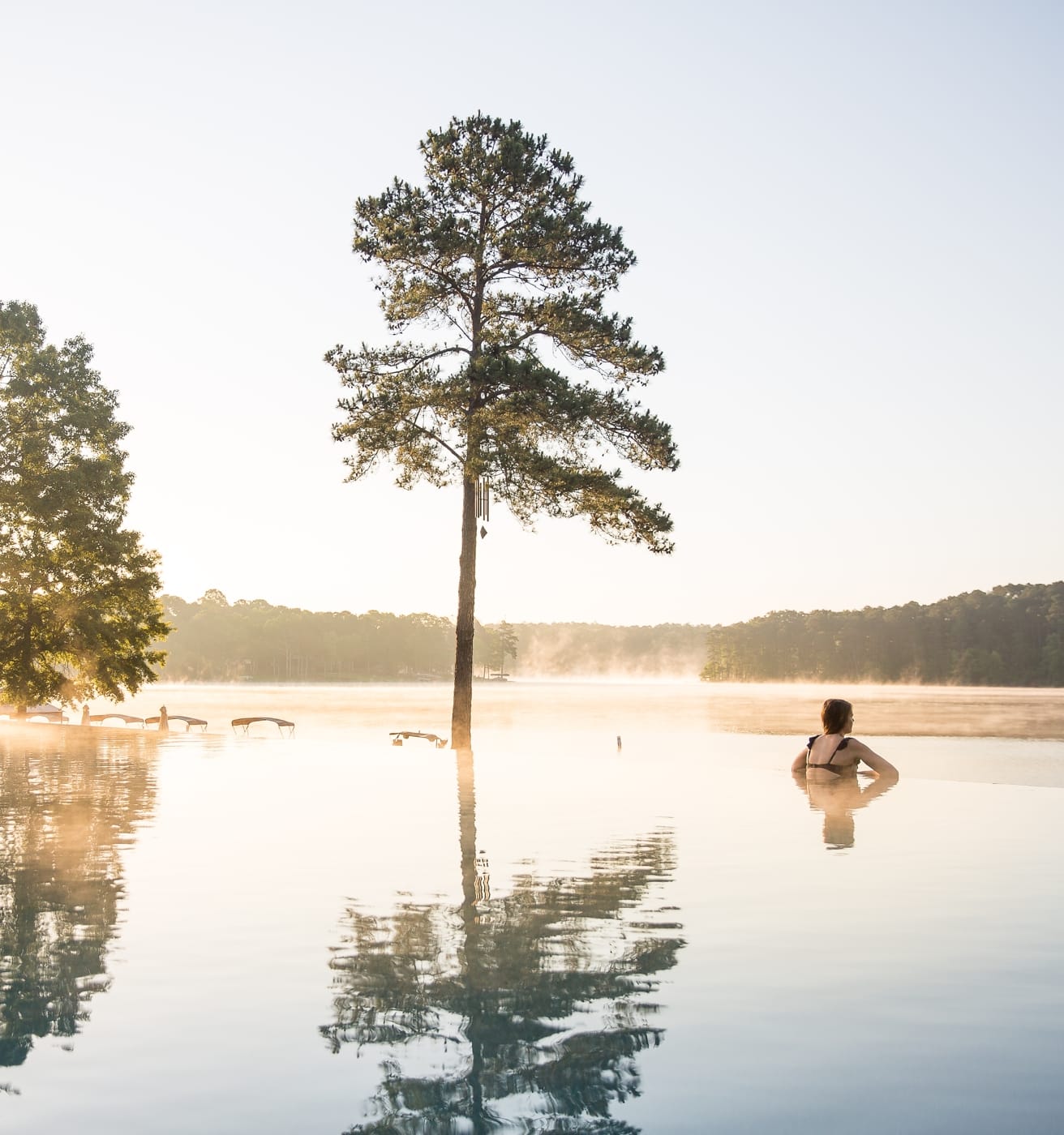 The Ritz-Carlton at Reynolds, Lake Oconee is a luxurious waterfront resort with multiple restaurants, a spa, golf courses, boating, and kayaking. Everything you need is conveniently in one place, close to both towns.

Gaby’s by the Lake 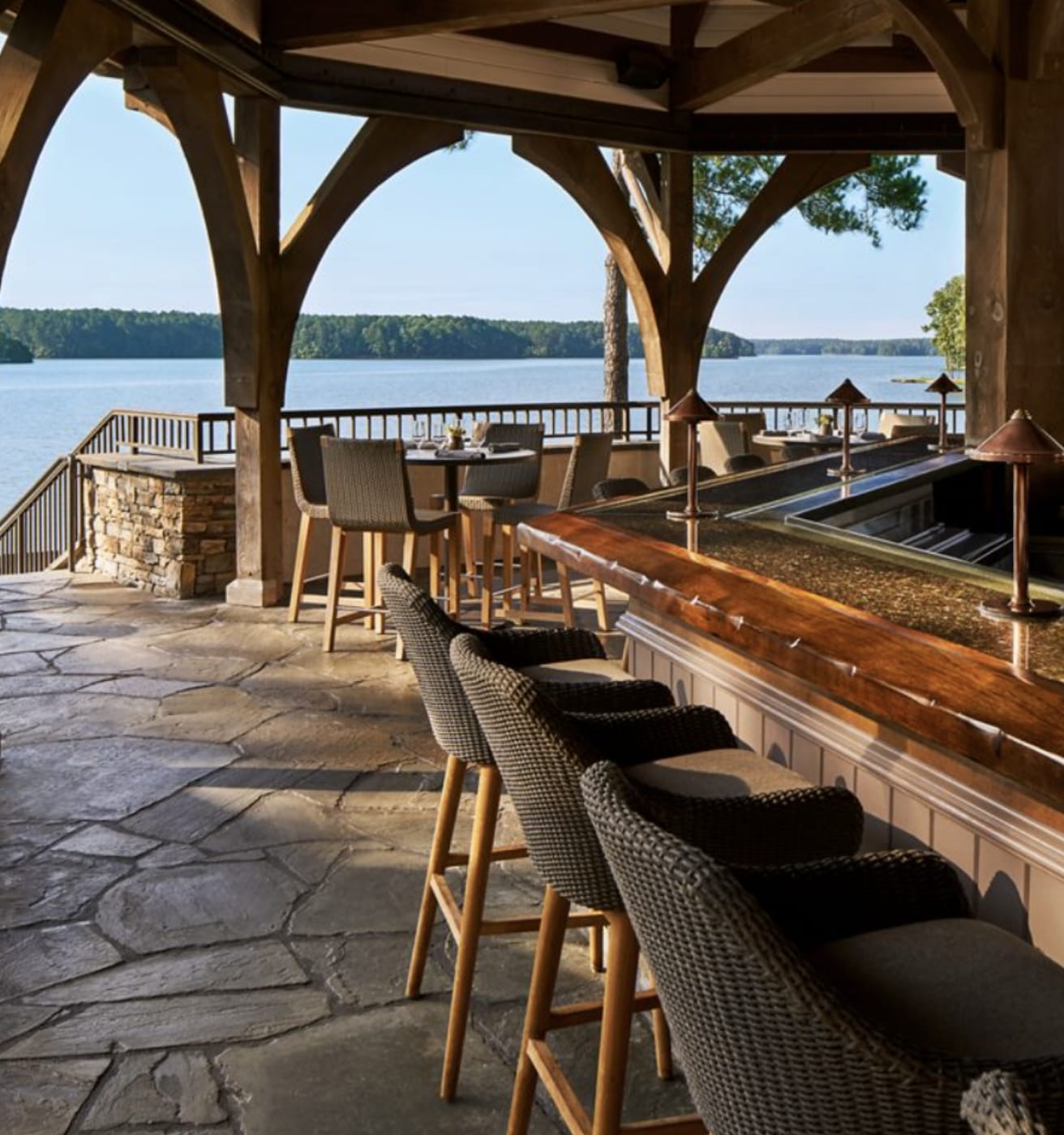 photo credit: Gaby’s by the Lake

Choose from the fish tacos and waterfront views at Gaby’s by the Lake or the upscale steakhouse cuisine and raw bar at Linger Longer Steakhouse (both of which are conveniently located at your lodging for the evening). Be sure to save room for dessert—The Yesterday Cafe in Greensboro is locally renowned for its decadent buttermilk pie.

Driving on down to the
coast, we arrive in…

Hit the backroads that connect the towns south of Greensboro, passing through Louisville, Georgia’s third capital, on your way to Spanish moss-draped Savannah, the state’s first capital—also known as the Hostess City due to its unparalleled hospitality. 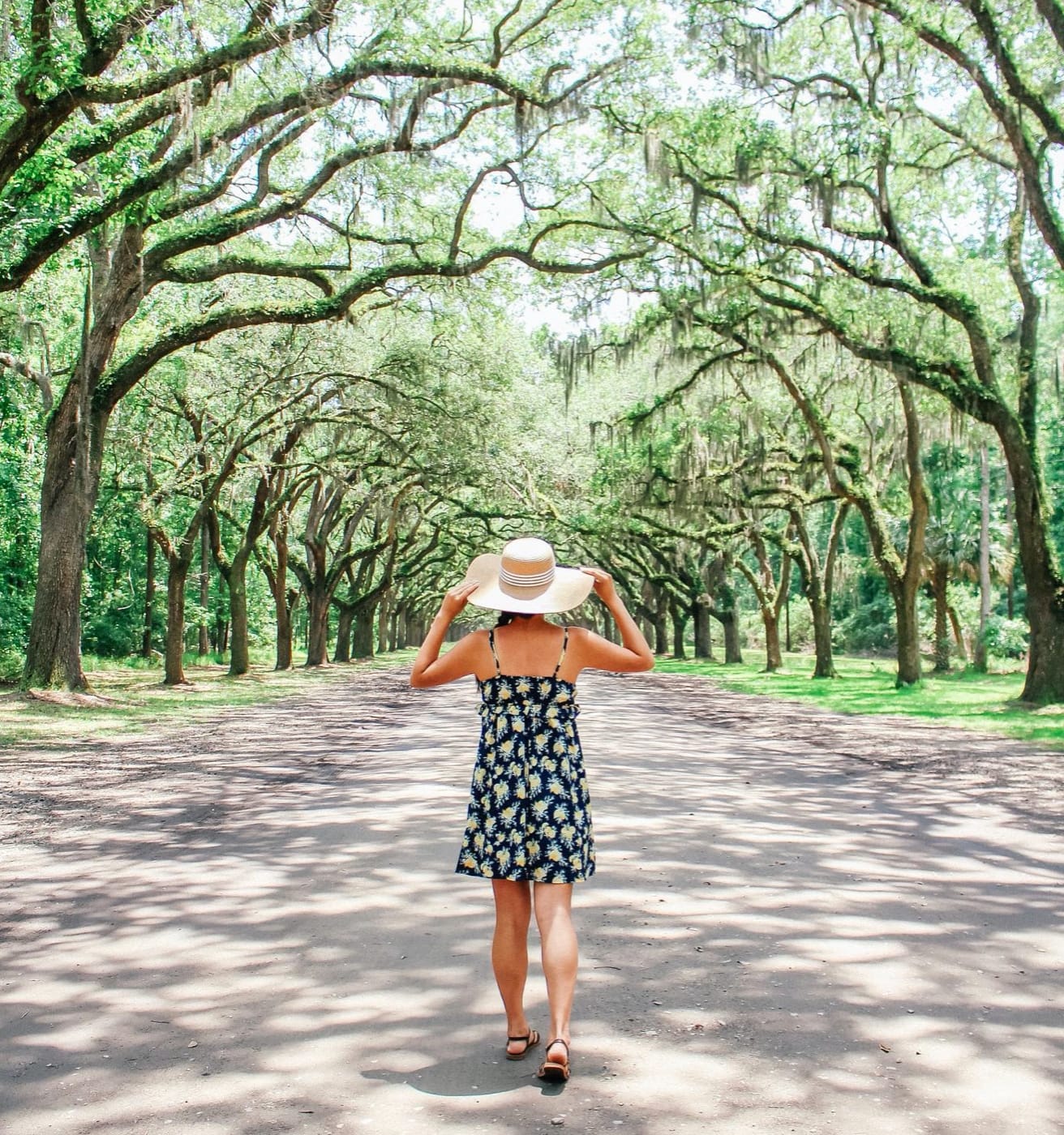 Savannah’s gorgeous city squares—placed on an easy-to-navigate grid system—truly set the city apart. Forsyth Park is one of the most beloved, home to a gorgeously photo-op-worthy fountain and a local farmer’s market. Make the drive out to Wormsloe State Historic Site, known for an iconic avenue of oaks that look straight out of a movie.

The city has a thriving arts community, centered around the Savannah College of Art and Design. Admire the work of these up-and-coming artists at the SCAD Museum of Art before grabbing a sandwich at the Gryphon Tea Room, also run by the college. Don’t skip the trendy Starland District, home to restaurants like Back in the Day Bakery and Starland Yard, along with vintage boutiques. 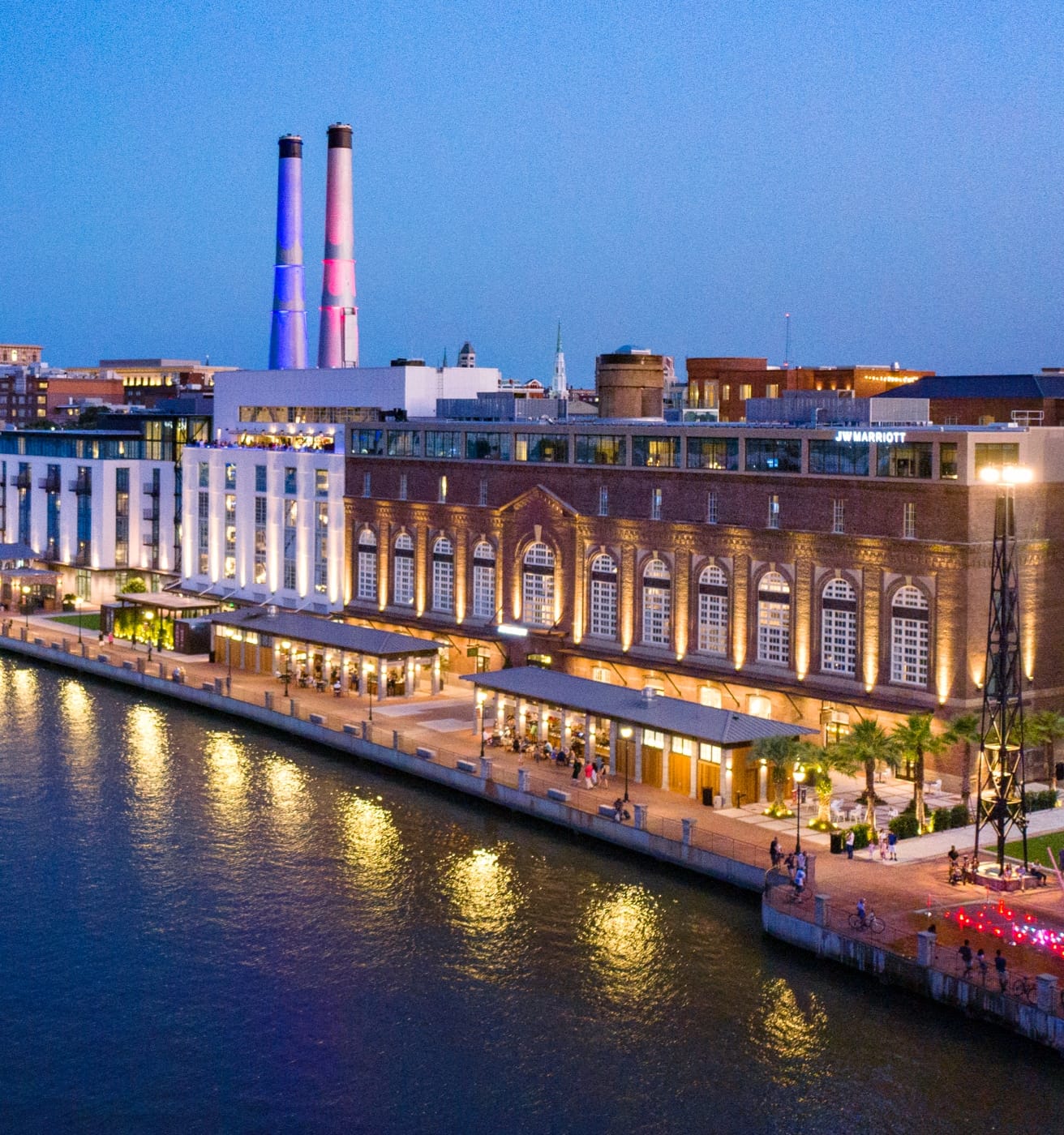 The Plant Riverside District is a hub for nightlife. Start the night at the Myrtle & Rose Rooftop Garden, where guests can enjoy cocktails as the sun sets, then transition to the Electric Moon Skytop Lounge, with a playful slide between levels, as well as lawn games.

The riverfront views and in-house museum are just part of the appeal at the JW Marriott, which opened in 2021 in the Plant Riverside District. Pamper yourself at the full-service spa or unwind in the colorful guest rooms. 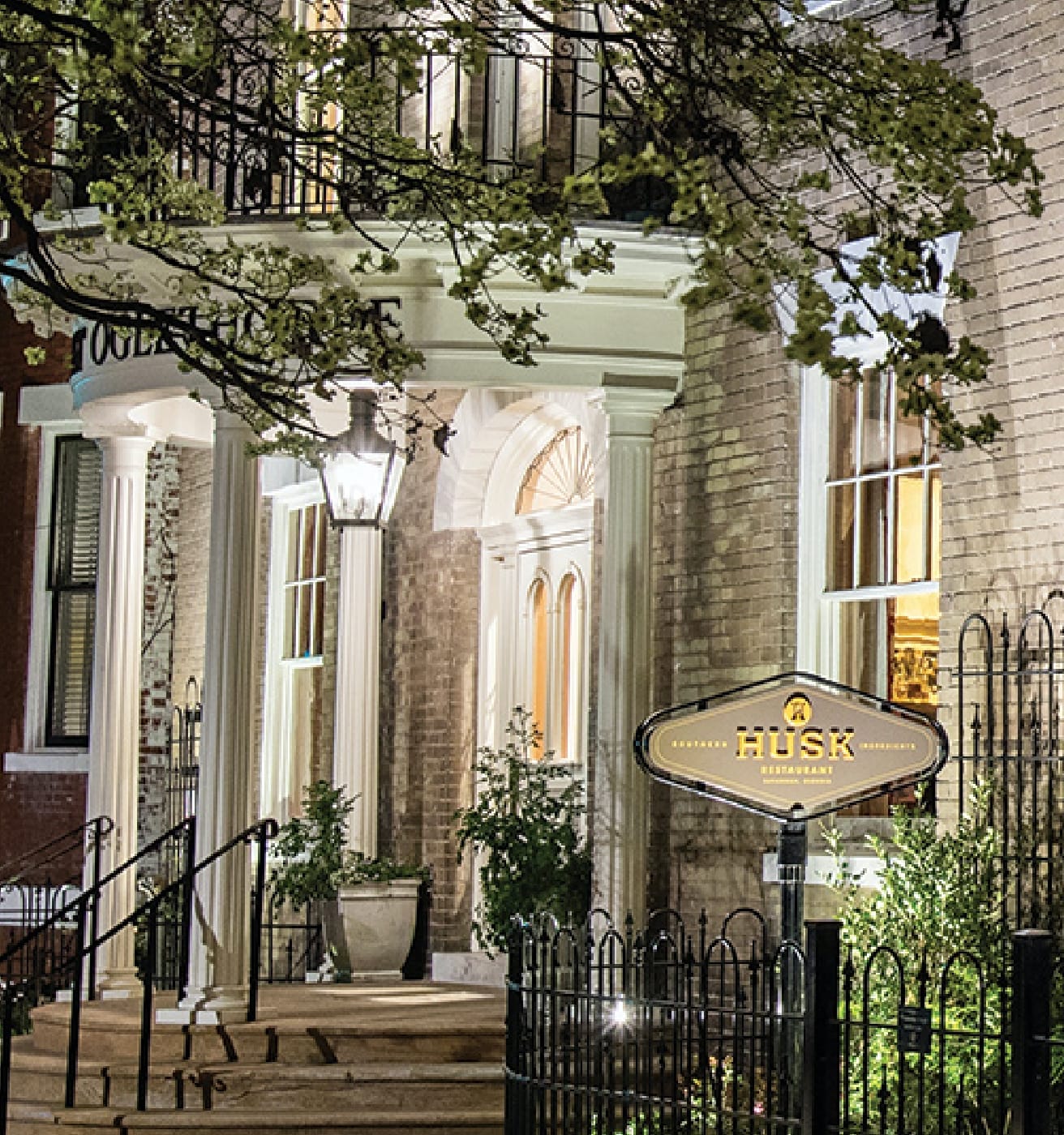 Book a dinner reservation at award-winning restaurants like Mashama Bailey’s The Grey, located in the city’s former Greyhound bus terminal, and Husk, an outpost of Sean Brock’s famous Charleston restaurant. For brunch, head to The Collins Quarter, which takes its inspiration from Australian cafe culture.

Continuing along the coast we find…

From Savannah, drive south to Brunswick, the gateway to Georgia’s Golden Isles with a historic downtown home to a brewery and distillery. The Torras Causeway connects the mainland to St. Simon’s Island and to Sea Island beyond—with signs for sea turtle crossing. 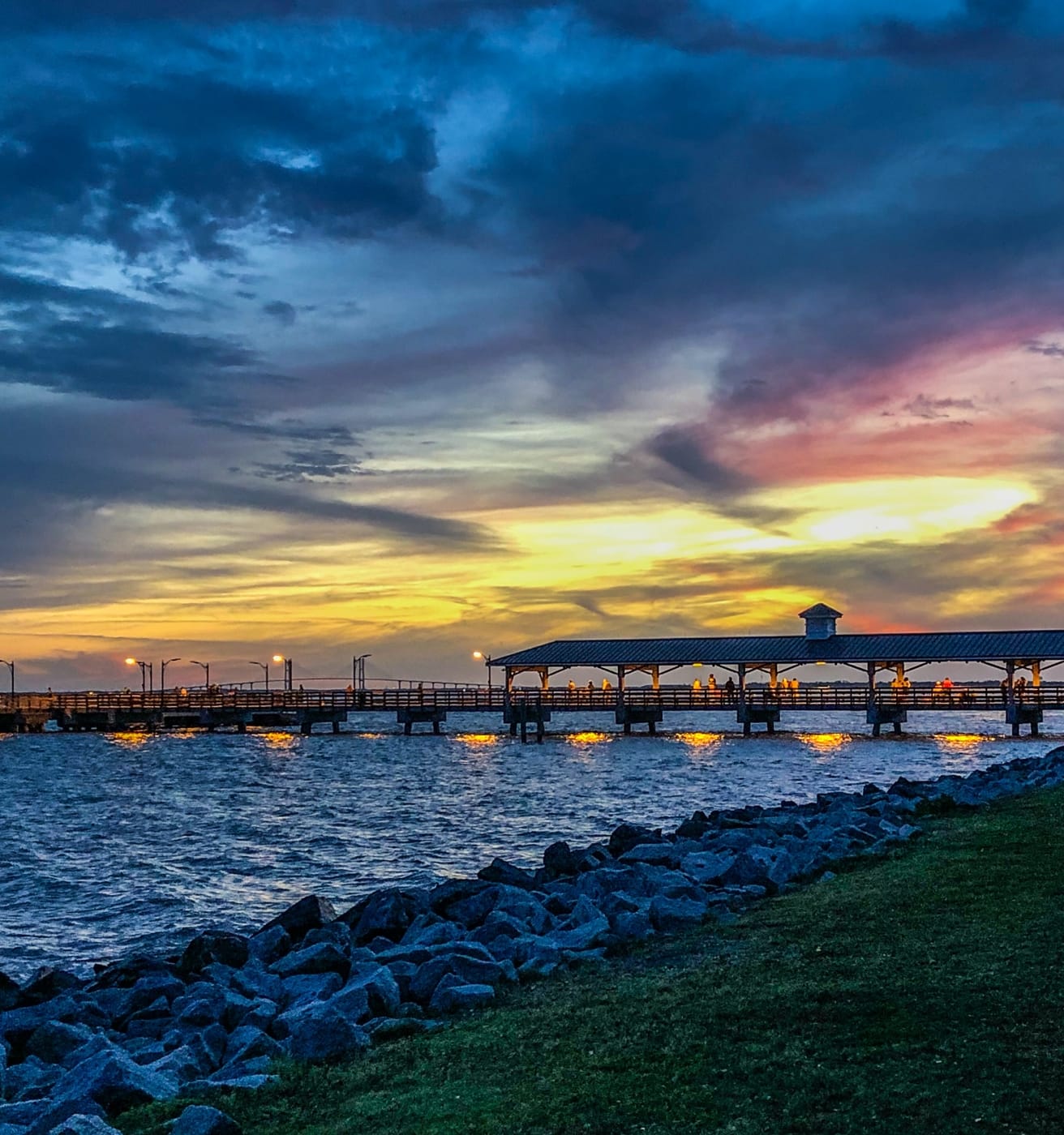 Visit Pier Village, named for the nearby fishing jetty extending into the ocean, for shopping on St. Simons Island. Its clothing boutiques, jewelry stores, book nooks, and childrens toy havens are right around the corner from a historic lighthouse. Of course, it wouldn’t be a trip to the ocean without some beach time, and Sea Island Beach and East Beach are two of the region’s best. Also of note is Fort Frederica National Monument, which was built by James Oglethorpe to defend pre-Revolutionary Georgia from Spanish raids.

Pool at The Cloister 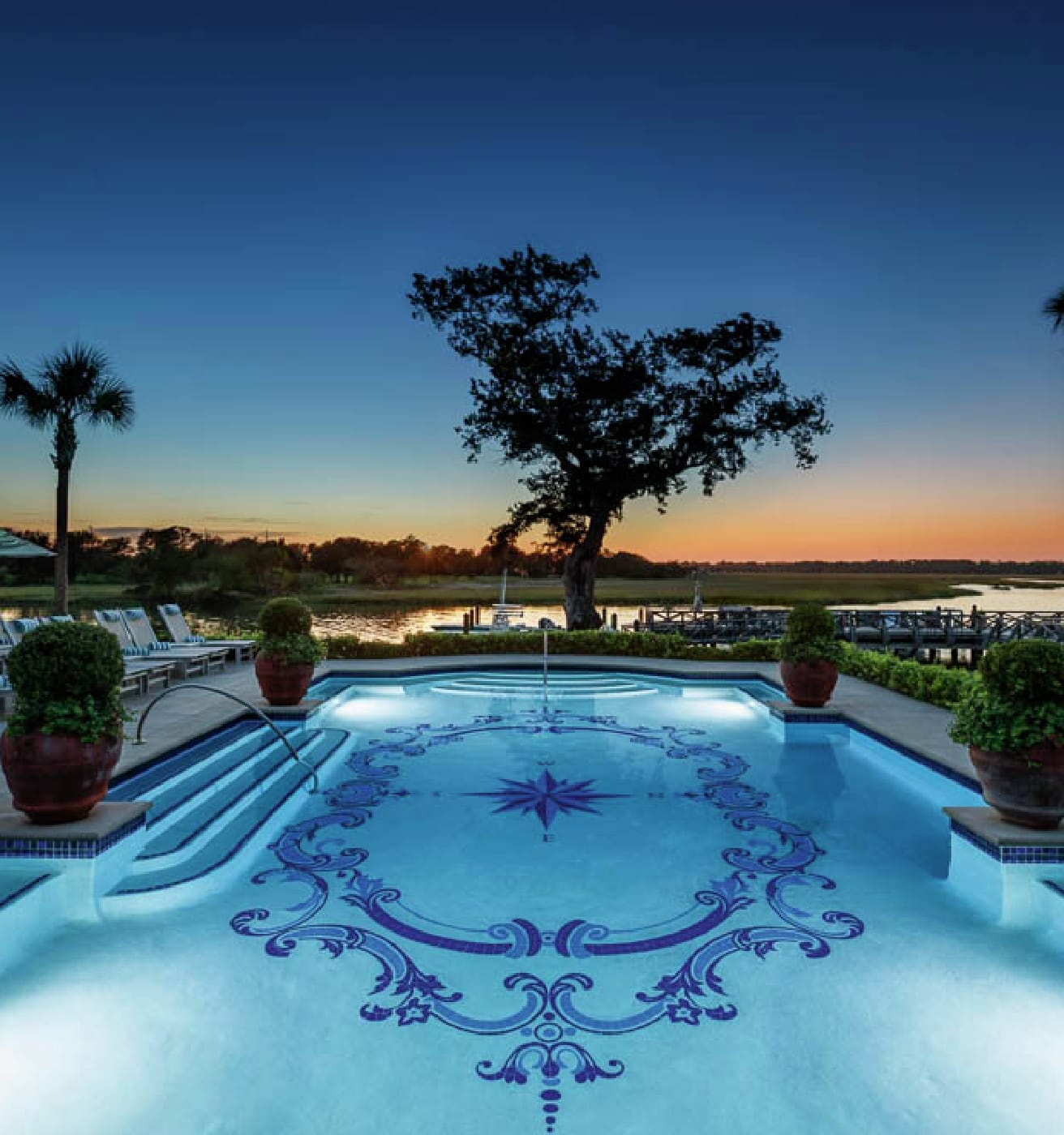 The storied Sea Island Resort has long been a haven for celebrities and politicians, and even previously hosted the 30th G8 Summit. A stay here could include rooms at The Cloister and the Inn at Sea Island. King and Prince Resort—originally established as a rival club on St. Simon’s Island—was one of the island’s first hotels, and features oceanfront rooms and a family-friendly pool area. 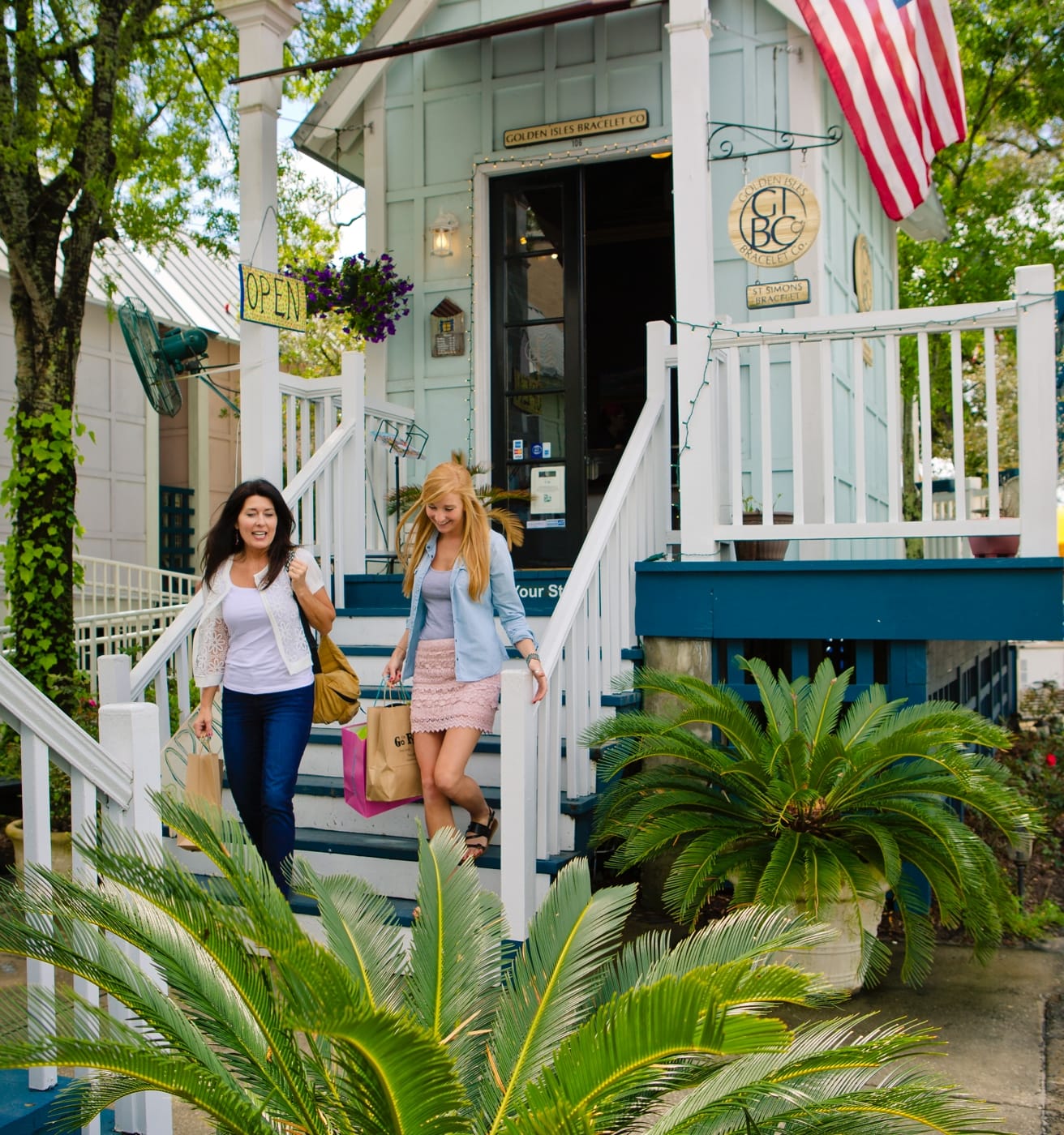 ECHO is the King and Prince’s oceanfront dining spot, named for the resort’s military history. St. Simon’s Island is also home to The Georgia Sea Grill, which combines locally sourced produce with seafood straight from the Atlantic.

And finally we come to…

Cross back over the causeway to Brunswick and head down to US-520—the only way to reach Jekyll Island, crossing marshes and the East River below. Jekyll, along with Brunswick, Little St. Simons Island, and St. Simons and Sea Islands, is part of Georgia’s Golden Isles. Visitors are greeted at the entry gate, where there is a required admission fee. 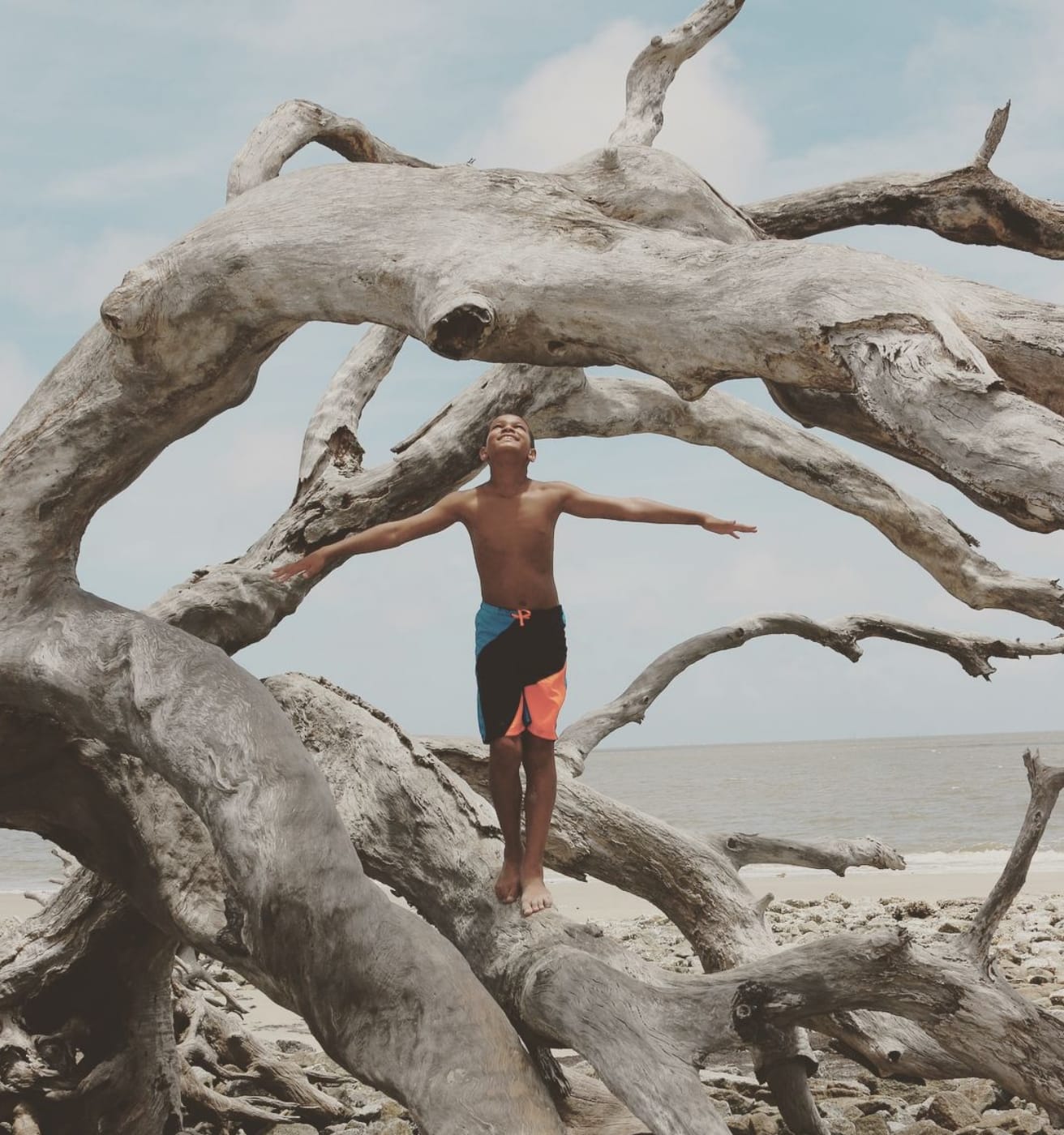 Make a beeline for Driftwood Beach, the most stunning landscape on Jekyll Island and a popular destination for photography. The eponymous gnarled, ancient trees dot the north shore of the island, resembling a forest without any leaves.

On the southern end of the island, the Wanderer Memory Trail uncovers the history of America’s last known slave ship. Mosaic, the Jekyll Island Museum chronicles the island’s past, including the island’s Native American history and the Gilded Age era. 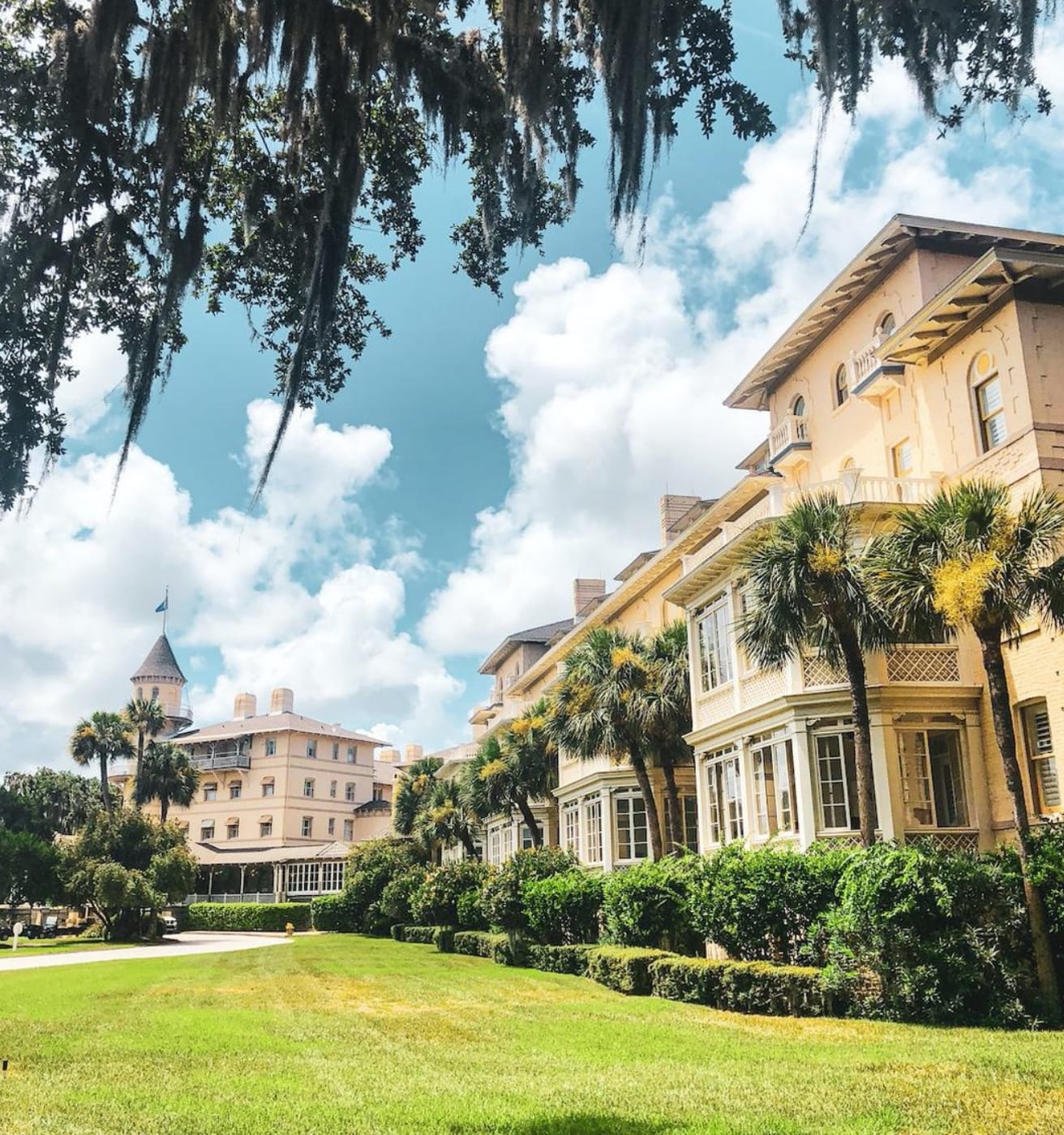 Once a playground for the Rockefellers, Vanderbilts, and Morgans, the Jekyll Island Club Resort has been preserved as a historic hotel. The Historic District tour visits the private cottages where the most notable guests spent their seasons. 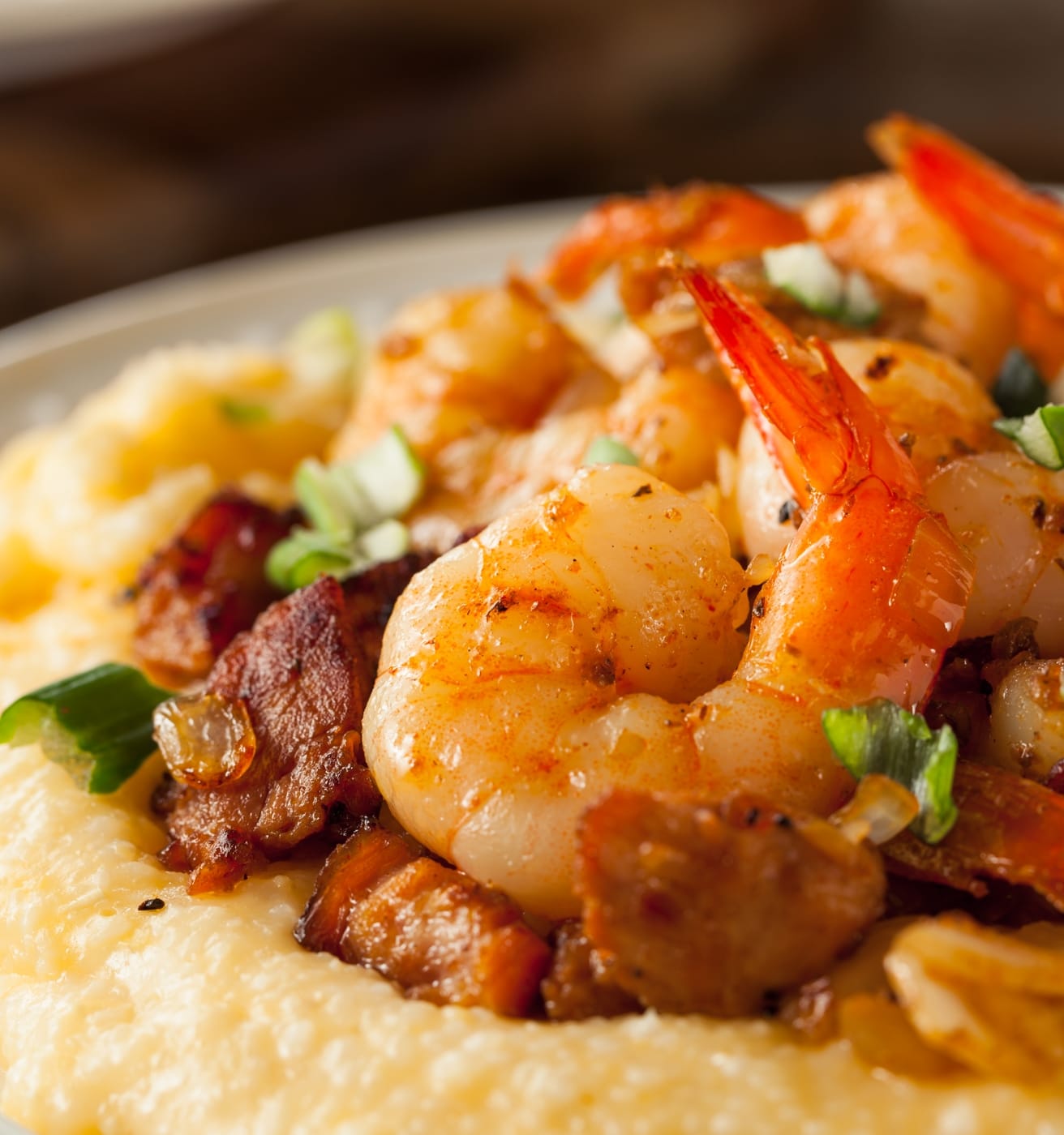 Enjoy waterfront dining at The Wharf, which has casual seafood offerings and award-winning shrimp and grits.

This Hotel in a Charming California Gold Rush Town Has an 1852 Saloon and a Moody Speakeasy
this link is to an external site that may or may not meet accessibility guidelines.