"When people only read the tour guides, they don't find Zurich fun," says chef Meta Hiltebrand. "But when you meet someone that lives here, you fall in love."

It's a sticky summer day in Switzerland's largest city, and I have made a beeline to Hiltebrand's corner of the fourth district (Kreis 4). The neighborhood isn't exactly a common inclusion on a tourist itinerary — in fact, up until ten years ago, a tourist probably wouldn't find themself here before dark at all. A working-class area between the boutiques of Bahnhofstrasse and the cobblestones of the Old Town, the fourth district hosts the majority of the city's nightlife, entertainment, and legal sex work — and, more recently, its culinary ascendancy.

I am here to experience the renowned tasting menu at Le Chef, a paragon of change in this oft-maligned part of Zurich. Five years ago, Hiltebrand opened Le Chef to stir up Zurich's once-underwhelming culinary scene. The violet-walled dining room, adorned with various disco balls and mustachioed portraits, complements the modern, inventive dishes on her rotating tasting menu, which changes every three weeks.

"I'm really not a typical Swiss," Hiltebrand tells me during a conversation over dinner. "I need to have color in my life." She wastes no time in mentioning her restaurant's location at the center of Zurich's red light district — in fact, it's a draw for her. "The city is different in the night," she adds. And night, of course, is when Kreis 4 comes alive.

There hasn't always been an audience in Zurich for a modern European restaurant like Le Chef. The night I visit, Hiltebrand's ever-changing tasting menu includes lamb neck on avocado mousse, sprinkled with acai dust, and octopus over saffron potatoes with wasabi fresh cheese. She pushes boundaries with presentation; dishes are served with eye-droppers of various sauces and serums, or arrive domed in pastry, requiring you to "break into" them. In contrast, it still isn't unusual for restaurants to rely solely on traditional dishes like Züri-Gschnätzlets or Wiener schnitzel.

Hiltebrand wanted to challenge the stagnation and cliché. The self-proclaimed "punk" was raised in Kreis 4's Langstrasse neighborhood, at the time a gritty street of red light entertainment. She knew this community, in particular, was always receptive to new ideas in a way other Zurich residents were not.

The area's creative revolution in the mid-2000s saw new projects that perforated the city's traditional culture, like the concept stores and social spaces at Im Viadukt market and Frau Gerolds Garten. Slowly, Kreis 4 evolved into a quarter of clubs and craft cocktails; for Hiltebrand, cuisine was Langstrasse's next frontier, so she decided this was where she would settle Le Chef.

I ask Hiltebrand to reflect on her fast-changing Kreis 4: "We don't love it that people say we're trendy or cool," she admits, noting the recent trend of gentrification. "But here, they have a lot of different stories about life. This is why I wanted to open in Langstrasse. I don't feel comfortable on the Bahnhofstrasse; I'm a party girl. I'm different." The area's creative energy has attracted many other eccentric projects in recent years, making it one of Zurich's most dynamic neighborhoods — a fact that Hiltebrand knows well.

I see the twinkle in her eye before she even asks: "What are you doing after this?" So, I spend the night tagging along with le chef herself, learning from one of Langstrasse's biggest champions about the district she helped revitalize.

Here is our shortlist of where to go in Zurich's most exciting neighborhood:

At lunch, Le Chef is a more traditional restaurant — serving up a set menu of Zurich specialties like geschmorter Kalbsrücken to cater to the locals. Hiltebrand will tell you she only does this to appease business clientele; the chef is really after customers seeking a culinary journey, and this mentality transforms the restaurant come dinner service. Her three-to-five course menus combine seemingly incongruous flavors, like white chocolate and salmon or carrot-flavored ice cream. Hiltebrand often plays host, greeting diners as they arrive; she also prefers to review allergies and dietary restrictions for each guest, so it's best to reserve ahead of time.

25hours brings its own culinary flair to the table with NENI, a modern Mediterranean restaurant turning out mezze and mixed grill from its fiery open kitchen. Hanging planters and woven baskets dangle from above, while floor-to-ceiling windows permit guests to witness the neighborhood come alive after dark, while the rest of Zurich closes up shop.

Hiltebrand brought me to this unassuming hole-in-the-wall, popular for craft cocktails and DJs spinning European techno. We put our faith in the bartender, who served up creative, summery drinks — vodka-strawberry purée garnished with basil and crushed hazelnuts, and a white and dark rum blend with coconut water, cocoa liqueur, and fresh coconut flakes — which we took to the sidewalk benches outside for a truly local drinking experience.

On Hiltebrand's recommendation, I also checked out Dante — a dusky bar decorated like a prohibition-era speakeasy with ornate chandeliers, bow-tied bartenders, and candlelit tables. Behind the bar, stocked with rows of artisanal gin, the resident mixologists experiment with flavorful drinks like the Ruby Collins: muddled raspberries, cardamom-infused gin, lemon juice, sugar, and spicy ginger ale.

"Josef is my place," says Hiltebrand. The look of the restaurant is simple, but its dishes — inspired by chef Marcelo Drovandi's travels around Mexico, Peru, and Vietnam — are anything but. Tapas include sauteed scallops with artichoke cream, fennel salad, capers, black olives, and jalapeno puree, and arguably the best ceviche I've had outside South America: thinly sliced with avocado and sweet potato. Dine outside at the buzzy patio, or if you're lucky, snag a seat near the semi-open kitchen to watch the chefs at work.

A favorite warm-weather hangout inside a former S-Bahn train station, Oberer Letten is now a bath house and riverside leisure center catering to Zurich's younger generations, with a diving platform, two beach volleyball courts, and a skatepark. It also has two bars, Panama Bar and Primitivo, for a post-volleyball pick-me-up. "It's really special," says Hiltebrand, "because Zurich likes to be so clean and proper — but this place is culturally open." 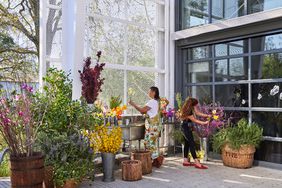