Visit these 11 cities for beautiful, fun, and thought-provoking public art, from murals to sculpture.

Cities around the world are adorned with public art, from traditional statues and abstract sculpture to murals and street art. You'll see it on buildings and walls, in parks, and in open spaces. Tours in both large and small cities focus on experiencing public art with self-guided walks and private excursions, and for many visitors, public art is the reason for selecting a destination.

Street art has become widespread around the world, encouraged with festivals and in many places, promoted by local governments. Part of the dynamic of street art is its evolving nature, and many travelers return to their favorite cities to find new murals, either added to or painted over existing work. Current events, social commentary, and political issues keep street art fresh and relevant.

Undoubtedly, the ease of sharing photos on social media has given public art more visibility in recent years. A study of art in cities around the world by money.co.uk based its results in part on a count of Instagram posts and street art searches. We've selected a few notable examples of cities with public art, but you may be surprised by a closer look at your own city before you venture out to explore one of these destinations.

Once a run-down neighborhood of warehouses, Miami's Wynwood is now an outdoor museum said to feature the highest concentration of street art in the country, with more than 200 murals spread over the 50-block district. Vivid artwork, the Museum of Graffiti, restaurants, craft breweries, and galleries attract locals and visitors, especially during the annual Miami Art Week and second Saturday Art Walks. Within the area, Wynwood Walls, an urban outdoor art gallery, features more than 35 murals by world-class artists.

Melbourne's Central Business District laneways are brimming with colorful murals, an open-air art gallery. A variety of streets and alleys are home to ever-changing artwork, and they can be explored on a self-guided two-hour walk. Hosier Lane is a classic area, and Collingwood has the distinction of famed artist Keith Haring's mural, created in 1984 when he visited Australia. The city of Melbourne supports street art's role in urban culture with a process for gaining permission for the artists.

In neighborhoods throughout Vancouver, including Stanley Park, Gastown, Strathcona, and Railtown, street art brightens the environment. Four self-guided tours, organized by location, make it easy for visitors to enjoy the murals in walking excursions of 30 to 60 minutes. Adding to the growth of the city's public art, the annual Vancouver Mural Festival brings in artists who focus on the festival's goals of diversity and inclusiveness. A mobile phone app has been created as a guide for visitors.

Given the title "City of Design" by UNESCO, Berlin is rich in street art throughout the city. One of the most beautiful and meaningful works of art is on the remains of the wall that divided the city for 28 years. Now officially a monument, the East Side Gallery displays the work of hundreds of international artists remembering the city's political history and celebrating freedom. Guided tours are available in a number of languages. A museum dedicated to urban art and a variety of art walks help visitors discover Berlin's wide-ranging public art.

Street art is everywhere in New York City, from tagging on subways to colorful murals. Each of the five boroughs offers outdoor public art from Staten Island's more than 30 murals along its north shore to Manhattan's Houston Bowery Wall. In Brooklyn, the Bushwick Collective hosts an annual block party to showcase its open-air gallery, attracting artists from around the world. The Audubon Mural Project, in the northern Manhattan neighborhoods of Harlem and Washington Heights, includes murals of birds threatened by climate change. In Astoria, Queens, the Welling Court Mural Project beautifies and inspires its community, and in the Bronx, many murals celebrate the hip-hop culture that originated in that borough of New York city.

Public art in Cape Town includes murals, statues, sculpture, plaques, memorials, and mosaic-covered benches. Supported by the International Public Art Festival, murals will be added to the more than 100 pieces of art, showcasing both local and international talent. Cape Town's public art covers conservation as well as freedom and social justice, from depictions of endangered animals to works honoring Nelson Mandela. The city publishes a catalog of public art and encourages its growth with guidelines for approval.

An abundance of public art in Paris makes "The City of Light" a great place to explore its murals, sculpture, and street art. Musée de la Sculpture en plein air is a free outdoor sculpture park, and the Musée Rodin offers several pieces by the famed artist in an outdoor setting. Street art includes the "I Love You Wall," Le mur des je t'aime, with the phrase painted in more than 250 languages. More than 20 murals decorate the area along the Canal De L'ourcq, and Saint-Denis Canal features Street Art Avenue. The city takes pride in its public art, creating a guide for locals and visitors. A variety of festivals highlight street art with tours and artist visits.

Street art decorates homes, restaurants, office buildings, and walls along the port city's winding, hilly cobblestone streets. Murals, the tallest covering the side of a 15-story building with a vivid depiction of "Spring Equinox," make the city an open-air museum, with the greatest concentration in the Bellavista neighborhood. Street art flourished when Chile returned to democracy after years of a military dictatorship, and the local government supports and promotes public art. Walking tours are widely available, making it easy for visitors to discover Valparaiso's art throughout the city.

Public art in Singapore includes sculpture from famous artists like Fernando Botero and Salvador Dalí as well as abstract works and the Merlion, the symbol of Singapore. The hybrid lion-fish figure represents the Lion City and its beginnings as a fishing village. Street art and murals began when the government commissioned 50 murals in 2015, and it has flourished since then in Chinatown, Little India, Haji Lane, and other neighborhoods. With approval from the Public Arts Trust, artists continue to add to Singapore's outdoor art. Self-guided walking tours take visitors past murals, depicting subjects from whimsical to cultural and historic.

Home to more than 40 public art installations including murals, sculpture, and brightly painted utility boxes, Hattiesburg is committed to making art available to all its citizens. Through the Hattiesburg Alliance for Public Art, the city has added whimsical, thought-provoking, and colorful art that touches topics like women's suffrage, sports, wildlife, civil rights, and the city's rock & roll heritage. The Public Art Trail map and brochure make it easy to enjoy the city's art.

Philadelphia's commitment to public art dates back to the Association for Public Arts, celebrating its 150th anniversary in 2022. Mural Arts Philadelphia, the nation's largest public art program, has contributed to the city's art for more than 35 years and local government supports the effort as well. Not surprisingly, the "City of Brotherly Love" is home to one of the largest collections in the country, with pieces like the widely photographed "Love" sculpture and Rocky statue outside the Philadelphia Museum of Art. Murals include "We the Youth" by famed pop artist Keith Haring and an untitled mural by artist Amy Sherald, known for painting the official portrait of Michelle Obama. 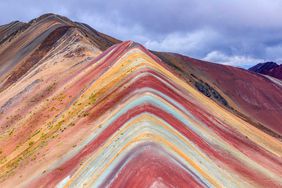 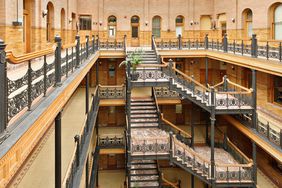 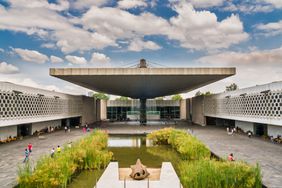 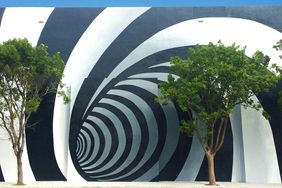