Basel is often overlooked for other Swiss cities, but this art capital has plenty of style. Here's how to make the most of your trip.

Adam H. Graham is an American food and travel journalist who has been based in Switzerland for over a decade. His work has appeared in The New York Times, BBC, The Wall Street Journal, Condé Nast Traveler, and more.

My Swiss husband, Ralph, and I play a game we call "That's so Basel." We live in Zurich, and when we encounter something that looks like it comes from Basel, where Ralph was born and raised, we call it out. It could be a free-spirited art gallerist in a striped shirt, or a Baseldeutsch expression from native Roger Federer, or a glassy hunk of asymmetrical architecture from Pritzker laureates Herzog & de Meuron (H&deM), whose works punctuate the skyline of Switzerland's third-largest city. There isn't a single look or style that defines Basel, but we know it when we see it.

Some visitors complain that Basel lacks old-world charm—that it isn't as pretty as Colmar and Strasbourg, across the French border in Alsace, with their fairy-tale half-timbered houses. But Basel has plenty of those as well—hiding at the top of steep riverbanks, lurking behind modern buildings by Renzo Piano and Richard Meier, and situated down quiet alleys. Basel just takes some unpacking.

The best way to understand Basel is to walk along the Rhine River, which divides the city into Grossbasel on the left bank and Kleinbasel on the right. Go north far enough, as I did recently, and you'll arrive at the city limits, which press up against the borders of France and Germany. While I ambled toward the point where the three countries meet, just north of downtown, I thought about how this location makes Basel-Stadt the least Alpine of Switzerland's 26 cantons. It's cut off from the rest of the country by the Jura Mountains, further adding to the city's unique identity.

In the past decade, an explosion of architecture has transformed Basel's skyline.

Another key piece of the city's identity is Art Basel, which, from its inception in 1970, has grown into one of the world's largest and most important art fairs, and continues to attract gallerists, collectors, and artists from around the world each June. The event is divided into sectors, which spotlight everything from site-specific installations by contemporary artists like Ai Weiwei, Tadashi Kawamata, and Marina Abramović to paintings by Picasso and Rembrandt. The Parcours sector, which occupies spaces, institutions, and parks across Old Town Grossbasel, has generated the most buzz in recent years. After canceling the 50th-anniversary edition for 2020 and postponing last year's event to September, Art Basel's organizers will return the fair to its traditional mid-June slot this year.

In the past decade, an explosion of architecture has transformed Basel's skyline. The headquarters of pharmaceuticals giant Novartis, located in the emerging neighborhood of St. Johann, is the epicenter of it all. The campus is home to more than a dozen buildings by Pritzker Prize–winning architects like Frank Gehry, Álvaro Siza, and Tadao Ando. The complex teems with scientists, scruffy artists, and bespectacled architects.

More Trip Ideas: Why Now is the Time to Visit the Swiss Village of Andermatt

At the headquarters of Roche, another pharma giant, H&deM's white, trapezoidal towers are visible from nearly every corner of the city. The first, 583 feet high, opened in 2015; the second, 90 feet taller and currently Switzerland's tallest building, will be finished this year. A third will surpass that by more than 50 feet when it's completed in 2023. These structures are a reminder of the wealth that comes from the pharmaceutical industry, but they also represent the arts patronage that wealth brings.

On this visit, I discovered H&deM's 2020 reinterpretation of the 19th-century Stadtcasino Basel, a concert hall located in Barfüsserplatz, the square named after the barefoot Franciscan monks whose monastery once stood there. Zaha Hadid originally won the bid to redesign it in 2004, but her bulky concept was rejected by the people of the city in a 2007 referendum. H&deM took over the refurb in 2012 and, eight years and $47 million later, their expansion of the facility was completed. I wandered around, marveling at the floating cloud mezzanine, trick mirrors, and precision parquetry. I had read that the red silk walls were Baroque, but they looked and felt more burlesque to me, and somehow fitted seamlessly with the wildly curvilinear staircases, an homage to the late Hadid.

I often tell friends that Switzerland's food is better the closer you get to the French border. Judged by this standard, Basel's culinary scene is arguably the best in Swiss-German-speaking Switzerland.

You can't experience Basel's architecture without simultaneously experiencing its art, but it can be hard to know where one ends and the other begins. I was drawn back to a few favorite places, like Werkraum Warteck, an early-20th-century brewery turned art space with a zigzagging staircase entrance. It's home to Liste, one of several satellite art fairs that coincide with Art Basel.

Around the corner from Barfüsserplatz, Swiss kinetic artist Jean Tinguely's Carnival Fountain is a masterpiece that squirts, gyrates, and vibrates, calling to mind some sort of mechanical accident. (After watching it for a few minutes, a tourist asked me whether it was broken.) Next to it is Richard Serra's Intersections sculpture, four curved steel plates that the press dubbed a "million-dollar toilet" after late-night clubbers started using it as a pissoir.

But I saved the best for last: Fondation Beyeler, set in the wealthy suburb of Riehen. The museum was designed by Renzo Piano in 1997 and is often cited by visitors and locals alike as Switzerland's best. I've been to several exhibitions at the Beyeler over the years, and they are often curated to interact with the museum's light and space and manicured outdoor gardens. Olafur Eliasson's recent installation, for instance, flooded the Beyeler's glass-roofed building with a pool of surreal green water.

If you want a real pool, plunge into the Naturbad Riehen, just next door, as I did. Designed by H&deM, the sustainable swimming Badi—a public outdoor pool—shuns chlorine in favor of a plant- and gravel-based filtration system. It's also an ideal place to take a micro wellness break, as one does in Switzerland, and stop to appreciate your surroundings.

I often tell friends that Switzerland's food is better the closer you get to the French border. Judged by this standard, Basel's culinary scene is arguably the best in Swiss-German-speaking Switzerland. The restaurant scene is smaller and more old-fashioned, but bigger on flavor and cheaper than in most cities in the country.

Volkshaus (entrées $23–$48), a Kleinbasel brasserie and beer garden shaded by fig trees, exemplifies Basel's Franco-Teutonic duality. I'd dined there many times, but couldn't resist the urge to return. I grabbed a seat and summoned la voiture, a rolling cart on which pink roast beef is carved tableside and then served with buttery, tarragon-flecked béarnaise sauce. The next night I tried the red-light district's Roter Bären (prix fixe from $80), where more modern dishes, like pea soup with crab and pistachio-rhubarb panna cotta, proved to be just as delicious.

I especially appreciate Basel's penchant for casual dining, which can be hard to find elsewhere in this formal country. Unternehmen Mitte, a bank turned indie-spirited café, doubled as a white-asparagus pop-up market during my visit, which fell during asparagus season. The Bauhaus-era Basel Markthalle was restored to its original use in 2014 and contains bakeries, cheese- and fishmongers, sellers of Tibetan dumplings, even a vending machine stocked with honey and pollen.

For more haute fare, hop on a Rhine-powered cable ferry to the riverside terrace of the Michelin-starred Roots (prix fixe from $150). Ralph and I once splurged on a seven-course meal there with my brother-in-law Florian, a pilot for Novartis, and his wife, Anna, an art consultant. We washed down morels and pike bathed in various sauces with a few bottles of Weissburgunder from a winery in nearby Riehen. Eventually, we began comparing Basel with its biggest rival, Zurich. "What's the best thing about Zurich?" Florian asked. "The train back to Basel," he said with a laugh. "No!" Ralph chimed. "It's the express train back to Basel."

Basel has long been notorious for lacking midrange hotels, but the past couple of years have seen a boomlet of new arrivals. I was keen to check in to the Volkshaus (doubles from $247), a 45-room property that opened at the end of 2020. My window looked out onto the tree canopy of its hushed beer garden, while my room, designed by—who else?—H&deM, included forest-green shower tiles, padded bathroom doors, and custom blond-wood beds and stools.

Art House Basel (doubles from $270), a member of Design Hotels that opened in the Steinenvorstadt nightlife district in 2020, is another score for the city. The buzzy lobby lounge made me appreciate my quiet and spacious room, with its sliding Japanese screens, Hästens bed, and terrace large enough for morning yoga or rosé nightcaps. Other newcomers include the Nomad (doubles from $240), a cantilevered concrete 1950s apartment building converted to a hotel, and the Silo (doubles from $100), a 20-room boutique hostel occupying a former grain warehouse in the outlying Erlenmatt Ost neighborhood. It's a short bike ride from the heart of the city, but the killer fried-chicken sandwich and coconut watermelon soup served in the courtyard café make it worth the trip.

Geneva and Zurich may be saturated with five-star hotels, but Basel has just one. Les Trois Rois (doubles from $650) occupies a Belle Époque building on the banks of the Rhine. Its Napoleon Suite is awash in Rococo whimsy, with period velvet furniture, wedding-cake plaster ceilings, and scenic wallpaper from the workshop of Zuber & Cie, in neighboring Alsace. Its Michelin three-starred restaurant, Cheval Blanc by Peter Knogl (tasting menus from $262), is tastefully swathed in lavender and gold. If it all sounds a little stuffy, consider that the hotel invited local students to graffiti its Bentley limousine to promote the value of self-expression through street art.

As much as I love exploring the city's fringes, the Rhine always pulls me back to its banks. One morning, I went for a ride on a Weidling, a traditional gondola-like boat. My rower, a German-born carpenter named Urs Arlt, told me that he had built his vessel by hand. Like many Swiss waterways, he explained, the Rhine was heavily polluted in the 1960s. "Today it's our source of drinking water, but it took a chemical spill in 1986 for it to become clean," he said. "How do you know they really cleaned it?" I asked, suspicious of big industries with pollution issues. "The pharmaceutical CEOs live in Basel, too," he said. "Their kids also need to drink this water."

Arlt's words in mind, I decided to get to know the river more intimately. From a sandy bank just below the massive Museum Tinguely, I plunged in and let the current carry me more than a mile downstream. I drifted past Basel's stack of half-timbered houses, medieval churches, and modern office buildings, while a Rotterdam-bound barge floated alongside me. And I thought to myself, That's so Basel.

A version of this story first appeared in the March 2022 issue of Travel + Leisure under the headline Basel, For the Future. 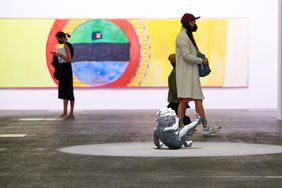