Star Wars fans have waited over 40 years to do their best Han Solo imitation by thrusting the Millennium Falcon into hyperdrive – and now, at Disneyland, they finally can.

The Millennium Falcon itself — or, rather, the identical facsimile standing center within the now-open Star Wars: Galaxy’s Edge theme park land — is the real deal. From first gaze upon its hull to finding a seat at its Holochess table, the fastest hunk of junk in the galaxy is in full splendor and better detail here than you’ll spot in any Star Wars trilogy. At 110 feet long, every detail, mechanical port and maintenance panel of the Falcon is in the right place — and once you step inside its cockpit, every click of a button and weighted switch feel real.

Millennium Falcon: Smugglers Run is a wild arcade game of a ride that requires more aptitude than expected. It’s transcendent in concept, and any Star Wars obsessives who have waited their lives for this moment will find that dream fulfilled. But once it begins, it’s a full-scale simulator manned by actual people, and it's more complicated than at first glance.

Enter the mechanical space port and you won’t see Han Solo or Lando Calrissian but Hondo Ohnaka, a shifty pirate who borrowed the ship from Chewbacca and needs your help gathering questionable cargo. From there, it’s on: Passengers are grouped in parties of six and assigned on-board tasks before stepping inside the Falcon’s paneled hallway and guest quarters. (Disney re-imagined its queue design to treat this portion as a waiting room, allowing passengers to roam freely and grab selfies at the Dejarik table.)

This is the first hint that this is not, by any means, a standard Disney ride. Millennium Falcon: Smugglers Run hits somewhere between Epcot’s Mission: Space and a late-night taxi ride for a turbulent adventure that’s in its drivers’ control, for better or worse. Of the on-board positions, it’s the pilots who have dominance over the experience; gunners, who can shoot lasers on manual or automatic mode, offer some assistance as engineers playfully push buttons and toss an occasional harpoon while watching along from the back.

Smugglers Run requires gaming know-how for those in the front position, who push upwards to fly downwards and vice versa — a maneuver proving tricky for some in the Star Wars attraction’s first days. Still, flown competently or not, the ride handles beautifully. When pilots dive, it really dives; swerve right and everyone will feel and see it happen in the moment, even if parameters are in place to guarantee riders don’t completely crash the Falcon. Pilots are in charge, full stop, and we learn as they learn, soaring and plunging along the way. (Perhaps that’s why no Disney ride has ever made me nauseous but this one.)

Pulling the lever to throw the Millennium Falcon into hyperdrive is a brilliant experience for the front row, but Disney’s newest ride indelibly provides less thrills for the other four riders, who are relegated to a supporting role. These four non-pilots may be tasked with helping net more points for the team, but seem to only nominally affect the outcome. On a standard attraction it wouldn’t matter much but here, when the much-touted Play Disney Parks app logs your score and helps build a reputation that follows you around the land, it absolutely counts. Those galactic credits you earn (or owe, depending on how poorly your team performs on Hondo Ohnaka’s mission) actually mean something, and can be skewed by a stranger who didn’t want to trade positions. It’s worth noting, too, that Smugglers Run is the only Disneyland attraction that does not allow guests to request or wait for certain positions.

The ride’s plot and its ties to Solo: A Star Wars Story are difficult for non-fans to follow along with, especially without familiar faces popping in like on Star Tours. It’s not that they’ve thrown out the entire concept of letting us get close to Kylo Ren, Finn or BB-8 — they’re just elsewhere within the land.

Both Disneyland and Disney World are building a jaw-droppingly intense, unprecedentedly experiential Star Wars attraction that will change theme parks forever — but it’s not this one. Galaxy’s Edge opened earlier than anticipated, thus shelving Star Wars: Rise of the Resistance, which takes passengers on a journey through a full-scale Star Destroyer, until later this year on both coasts. As a supplement, Millennium Falcon: Smugglers Run serves what will likely be a brilliant one-two punch; standing as Star Wars land’s sole attraction, it could be received as lackluster by unfamiliar passengers, even as it thrills lifelong Star Wars fans elated to simply enter its nearly identical cockpit.

As a whole, Millennium Falcon: Smugglers Run hinges on teamwork, a tricky conceit when more often than not, each cockpit will contain a mix of different families flung together. This volatility both in group and performance makes the attraction play out like a video game in real time, as you cannot predict what will happen because you don’t know what the other players will do. Spontaneity can be good, and the fun, cinematic realism this ride brings to Disney parks is unparallelled, but it’s not without complication. Leaving one’s dream of flying the Falcon to chance and on-board success in a stranger’s hand may prove too contradictory while on a Disney vacation that requires such deliberate planning and execution that booking breakfast with Winnie the Pooh six months in advance is the norm. Most everything about the Millennium Falcon stuns, but even with its successes, that uneven division of labor can burn. 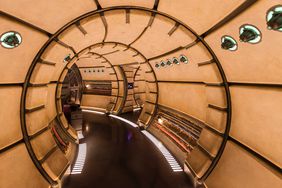 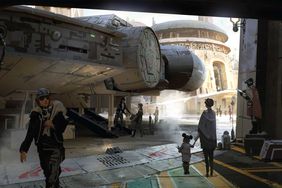 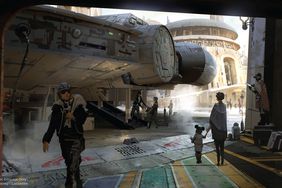 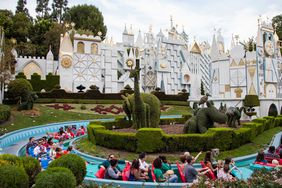 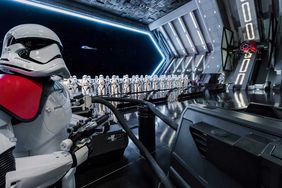