Oscars 2020 Travel Guide: Where to Go If You Love This Year’s Nominees

Awards season is upon us, and you know what that means: It’s that magical time of year when movie lovers can escape into the stories and destinations of the year’s best films.

This year, forgo the sticky floors and crusty theater seats and head to your favorite movies’ filming location for some serious movie immersion. Here are seven places to travel to based on your favorite films nominated for Oscars in 2020.

Quentin Tarantino’s “Once Upon A Time in Hollywood” romanticizes Los Angeles in the late 1960s. From the carefree “Summer of Love” to its abrupt, well, almost (I won’t spoil the fiery finale for you), Manson murders end.

So this year, head to Hollywood to get a feel for the modern-day movie biz. Stay at the Beverly Wilshire Hotel, where dozens of celebrities from Oscar-nominated Al Pacino to Farah Fawcett have stayed. It’s also been the filming location of several movies including “Pretty Woman.”

Dine at Casa Vega restaurant in booth #5, the same one where Leonardo DiCaprio and Brad Pitt pounded down margaritas and Mexican food. Or try Musso and Frank Grill, Hollywood’s oldest and most iconic restaurant to the stars. The film starts there with DiCaprio and Pitt meeting Pacino for a drink.

New York City is where the majority of this year’s Oscar contenders were filmed. From the gritty streets of the “Joker’s” Gotham to the neighborhoods in “The Irishman” and the theaters of Manhattan in “Marriage Story.”

One of the most talked-about scenes this year was when Joaquin Phoenix eerily dances down a set of steps. Since then, movie fans have made the trek to the Highbridge neighborhood of the Bronx to pose on “step-street,” as its known, off Shakespeare Avenue.

The movie’s most pivotal scene was shot in a subway station. Though they used the 9th Avenue station’s abandoned level, the crew also filmed at the Church Avenue and Bedford Park Boulevard stations off the D line. If you’re a real fan, stay at the appropriately named Gotham Hotel in Midtown or do as Bruce Wayne would, and stay at the ritzy Chatwal.

If “Joker” is a bit too dark for you, then the story of a devastating divorce may be more your style. “Marriage Story” is split between New York and Los Angeles, but the Knickerbocker Bar & Grill near NYU was featured several times during the film. For a place to stay, consider the Park Slope neighborhood of Brooklyn, where Scarlett Johansson and Adam Driver lived during the movie.

The setting for one of the years most talked about films, Seoul is the magnetic, pulsating city where they filmed “Parasite.”

Centered around two families, it tells the nuanced story of the low-income Kim family scamming the wealthy Park family. The majority of the film took place in a beautifully designed home built by director Bong Joon-Ho and his production designer Lee Ha-Jun.

Die-hard fans may recognize the Jahamun tunnel in the neighborhood of Buam-dong. It’s here the Kim family walks home from the Park house in the rain during that crucial scene.

While in Seoul, live like the Park family and stay at the Four Seasons Seoul in the center of the city. For a more traditional Korean experience, book a room inside the historic Rakkojae Seoul.

A star-studded female cast and director made the world of Louisa May Alcott’s “Little Women” come to life throughout the streets of Boston and nearby Concord. Take a stroll through the Arnold Arboretum, where Amy sees Laurie from the carriage in the Paris park.

If you’re #teamJo tour the Gibson House Museum, the set for Jo’s New York City boarding house. Or book a ticket for a production at the Emerson Colonial Theatre to feel like Jo did while watching a play.

While in Boston, stay at the historic Fairmont Copley Plaza Hotel, where Amy went to the fancy New Year’s Eve ball. If you’re up for a road trip, take a drive out to Gibbet Hill Farm in Groton, to stand in the spot where Laurie reveals his true feelings for Jo. On the way, stop in Waltham for a tour of the Lyman Estate grounds where Jo and Laurie dance on the porch.

Iconic Spanish filmmaker Pedro Almovadar’s latest film, “Pain and Glory,” is not far off from his own life. Antonio Banderas, nominated for Best Actor, plays Salvador, a filmmaker in constant physical pain facing the end of his career.

Salvador’s home in the film was modeled after Almovadar’s Madrid apartment. While you can’t tour the actual apartment, Spanish film lovers can visit the Estación de Algodor, a train station that appears in “Pain and Glory,” as well as many other Spanish films like “Julieta.”

Eat your weight in mozzarella and Jamón Ibérico at the Mercado San Miguel and burn off those calories walking down the ritzy Paseo Pintor Rosales, the street where Salvador lived. Then, celebrate cinema at arthouse Cine Doré from the film, a theatre that frequently plays Almovadar’s films.

Car fanatics rejoice. You can channel your inner Christian Bale in “Ford vs. Ferrari” and visit the city of Le Mans for the famous 24 Hours of Le Mans race. Although it wasn’t filmed in the city, the movie captures the energy of what a race there feels like. If you can’t make the event in June, you can visit the city’s museum dedicated to it.

But there’s more to this idyllic city than the race. Like many in France, the town has a fascinating history, including its stately town hall and Saint-Julien Cathedral, with extraordinary stained glass and architectural significance. Walk through the Cité Plantagenêt, picturesque streets lined with timber homes like something out of a fairytale. Stay in the historic area at a former mansion turned charming B&B, Maison Saint Pierre.

The blockbuster franchise, “Star Wars: The Rise of Skywalker,” is also nominated this year for Original Score, Sound Editing, and, of course, Visual Effects. One of the most visually stunning real-life locations in the film was shot deep in the desert dunes of Wadi Rum, Jordan.

This dramatic desert valley is Planet Pasaana in the film, where we see the Aki Aki natives and Rey in an exciting chase scene through the desert. Four hours south of the capital of Amman, it's only fitting that this Star Wars planet is also known as the “Valley of the Moon.”

Climb the dunes and marvel at the sandstone cliffs while touring by Jeep or camel. Be sure to stay overnight in a luxury desert camp reminiscent of an alien dome, like Wadi Rum Bubble Luxotel or the traditional Sun City Camp. 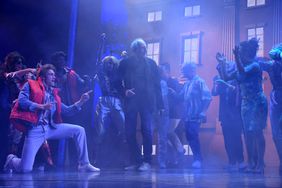 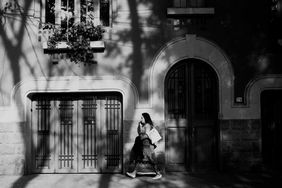