On a pilgrimage to Clarksdale, the cradle of the blues, Benjamin Nugent finds the town’s revival in full swing.

The first time I walked the streets of Clarksdale, Mississippi, I looked at the shotgun shacks and the slow, opaque waters of the Big Sunflower River and felt like a pilgrim in Mecca. If you love the blues and early rock 'n' roll the way I do, this is a holy place. It was in Clarksdale, in 1941, that the musicologist Alan Lomax tracked down Muddy Waters and recorded him singing and playing guitar. Several other great bluesmen, including Son House and John Lee Hooker, were born and raised in and around this Cotton Belt city of 15,000. One of the first songs House recorded was his "Clarksdale Moan":

Every day in the week, I goes to Midtown Drugs And get me a bottle of snuff, and a bottle of Alcorub.

It was in Clarksdale that Robert Johnson, according to legend, made a deal with the devil at the crossroads of Highways 49 and 61, trading his soul for mastery of the guitar. And if you were pressed to identify a single building as the birthplace of rock music, you could do worse than Clarksdale's Riverside Hotel (riversideclarksdale.com), currently closed and in need of donations for repairs. By some accounts, it was in its basement, in 1950, that Ike Turner and Jackie Brenston wrote and rehearsed "Rocket 88," generally considered the first rock 'n' roll song. In a previous life the hotel was the G. T. Thomas Afro-American Hospital, where Bessie Smith died in 1937.

These are the reasons that travelers from all over the world have stopped in Clarksdale for decades, often on road trips between Memphis and New Orleans. But Clarksdale is no longer a place to look around, breathe the sultry air the geniuses breathed, and drive on. In recent years, some scrappy entrepreneurs from out of town have helped to make it a great place to stay for a few nights.

The most significant development has been the opening of the Travelers Hotel (stayattravelers.com; doubles from $135), which occupies the shell of a 1920s flophouse of the same name that housed railroad workers. The story of the new Travelers began in 2014, when Chuck Rutledge, a renovator of historic properties and Clarksdale native, read a piece in the New York Times about 3B, a boutique hotel in Brooklyn operated by a collective of artists who worked at the property part-time and lived there for free. Rutledge thought a similar model might work in Clarksdale. So he and his partner, Ann Williams, recruited the New Orleans architect Jonathan Tate, won some grant money, moved to town, purchased the Travelers, and stripped the rooms down to their essentials: bare concrete, wired-glass windows, and high ceilings. They found a couple of young local artisans willing to work 25 hours a week in exchange for living quarters.

In 2019, they opened for business and quickly attracted clientele from as far away as Sweden and Australia.

The beauty of the Travelers' rooms lies in their austerity. All have handmade furniture and most have elegant desks built of plain wood; none have televisions. They make you want to read or write a book, rather than veg out and order room service, which you can't do, because there isn't any. If that sounds like an inconvenience, there is an unusual compensatory convenience: if you want to hear live music, on many evenings all you have to do is pull on some slippers and pad downstairs. The big lobby, with its vintage furniture and microbrews on tap, doubles as a free concert venue. I found a diverse, multigenerational crowd there: Black and white, guests and townsfolk, families and singles, who had gathered to chat, drink, and take in the show.

Sitting at the bar, listening to a mellow blues-inflected soul concert, I talked to Williams about the Collective Seed & Supply Co. (coahomacollective.org), the business she started with Rutledge in 2018. A general store that sells books, tchotchkes, produce, and garden supplies, it's also operated by artists who work part-time in exchange for accommodations above the shop. "We get fancy Delta ladies coming in with their yard men, and then a little old lady coming in asking how many mustard-green seeds she can get for thirty-seven cents," Williams told me. When I patronized the Collective Seed & Supply the next afternoon, I found that it sold both antibiotics for dogs and Lauren Oyler's millennial coming-of-age novel, "Fake Accounts."

Clarksdale is a place where people from different backgrounds and walks of life collaborate, according to Johnny Cass, an Australian guitarist who doubles as chef at Hooker Grocer & Eatery (hookergrocer.com; entrées $14–$36), where I ate an excellent fried catfish out on the patio. Cass first came to Clarksdale from Sydney because he was a blues fanatic; it was a local bluesman who taught him how to make soul food. "Me and Muleman were sitting around one night after we played a gig," Cass said, referring to the Clarksdale musician Mark "Muleman" Massey. "We were all drunk, and I was like, 'Who's going to show me how to make a biscuit?' He was like, 'Come on, Johnny, I'll show you how to make a biscuit.'"

For Rutledge, Clarksdale's newfound cosmopolitanism represents a hopeful change. "When I was growing up here," he said, "it was an idyllic Southern town, full of mom-and-pop shops, but it was segregated. Now the mom-and-pops are gone, the manufacturing is gone, but it's integrated."

As much as it might be in the midst of a transformation, Clarksdale retains its traditional musical and historical attractions. Abe's (abesbbq.com; entrées $7–$20) is one of the most renowned barbecue joints in Mississippi. The Delta Blues Museum (deltabluesmuseum.org) houses what remains of Muddy Waters's cabin from his sharecropping days. Clarksdale's venues — Ground Zero Blues Club (groundzerobluesclub.com), Red's Lounge (395 Sunflower Ave.; 662-627-3166), and Bad Apple (fb.com/badapplebluesclub) — are some of the best places in the world to hear live blues.

But the single best reason to visit Clarksdale, Cass says, is its Deep South hospitality. "You show up at a bar or restaurant here by yourself, and the next thing you know it's two in the morning and you're at a juke joint with people you just met," he said. "In a big city, it might take you a week to find the underbelly. In Clarksdale, you can get to the underbelly right away."

A version of this story first appeared in the July 2022 issue of Travel + Leisure under the headline Down In the Delta. 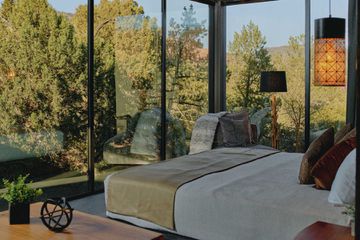