There Have Been Cowboys in Italy for Thousands of Years. You Can Go Riding With Them.

South of Florence, in the wild Maremma region that straddles Tuscany and Lazio, legendary horsemen called the butteri still work the land as they have for centuries. A growing number of agriturismi invite you to saddle up and join them as they go about their business.

At daybreak, the sun was already scorching as I coasted into the Tuscan village of Spergolaia on a rusty silver cruiser. I passed cream-colored stucco buildings, stables, and cattle chutes before arriving at a dirt lot where an athletic-looking Italian man in his thirties, dressed in a pristine tan gilet, a white shirt, and dark riding breeches, was bending over to put on a pair of leather boots. He looked quizzically at me and my bike. “Buongiorno,” he said.

“Buongiorno,” I replied, and asked if a horseback ride with the butteri was scheduled for that morning. He nodded.

As this would be my first time, I asked him how difficult it would be.

“Impegnativo,” he said. Challenging. I’ve been riding since I was a little girl, but I’m no pro. Still, there was no way I would be deterred from riding with Italy’s very own cowboys, which I’d been dying to do since learning about them when I lived in Rome, two decades ago.

The butteri are the cattle breeders and horsemen of the Maremma, a rugged coastal region that stretches across southern Tuscany and northern Lazio from the coast to the plains. Their way of life dates back to the spread of agriculture during Etruscan times. But beyond Italy, few are aware that among the celebrated vineyards, hotels, and restaurants that now dot the countryside between Florence and Rome, a vibrant cowboy culture has existed for thousands of years — and is today struggling to survive.

The man in the lot directed me across the road to the main stable of the Tenuta di Alberese, a state-owned, 10,000-acre ranch six miles from the Maremma coast. There I met Stefano Pavin, a 51-year-old buttero with golden hair and sun-bronzed skin who was placing military-style scafarda saddles on a row of Maremmano horses, a bay-colored breed indigenous to the region. Pavin wore a stylishly simple outfit — straw hat, olive-green cotton work shirt, khaki pants, dark brown riding boots —typical of the butteri, whose sartorial preferences have inspired fashion designers like Dolce & Gabbana. A pair of Italian visitors and I would spend the next four hours helping him and two other men check fences and move a herd of 15 foals from a hilly pasture to the salt flats on the other side of the ranch.

Because of the low wages and physical demands of their work, the butteri have been in steady decline, a trend accelerated by Italy’s economic downturn. Fewer than 50 are thought to remain in the Maremma. Most earn a living raising livestock, making wine, and producing organic grains, olive oil, and meats for Slow Food purveyors. Pavin is one of two full-time cowboys at the Tenuta di Alberese, where he cares for 70 horses and 450 cows. “Being a buttero is a way of life, not a fashion style,” he said as he rode beside me. “It’s not easy. There’s the extreme heat and the cold, and getting thrown on the ground and stomped on. The weak go away.”

There are about two dozen associations in Italy dedicated to preserving butteri culture. In spring and summer, several stage spettacoli, in which horsemen demonstrate their gallantry before a paying audience by performing elaborate dressage routines and cattle drives in traditional costume. Working farms have also adapted to modern times by embracing tourism. The Tenuta di Alberese now offers farm stays, some in historic buildings like the Villa Fattoria Granducale, built as a fortress by the Knights of Malta in the 15th century. For $65, the ranch also invites experienced riders to show up in Spergolaia on any workday at 7 a.m., as I had done, to accompany the butteri as they go about their morning chores.

We cantered across the fields, making sure the rough-hewn chestnut fences were still intact. We visited a watering hole for the horses, passing a herd of robust gray-and-white Maremmana longhorns, before continuing along rocky switchbacks, through a grove of olive trees and into a meadow where the reddish-brown foals were grazing. This terrain was inhospitable marsh, rife with malaria, until Mussolini drained it in the 1930s. Today, it is still fierce. “I wear a straw hat to protect myself from the sun and a long shirt to protect myself from the horseflies,” Pavin said. He swung his uncino, a hand-carved wooden stick with a hook on one end that he uses to open gates, herd cattle, and train horses.

There was a rumbling of hooves as the foals dashed up the hill. Pavin spun his horse around in pursuit, his uncino resting casually on his shoulder. I followed gleefully at a full gallop, crouched low in the saddle, holding the reins in one hand. After falling behind, I caught up with the group at the gate to Maremma Regional Park, a protected 25,000-acre nature reserve. Inside, we followed a meandering dirt path through Mediterranean pines, grassy meadows, and the occasional cow pasture— a landscape that felt untouched by time.

We posted speedily, passing the Tower of Collelungo, a crumbling 13th-century stone lookout. The path gave way to sand dunes, which we crossed to reach our final destination, the Spiaggia di Collelungo, a pristine gray-sand beach that was completely deserted. I followed the butteri into the emerald waters of the Tyrrhenian Sea. As the horses splashed in the shoals, we gazed at the islands of Giglio and Elba and the Monte Argentario Peninsula on the horizon. Even with all that’s changed for the modern butteri, the view was as breathtaking as it must have been for their ancestors when they roamed the Maremma so many centuries ago.

The Details: What to Do in Maremma, Italy

The closest airport to Maremma is in Rome, about 90 minutes from the southern border of the region. Those traveling to
the northern section can opt for airports in Florence and Pisa, both about a two-hour drive from northern Maremma.

Agriturismo Giuncola & Granaiolo The property has has turned its stables into bedrooms for a stylish farm-stay experience featuring excellent local cuisine, a swimming pool, and a large arena offering butteri events weekly. Grosseto; www.giuncola.it; doubles from $151 a night.

Agriturismo Il Gelsomino A modest, family-run farm with a pool and riding barn located within short biking distance of the butteri headquarters and Marina di Alberese beach. With its simple rooms and delicious Maremmano cooking, the property is great for budget travelers. Alberese; ilgelsomino.com; doubles from $56.

Tenuta Agricola dell’Uccellina This country estate in the heart of the Maremma Regional Park features suites and apartments, a restaurant showcasing the flavors and wines of Maremma, and exclusive beach access. Magliano in Toscana; tenuta​uccellina.it; doubles from $133.

Tenuta di Alberese Choose from rooms or apartments at the scenic Villa Fattoria Granducale, a recently renovated 15th-
century fortress originally built by the Knights of Malta. The property is just minutes from the starting place for the workday butteri rides. Alberese; alberese.com; doubles from $125.

For equestrians, essential butteri experiences include riding a Maremmano horse through Maremma Regional Park (ilgelsomino.com; $80 for a four-hour ride) and assisting the butteri at the Tenuta di Alberese with their daily chores (alberese.com; $67). Whether you’re a horse lover or not, be sure to experience the region’s exceptional beaches, hiking trails, and vineyards. 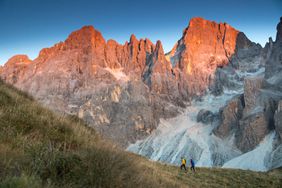 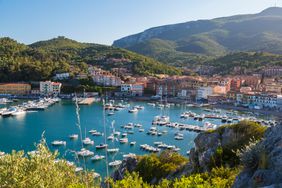