Despite winning the White House, Donald Trump has been speaking with his advisers about how much time he can spend in New York City during his term, according to The New York Times.

Located on Fifth Avenue in New York City and decorated with 24-karat gold and marble features in the style of Louis XIV, the Trump family's three-story penthouse includes a dedicated elevator to take Trump to his office on the 26th floor of Trump Tower.

Although Trump campaigned on the idea of making the country “great again” for working Americans, his big city digs are anything but average in a country where the median household income was $51,939 in 2014. The penthouse, valued at $100 million, is decked out with large chandeliers and plush furnishings, while gold trimmings line the space—from the ceilings and moldings to trays and glasses.

It costs New York City more than $1 million each day to protect the area around the building.

The property overlooks New York City’s Central Park, and art and portraits of the family line the walls.

“This is a very complex unit; building this unit, if you look at the columns and the carvings, this building, this unit was harder than building the building itself,” Trump told biographer, Michael D’Antonio, in a 2014 interview.

The late Angelo Donghia designed the penthouse; he was also the designer behind properties of other famous names like Diana Ross, Mary Tyler Moore, and Ralph Lauren.

According to The New York Times, Trump is considering splitting his time between the White House and New York City during his presidency.

Editor's note: This story has been updated. 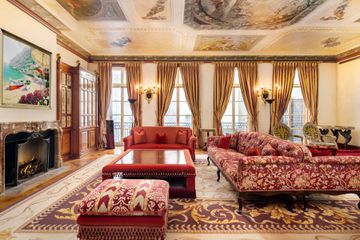