The coronavirus pandemic has New York City rethinking what public transportation will look like in the future. Ridership on the subways is down about 80 percent year over year, with more and more people choosing to walk or bike whenever they need to travel in order to remain socially distant from others. Because of this, the city is finally starting to take pedestrian safety more seriously and may one day soon build a bridge between Midtown Manhattan and Long Island City meant just for those traveling on two feet.

"For years we’ve been seeing a big increase in biking, in walking," transit consultant and former New York City traffic commissioner Samuel Schwartz told Time Out. "This is particularly true in the millennial generation. They enjoy incorporating physical activity into their commute. Really this made sense before COVID-19, it makes sense to move forward in the future."

To better serve this community, Schwartz and a group of engineers have proposed a new pedestrian and biker-only bridge named Queens Ribbon. As Time Out reported, the bridge would be just 20-feet-wide, but that’s okay as no cars would ever be allowed to drive on it.

"We already need additional capacity across the East River, we're already at capacity at the Brooklyn and Queens borough bridges, and soon, we’ll hit capacity at the Manhattan and Williamsburg bridges," Schwartz added about the importance of walkways like his. He further noted that other global cities like Paris and London have already incorporated pedestrian bridges into their designs and New York City "has lagged behind on this one."

The only drawback to the bridge, The New York Times reported, is its cost. As the paper noted, the bridge would not only require city and state approvals but also require a “hefty investment” of $100 million from the city, which is already facing a fiscal crisis. Still, as Schwartz explains, the bridge could prove its worth well into the future.

“COVID-19 has drawn tremendous attention to walking and biking as increasingly safe modes of transportation,” Schwartz said. “We know there will be future epidemics, superstorms, blackouts, and transit strikes.” But maybe next time, we’ll be more ready thanks to projects like this. 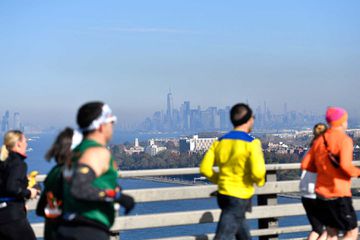