Post-Irma, one writer sets sail on a tour of this resilient archipelago with charter company The Moorings.

It was the first morning of my five-day trip aboard a catamaran cruising the British Virgin Islands. Just as I settled into the cockpit with a cup of coffee and a book, a double rainbow appeared above the lush hills of Cooper Island. Then a turtle surfaced with a splash several feet away, looking in my direction before submerging again. For the next hour, it played hide-and-seek with the boat, while pelicans dive-bombed for breakfast and returned to the rocks to eat their catch. A barracuda leaped out of the water off the stern. Eventually, I gave up trying to read.

I had returned to the islands — where I've vacationed for decades — eager to see how the area was rebounding. Only 14 months before my trip, Irma had whipped through the Caribbean, causing $3.6 billion in damage in the BVIs alone. While many resorts are still rebuilding, the sailing industry rebounded almost immediately, thanks in part to The Moorings, from which my husband and I chartered a 51-foot boat with a captain and a chef. The company offers approximately 200 yachts out of Tortola, the largest of the BVIs, for both bareboat and crewed trips, and is adding more to meet the demands of sailors, who have long revered the destination for its gentle trade winds, teeming sea life, and sheltered anchorages off private islands that, often, can only be approached by sea. And as anyone who takes to these seas will find, now is an ideal time to discover (or rediscover) this paradise.

On Virgin Gorda, the territory's third-largest island, one person benefiting from the rebuilding is Dale Wheatley, who holds forth at his barbecue restaurant, Hog Heaven Bar Grill. Bitter End Yacht Club and Saba Rock Resort, popular with yachters looking for anchorage, food, and entertainment, were destroyed by Irma, so for now boats tie up at sheltered Leverick Bay, a 10-minute taxi ride from Wheatley's place. Perched high on a hill, this smoky aerie serves up delectable ribs as well as sunset views out over Mosquito, Prickly Pear, and Necker islands. The restaurant, which had completed a $300,000 renovation only a week before Irma struck, reopened following several months of round-the-clock work and another $400,000 investment. "Irma had its good side and bad side," Wheatley told me, "and it depends on how you look at it. What is open is doing very well." In 2018, tourism on the island was mostly limited to yachters, but many popular stops, including Rosewood Little Dix Bay, will be open by the end of 2019.

The next day we traveled 15 nautical miles to Anegada, population 350, the only coral island in the archipelago. Protected by the 39-mile-long Horseshoe Reef, this white-beach-ringed, 15-square-mile island sustained relatively little damage and is finally getting the devotion it deserves. Residents told me that more first-time boaters are coming, and returning yachts are staying longer than they did pre-Irma — important for the island, since, with only three small hotels, its tourism economy is heavily dependent on seafaring visitors. Liston Potter, whose restaurant, Potter's by the Sea, is a disembarkation point for many sailors, had to rebuild parts of the property in time for the island's annual Lobster Festival, a two-day party that takes place each November. "I thought I was going to die I was so tired," he said somberly, "but it was worth it. It ended up being our biggest lobster fest ever, with a thousand people showing up. They were here, and they needed someplace to go."

When we arrived, rain had flooded the only road, closing the K-12 school of 70 students and the general store. As our taxi driver, Lauren Creque, searched for an open beachside bar, the only life forms we passed were the cows and goats that wander the island freely. (Five horses also roam, although their owner reclaims them daily at dusk.)

Anegada's few dining options are appealingly unpolished. Lauren pulled into the beachside Flash of Beauty Restaurant & Bar, where the only inhabitant was a dog sitting on a table. "The owner wonders why he isn't more successful," she said with a laugh. "But he'll close at one p.m., even on a good day." We had better luck down the beach at Cow Wreck Beach Bar, owned and run by Lauren's mother, Bell; her sister, Ann; and Ann's husband, Andrew. "It takes a certain kind of attitude to live here," admitted Andrew, who moved from Miami five years ago. "But it's so good for you. I used to go to sleep at midnight. Here, we're all in bed by eight p.m."

The family has expanded the business since the hurricane, erecting a gift shop. On the front wall hangs a photograph from the Obamas' 2017 visit — an event that made residents exceedingly proud. Ann has also built four charming guesthouses, painted in orange, turquoise, green, and blue, behind her mother's house.

Rum punches in hand, we strolled for a mile and a half on the deserted beach to the Anegada Beach Club, which consists of nine seaside villas, a 16-room hotel, and a restaurant. It was empty except for a lone guest fishing in the surf. Originally built for glamping, the resort lost its tents in the hurricane and has since rebuilt with more traditional palapas — which are now fully booked in the high season, despite the lack of air-conditioning — and it's now easier than ever to get to, even if you're not chartering your own boat, thanks to new daily ferry service from Tortola. Additional flights are anticipated in the near future.

We spent the night moored off Anegada before cruising to the privately owned Norman Island, grabbing drinks at Pirate's Bight Restaurant & Bar, the island's only dining establishment, before our final night on the boat. At dawn, we stopped for one last snorkel at the Indians, an archipelago of four rocky islets. We were alone, swimming in a snow globe of blue and green angelfish, French grunts, and yellow goatfish. I watched a spotted eagle ray glide along the reef below us and I thought of something our captain had said earlier: "No sailor ever looks at a resort from the water and says, "I wish I was there instead."" In this visual cacophony of underwater color, with the only noise my own breath, I was in total agreement.

A version of this story first appeared in the February 2019 issue of Travel + Leisure under the headline Paradise Rediscovered. The Moorings provided support for the reporting of this story. 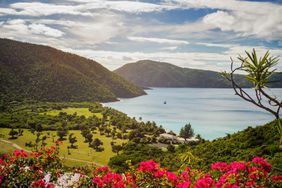 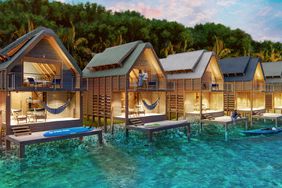 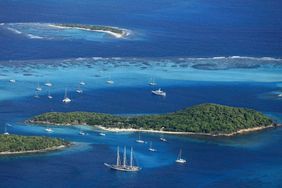 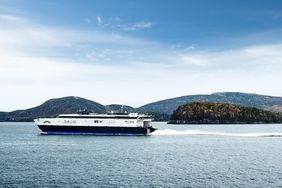