Just one year after beating its own record for the world’s largest cruise ship, the cruise line has cut metal on another, even bigger ship that should set another world record on its maiden voyage in 2021.

The cruise line is in the process of creating its fifth Oasis ship, the largest class of boat Royal Caribbean has on offer. The first Oasis ship, Oasis of the Seas, debuted in 2008 and, at the time, had the honorific of largest cruise ship in the world. It weighs 225,000 gross tons, stretches 1,184 feet long and is capable of carrying 6,296 passengers.

The 2021 ship is being constructed at the Chantiers de l’Atlantique shipyard in Saint-Nazaire, France. Very little is known about the ship, except that it will be bigger than anything Royal Caribbean has done before. In a statement, all the cruise line said is that the new ship “will combine the iconic seven-neighborhood concept that her sister ships feature with a bold and unexpected lineup of thrilling experiences, imaginative dining, unparalleled entertainment and the latest technology.”

The ship has yet to be named — but it will likely have the words “of the sea” included, if past trends are any indication. But Royal Caribbean won’t stop there. A sixth ship in the Oasis class is scheduled to make its debut in 2023. 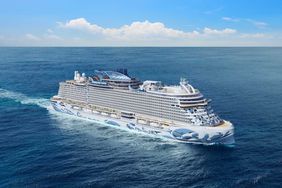