Eat Your Way Around the Mediterranean on This Culinary Cruise

Sailing along the coasts of Italy and France, you can dive into food traditions that have been defined by centuries of ocean travel.

Two days into a Mediterranean cruise last summer, I was sitting at La Persiana, a waterfront restaurant in the Tuscan port city of Livorno, watching the sun set over the sea and thinking about shipping routes.

A few crew members familiar with the area had suggested I come here for cacciucco, a typical Livornese stew. The stew, according to the Livornese, should have one type of seafood for every C. At La Persiana, that meant clams, mussels, monkfish, prawns, and octopus in a tomato base fragrant with saffron and cardamom — aromatic imports from historic trading partners to the east.

Livorno has been a crucial port city since the Roman era, and was claimed at various times by the great shipping kingdoms of Pisa, Genoa, and Florence. Looking out at the harbor — one that for centuries welcomed sailors and merchants from Greece, Turkey, Persia, and beyond — it dawned on me that much of our journey followed the same routes they had taken. You can see them on old maps, the little dotted lines that moved people and ingredients around the region — eventually forming the cuisine that exists here today. And what better way to experience this culinary network than to follow their trail on the sea from one place to another, from coastal Tuscany to Liguria, rugged northern Corsica to the dazzling Côte d’Azur?

This particular itinerary, aboard Oceania Cruises’ newly-renovated ship, Sirena, was curated by Claudine Pépin — the chef, cookbook author, and daughter of culinary star Jacques, who wanted to showcase the food and wine of the Mediterranean. As Italy curves into the south of France, hills sharpen into mountains; grassy farmland turns into silver-dusted olive groves, rocky coves, and whitewashed villages. The grapevines change from Sangiovese to Nebbiolo to Sciacarello to Tibouren. Just as the view from my stateroom window slowly morphed — from pine-covered hills to colorful towns atop sunbleached cliffs, fishing villages to yacht-filled marinas — so, too, did the food.

After embarking from Rome, we set sail up the coast toward Tuscany, and I decided to set the mood with dinner at Sirena’s Tuscan Steak restaurant. Before a perfect bistecca alla Fiorentina arrived, minimally dressed, I smeared whole-roasted heads of garlic onto crusty ciabatta and chose a Tuscan extra virgin from the roaming olive oil cart. The next day, I took a small group excursion to Tua Rita, a winery outside Suvereto, where I marveled at a Super Tuscan red called Perlato del Bosco — pearl of the forest. The surrounding Carrara region has been mined for its marble for over 2,000 years; the wine is supposedly influenced by the pearly dust found in the soil.

At our next port, 100 miles southwest in Calvi, Corsica, many of the same grapes appeared with their Corsican names: vermentinu (Vermentino), ugni blanc (Trebbiano), and niellucciu, a descendant of Sangiovese. (Ancient Greeks introduced viticulture to the island, which was later occupied by basically everyone, including Vandals, Arabs, and Byzantines; these grapes were likely introduced while it was under Tuscan control.) But the wines produced on this dry, scrubby island were wildly different from those in Tuscany.

Juxtapositions like this kept coming. In Calvi, I sat below limestone cliffs eating wild boar charcuterie on crisp crackers made with chickpea flour. Back in Italy the next day, this time in La Spezia, the charctuerie was a nutty coppa, and the chickpeas came in the form of farinata, the typical Ligurian pancake.

At a stop in Portofino, I took a water taxi a couple coves over to San Fruttuoso — a perfect pebble beach crowned by a 12th century Benedictine abbey — and ate smoky skewers of charred polipetti and trofie pasta with a Genoese pesto, rich with pine nuts. In Antibes, where we docked a few days later, I recognized pesto’s pine-nut-less cousin in the Provençal sauce called pistou. It came with a plate of crudite at a tiny cafe in town, where I slathered it on crunchy haricots verts. At a dinner on board that night, with a menu supervised by Claudine and sourced from the Antibes farmers market, the basil came in fragrant, whole leaves, served over ripe heirloom tomatoes with tuna and aioli.

People often think of cruises as a shortcut — a breeze through five or ten places over the course of a week, dipping your toe in each. But there can be romance in its slowness, the leisurely meander from point A to point B. It’s a rare opportunity to see the land change with every passing hour, like zooming in on the individual frames of a seamless moving picture. To follow the path of a spice, a grape, a cooking technique — to see the culinary reverberations of centuries of Mediterranean travel — is something worth savoring.

To book: oceaniacruises.com, ten-day Claudine Pépin sailings from $2,899 per person

A version of this story first appeared in the January 2020 issue of Travel + Leisure under the headline Savoring the Med. Oceania Cruises provided support for the reporting of this story. 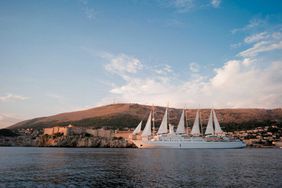