Travel + Leisure went behind the scenes with Walt Disney Imagineers to learn more about the spaces and experiences on board the Disney Wish.

When the Disney Wish sails its maiden voyage this summer, it will give new meaning to Disney Cruise Line's long-standing tradition of creating magical vacations at sea. Disney has already shared quite a few exciting details about the magic that awaits on board, and Travel + Leisure recently got a behind-the-scenes look from the Walt Disney Imagineers who are making this "wish" come true. Here's what we learned about the Disney Wish.

Disney began telling enchanting animated stories nearly 100 years ago. And since Disneyland's grand opening in 1955, they've been challenging themselves to find new and creative ways to take those classic stories from the big screen and bring them to life.

For the Disney Wish, Walt Disney Imagineers are doing just that in never-before-seen ways, while also keeping the ship's theme of enchantment front of mind. "Enchantment is about unlocking the wonder in everything we do and experience," Laura Cabo, portfolio creative executive at Walt Disney Imagineering, said in a press release.

This theme of enchantment means classic Disney stories like "Cinderella" and "Beauty and the Beast" – as well as newer additions to the Disney portfolio from Pixar, Marvel, and Star Wars – will be told on a more sophisticated level.

This extends from the Marvel and Frozen-themed dining experiences that blend upscale yet approachable menus with interactive storytelling, to the elegant, understated concierge staterooms and suites themed to "Moana," "Sleeping Beauty," and, "Tangled," and the magical moments you'll experience during the cruise that will make you feel like a character in your favorite Disney stories.

Imagineers Created an All-new Interactive Game for the Disney Wish

Speaking of becoming a part of the story, Disney revealed an immersive, interactive game called Disney Uncharted Adventure that will set you on a quest through the Disney universe, meeting beloved characters along the way.

Disney Uncharted Adventure utilizes the Play Disney Parks app (make sure you download it before your trip!) to turn your mobile device into a magical spyglass that you'll use at various locations around the ship to complete a series of missions.

Unlike many mobile games, you won't be looking at your phone the whole time you play. "While guests will need a mobile device to play, this isn't a traditional mobile gaming experience," said Davey Feder, software product manager at Walt Disney Imagineering. "This is a heads-up, active experience that can be played with family and friends. The magic will happen all around the ship. The spyglass is not where the adventure takes place — it's just the tool that brings the ship to life, opening portals into new worlds and allowing guests to interact with them."

As you visit each stop, you'll quickly discover the Disney Wish holds a hidden layer of magic that can bring the ship to life. Using your spyglass as a controller, digital menu boards and showtime displays transform into multidimensional digital games. Even pieces of art and chandeliers come to life with the magic your spyglass holds.

Without spoiling the whole story, your mission, should you choose to accept it, is to assist Captains Mickey and Minnie in finding pieces of the wishing star, which has been shattered and scattered across the sky by one of those slimy Disney villains. Each mission will take you to familiar Disney worlds like New Orleans from "The Princess and the Frog," Montunui from "Moana," and Neverland from "Peter Pan."

You can choose to complete all of the missions or just a few, and you can start and stop your quest anytime (like when that afternoon ice cream craving hits). Whether or not you find every piece of the wishing star, the entire ship will be invited to attend a live grand finale event with a climactic battle that (fingers crossed) ends with the wishing star being restored to its rightful place in the night sky, thus ensuring a "happily ever after" for the Disney universe.

Disney has already given fans a peek at the AquaMouse, but Imagineers let us in on a secret that adds another "splash" of fun to the water attraction. In addition to the "Scuba Scramble" storyline that was previously announced, Imagineers unveiled a second original story called "Swiss Meltdown."

Both stories are done in the style of the current "The Wonderful World of Mickey Mouse" animated shorts and are told mostly through a series of nine portholes along the conveyor belt that carries your raft to the top of the attraction before you come sliding down.

Where "Scuba Scramble" takes you on an undersea adventure, "Swiss Meltdown" finds you racing to the top of the Matterhorn for a sledding excursion before the sun melts all of the snow. Not only are the animations and music different, the lighting and water effects change, as well.

With the addition of a second storyline and the collection of Easter eggs the Imagineers pointed out (we'll give you one: keep an eye out for Chip 'n' Dale cooking up a plan to get to Castaway Cay in both shows), the AquaMouse has a major re-rideability factor.

It's also already been revealed that adults will have the opportunity to visit a galaxy far, far away at the Star Wars: Hyperspace Lounge, but Travel + Leisure got a closer look at the venue, including the "window" that will transport guests to various locales in the Star Wars universe.

In keeping with the ship's upscale theming, the Star Wars: Hyperspace Lounge has a high-end feel. With its high shine, gold details, sleek, custom-made furnishings, and the satisfying airlock "swoosh" you'll hear when the entry door opens, it's much more Canto Bight casino than Mos Eisley cantina. And if you've never heard of either of those, you don't have to be a Star Wars expert to sip on out-of-this-world libations as you peer out the 20-foot-wide window into space.

We were able to experience a few hyperspace jumps to well-known Star Wars planets and spotted a few familiar ships along with others the Imagineers had to point out to us (yes, we gasped when they mentioned the Star Tours speeder on Coruscant). If you're as excited about this as Reylo shippers were in the final act of "The Rise of Skywalker," Imagineers assured us the scenery will change every 7 to 10 minutes, ensuring you should see most, if not all, locations over the course of an evening.

Marvel fans lost their collective minds when Disney released a teaser video showing how the Pym-powered Quantum Cores on each table at the Worlds of Marvel "Avengers: Quantum Encounter" experience can cause a cupcake to shrink and grow with the push of a button. We got to see the tech in action — and it's just as much fun as it looks.

Your own personal Quantum Core does more than make teeny-tiny treats. You'll use it throughout the evening to assist Ant-Man and The Wasp when their Avengers technology showcase goes awry, thanks to an all-too-familiar Marvel villain. Ant-Man and the Wasp will enlist Captain America, Captain Marvel, and, of course, you, to save the day. Most of the action will play out via video screens and special effects, but, of course, Ant-Man and The Wasp will make an appearance, live and in person.

Danny Handke, senior creative director at Walt Disney Imagineering, said in a press release, "We're doing something that's never been done before in a restaurant, developing an exclusive Avengers adventure that will immerse our guests in the action through sophisticated technology and innovative storytelling. It's the perfect complement to the incredible menu of story-driven dining aboard the Disney Wish."

Don't worry about the hijinks interrupting your meal — most of the show takes place before and after dinner service. Film footage and explanatory Avengers tech graphics will play in the background while you dine on dishes inspired by some of the real and fictional locales seen in Marvel films.

The Oceaneer Club Is Meant for Kids, But We Want To Hang Out There, Too

Disney Cruise Line offers programming for kids of all ages, but the Disney Oceaneer Club for kids ages 3 to 12 is the spot that has us wishing we could rejoin the school-age set. Three unique spaces have already been announced, with two others to be revealed at a later date.

At Marvel Super Hero Academy, kids can train to become the next generation of Marvel heroes. They'll start by designing a Marvel-inspired super hero suit that will appear before their eyes on a mannequin. Then it's time for "Avengers: Mission Training," a gesture-based game where they can test their suit's powers. The activities do loosely tie-in with the "Avengers: Quantum Encounter" dining experience, so this is a great activity for kids to try out before they visit Worlds of Marvel.

Next door at Fairytale Hall, kids can participate in the favorite pastimes of popular Disney princesses. Choose from arts and crafts with Rapunzel, storytime with Belle, or play in the "virtual" snow with Anna and Elsa in a series of gesture based games.

Kids can also visit the Walt Disney Imagineering Lab and learn what it really takes to be an Imagineer by working through the entire creative process. We were most excited to learn more about the Ride Studio, where kids can design and build their own roller coaster based on elements of Big Thunder Mountain Railroad, Space Mountain, or the Matterhorn Bobsleds. When their creation is complete, they can take it for a virtual spin in a specially designed capsule that mimics a real on-ride experience.

The Disney Wish will set sail on its maiden voyage to Nassau, Bahamas and Disney's private island, Castaway Cay, on July 14, 2022, and reservations are available now for sailings through the end of 2022. 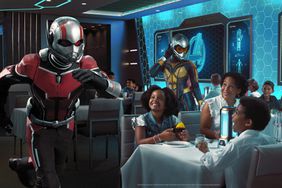 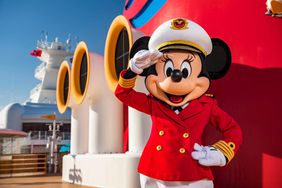 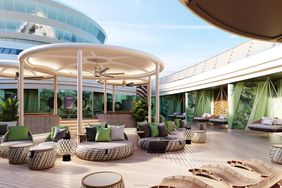 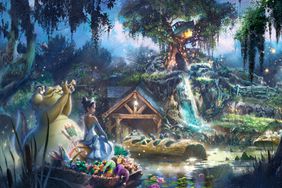 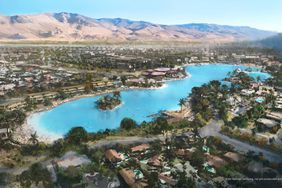