For many cruise ship passengers, there is no better way to spend a day at sea than sprawled on a lounge chair by the pool, cocktail in hand. Even when sailing through colder climates, guests gravitate toward pool areas, which has prompted many cruise lines to offer heated options and place swimming areas under retractable roofs. Since pools are the hubs of many cruise ships, it's no surprise that some of the best lines continue to amaze with their new offerings. Royal Caribbean offers surf simulators called FlowRiders on many of its ships, allowing guests to hang ten or boogie board at sea. MSC has carved a resort-like infinity pool into the sterns of both the MSCPreziosa and Divina, while Viking has installed their own sleek, glass-backed version on its new ocean vessels. Thanks to Princess, which pioneered the movies-under-the-stars trend, giant poolside screens are now commonplace on many large vessels. Also increasingly ubiquitous: multi-level waterslides, from the translucent Aqua Duck "water coaster" on the Disney Fantasy and Disney Dream to the four-waterslide Aqua Park on the new Norwegian Escape, home to the fastest slide at sea. Related: When to Cruise Where Even on river cruise ships, where pools are still a relative novelty, some lines are adding Instagram-worthy bells and whistles. The plunge pool on Sanctuary's Sun Boat III, which cruises the Nile, was designed to look like a desert oasis. Emerald Waterway's Europe-based ships feature swimming areas that can convert, Transformer-like, from a small pool into a mini-cinema. Many of AmaWaterways' European vessels have pools with swim-up bars. And on Uniworld's S.S. Catherine, you can find a pool inside a bar. Whether you're hoping for serenity in the Mediterranean Sea, a quick plunge on the Rhone, or adrenaline spikes in the Caribbean, these incredible cruise ship pools make a real splash.

It doesn’t get any wilder than surfing on a cruise ship. Found on Royal Caribbean’s Quantum Class, Freedom Class, and Voyager Class ships, FlowRider surf simulators have become one of the line’s signature activities. Surfing and boogie boarding is free, though you can lower your wipeout rate—and learn a few new tricks—by paying for some time with an instructor. A word of warning: With water rushing at you at up to 40 miles per hour and 30,000 gallons per minute, wardrobe malfunctions are almost a given, so make sure you swap that bikini for one-piece and tie those board shorts tight.

Not traveling with children? With the exception of the Celebrity Xpedition, each of the line’s ships has an adults-only (16 years and up) Solarium pool enclosed in a glass atrium. On Solstice class ships, there’s a small lap pool, while on Millennium class vessels, you’ll Zen out in a thalassotherapy pool. Also on deck: whirlpools, rows of cushy lounge chairs, and plenty of kid-free serenity.

This pool—with views of the ship’s iconic red flume—is the location for the Cunard flagship’s famous sail away parties. Perhaps the most epic of them all takes place as the ship sails out of Pier 12 at Brooklyn’s Cruise Terminal, with amazing views of the Statue of Liberty and the Manhattan skyline as the vessel glides under the Verrazano Bridge with just three meters to spare.

Cantilevered off the ship’s stern, the infinity pools on the Viking Star, Viking Sea, and Viking Sky (set to launch in 2017) are built against a window made entirely of glass, ensuring jaw-dropping views of the horizon whether you’re swimming with your head above or below the water.

Movies Under the Stars, Princess Cruises

Princess was the first line to introduce poolside movie screenings, rolling them out on the Caribbean Princess in 2004. These days, all of its ships, with the exception of the Pacific Princess, feature a 300-square-foot, 69,000-watt screen, and free popcorn, cookies and milk, and warm blankets on movie nights. A bonus for Royal and Regal Princess passengers: the main pool deck is also the setting for the Princess Watercolor Fantasy—a water-and-light-show with dancing fountains that shoot jets up to 33 feet in the air.

Inspired by its surroundings, the heated, oasis-style plunge pool on the Sun Boat III, which sails exclusively on Egypt’s Nile River, is framed by palms and papyrus and has all the colors and contours of the desert. Things get even sexier after dark: The staff can arrange a private dinner under the stars, next to a pool covered with floating candles.

The two pools on Norwegian’s newest ship are part of the largest water park at sea, which also includes two racing slides, a family slide, plus Freefall—the fastest waterslide on a cruise ship. Also in the mix: a kids’ water park, two movie screens, and four hot tubs.

Traveling the Saone and Rhone rivers, the S.S. Catherine may just be the only cruise ship around with a pool in a bar. Sitting behind glass walls in the ship’s jungle-themed Bar du Leopard, the soaking pool is backed by palms and a jungle mosaic and glows green at night, adding a cool, sultry vibe to the leopard-printed lounge.

There are enough Disney-fied touches on the pool deck to beguile any child—a family pool named after Donald Duck, a wading pool emblazoned with Mickey’s face, and a kids’ water slide held up by a giant cartoon mouse’s hand. But for adults, the real fun is in the people watching, particularly when those people are zipping above your head on the translucent Aqua Duck water coaster, a spectacle rendered even more dramatic at night when the ride is lit up, Space Mountain-style.

Any pool is a relative luxury on a river cruise, but AmaWaterways cranks up the wow factor with swim-up bars on many of its European vessels, including the brand-new AmaStella and AmaViola, and the upcoming AmaKristina (set to debut in 2017). Just picture yourself ordering a glass of Châteauneuf-du-Pape while perched on an underwater stool as the banks of the Rhone roll by.

These ships’ stern-side infinity pools are already mini oases, but sculptures that emit the sounds of nature—everything from birdcalls to waterfalls—add to the serenity. The pools are also an ideal spot to watch the sun sink into the sea, whether you do so from the pool itself or from the beach zone, an area of surrounding tiles submerged in a shallow layer of water.

Not only do Emerald’s Europe-based river ships have a heated pool with a retractable roof, but the pool bottoms can also be raised, allowing staff to transform the swimming area into a movie theater complete with bags of popcorn and comfy lounge chairs. 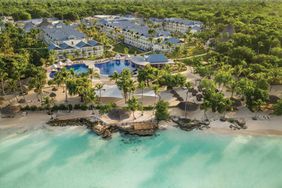