Rajiv Satyal is a Los Angeles-based comedian and host. His TV-clean act has made him one of the most versatile comedians working today. He began his career in his hometown of Cincinnati, Ohio. Rajiv had an unusual entry into standup, doing his act for then-world No. 1 tennis player Pete Sampras in a locker room. Rajiv has some interesting claims to fame: he opened for Indian Prime Minister Narendra Modi in front of 17,000 people. He made the massively viral "I am Indian" video, which has been seen over 50 million times, shared by Bollywood stars, and used to introduce the Indian Prime Minister in Shanghai and Dubai. He has opened for Russell Peters more than any other Indian comedian. He has opened multiple times for Tim Allen, Sebastian Maniscalco, Jo Koy, Kevin Nealon, and Dave Chappelle, and even opened Chappelle's very first show after his much-publicized African hiatus. One night in New York City, Rajiv closed the show at Gotham Comedy Club, following one of his heroes, Jerry Seinfeld. Rajiv performs weekly at the Laugh Factory in Hollywood. He has 14 videos with over 100,000 YouTube views each and has been featured on/in Amazon, NBC, NPR, Nickelodeon, Netflix, GQ, Bob & Tom, Times Now, Fx, Zee TV, Spotify, Pandora, The New York Times, The Wall Street Journal, Variety, Advertising Age, The Times of India, The Huffington Post, and The LA Times. Rajiv is the only person ever to perform standup comedy on all seven continents. He co-created the world-touring Make Chai Not War, a Hindu/Muslim stand-up show. The U.S. State Dept. sponsored it, sending it to seven cities in India. The show became part of the Congressional Record after being mentioned on Capitol Hill to Secretaries of State Hillary Clinton and John Kerry. This University of Cincinnati engineer and former P&G marketer has done stand-up at more than 100 colleges. He named his alma mater's online radio station "Bearcast," launched/managed a Miss India America's career, and has spoken to audiences from Fortune 500 companies to NFL players on innovation, diversity, and personal branding. His corporate clients include P&G (13 times), GE (8 times), Google, General Mills, Quaker, Toyota, Cisco, and more. He runs a consulting business called the Standpoint Agency, which helps marketers generate insights for their brands. He gave a TEDx Talk, "The Jester Is King." Rajiv has acted in national commercials and in TV shows. He has recorded 130 episodes of his podcast, The TanGent Show, and has interviewed everyone from Deepak Chopra to Seth Godin to Preity Zinta. In his spare time, Rajiv writes TV ads, performs improv, and produces sketches. His writings have made the front page of Medium and received hundreds of thousands of views on Quora. In 2018, Rajiv ran a Kickstarter, which was 100 percent funded in one day and exceeded 2x its goal ($56K total) in one month. The purpose was to launch his own talk show, What Do You Bring to The Table?, where guests include everyone from Hasan Minhaj (Rajiv's old roommate) to the first Indian Miss America to the first Indian U.S. Surgeon General. Rajiv has written and performed three 100-minute one-person shows, each one with a different theme. In 2019, the subject is politics, culminating in a performance at the U.S. House of Representatives. In 2017, Taking a Stand, all about music, led him to become the first standup comic ever to perform at Spotify. And back in 2013, Rajiv wrote No Man's Land, a show about his dating life that sold out all performances from LA to NY to San Francisco to Cincinnati. This show actually led to Rajiv's marriage, which itself had a comedic arc: Rajiv proposed to his girlfriend while opening for Kevin Nealon, and at his wedding, Russell Peters finally opened for him. 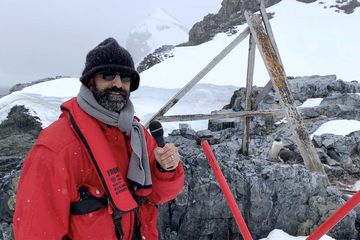