Anya Hoffman is a writer and editor with nearly two decades of editorial and content strategy experience. She began her career at The James Beard Foundation, where she started as a senior editor before becoming a managing editor and then a contributing editor. While there, Anya oversaw the national culinary arts organization's digital newsletter and wrote and edited articles for its print publications and website. After 11 years at The James Beard Foundation, Anya transitioned into a freelance career. For more than a decade, she contributed culture, travel, food, and lifestyle pieces to publications such as New York, Lucky Peach, Marie Claire, Salon, Fast Company, The Atlantic's CityLab, Parents, and Edible Queens, among other publications. She was also a contributing digital editor at Travel + Leisure, where she collaborated with the team on editorial tone and strategy for the magazine's newly relaunched website and oversaw and managed special projects, such as the site's New York City Destination Guide. Anya later spent more than three years as the senior editor and deputy editor of Epicurious, where she shaped and adapted the editorial and e-commerce strategy for Condé Nast's flagship digital food brand and conceived and launched Small Plates, a new vertical aimed at millennial parents. She is currently the senior director of content strategy & programming at Audible, overseeing the Amazon brand's original content creation. * 15+ years of experience as a writer, editor, and content strategist * Won the 2017 IACP Cookbook Award for James Beard's "All-American Eats" (Rizzoli), which she wrote and edited * Contributed to "The Grilling Book: The Definitive Guide from Bon Appétit" (Andrews McMeel, 2013) * Received a bachelor's degree in Latin American studies from Wesleyan University * Received a master's degree in food studies from New York University 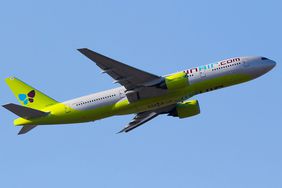 After Flying for 40 Minutes, Someone Noticed a Plane Door Was Open