You Can Go Sandboarding Down an Active Volcano in Nicaragua

Nicaragua’s rise to the top of your must-visit list is inevitable, with its colorful colonial towns, unspoiled beaches with world-class surfing, and pristine Lake Nicaragua, sprinkled with tiny islands.

With 19 active volcanoes in a chain running northwest to southeast, a visit to Central America's largest country must include a climb or two, along with a sandboarding adventure.

Thrill-seekers and adventurers head to Cerro Negro in the middle of the Maribios Volcano mountain range. This young but mighty black sand volcano is active, with 11 large eruptions in the 20th century.

Hang Out With Howler Monkeys at This Nicaragua Resort

The drive from Managua, a typical starting point, to Leòn is 75 kilometers (about 47 miles), a trip of about 90 minutes, traveled mostly on traffic-free highways. Upon reaching the outskirts of town, there is a sign to Lechecuagos, a small, rural community. Beyond the village, it takes another 20 minutes, bumping around on a rough, unpaved maze of roads with an occasional sign, to the visitors’ center of Cerro Negro.

Hike for an hour up the gravely, steep side of the north face on a naturally paved trail. Lesthersito, my guide, was kind enough to carry my board for the steeper portion of the climb. Secure any loose clothing for your arrival at the windy top at 2,400 feet. Once there, take in the stunning panoramic views of the chain of volcanoes in the central Cordillera de los Maribios mountain range while carefully making your way on the path around the rim of the crater. The volcano often emits smoke, though it hasn't erupted since 1999.

After you don a denim jumpsuit and goggles, push off and pray as you sandboard — at times at rather high speeds — on a piece of wood reminiscent of your favorite childhood sled. The ride down is a thrilling and rewarding few minutes after a challenging climb. Should you take a spill and enjoy a mouthful-of-lava-stone wipeout, as I did, rest assured, “It is normal,” as Lesthersito confided. The little black stones in your hair will wash out over the course of a few days.

Ready for more? San Cristobal Volcano, also known as El Viejo (the old one), is the country’s highest home to molten rock, and the symmetrically shaped Momotombo Volcano is nearby. These are non-technical climbs with varying degrees of fitness required, but none are for the faint of heart.

Nearby, colonial León, Nicaragua's former capital, is the country's second largest city. It offers historic Spanish monuments and sites, including the colonial baroque-neoclassic Cathedral Basilica of the Assumption of León, a UNESCO World Heritage Site, charming hotels, and the energy of a university town. Be sure to enjoy a celebratory lunch and a stroll before returning to Managua. 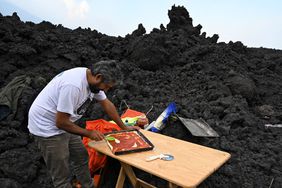