Every year from Maine to Alaska, throngs pour into U.S. national parks and preserves to climb towering cliffs, hike through misty forests and capture the perfect selfie at the grandest of canyons. Widespread appreciation for protected lands is a good thing, but national parks’ overwhelming popularity also has downsides. There are lines to scale Angel’s Landing in Zion every summer, and traffic jams just to ride the brakes through Yosemite Valley. During the National Park Service centennial in 2016, the system registered a record 331 million visits, and last year it nearly surpassed that mark, with the Great Smoky Mountains, the Grand Canyon, Joshua Tree, Zion and Acadia all hitting new highs.

This high desert park is a geologic oddity, five buttes surrounding a garden of gnarled sandstone spires that resembles Mars as much as the American West. Roam among the mushroom-shaped “goblins” 170 million years in the making, then spend the night in one Goblin Valley’s two yurts, framed by rocky cliffs for maximum scenic value. More info.

Fifteen miles beyond the California border, this 12-mile stretch of coastline is the stuff Pacific Northwest dreams are made of. Here, narrow trails snake past 300-year-old spruces, secret beaches reveal themselves at low tide, stubborn trees sprout from rugged sea stacks, and natural bridges are bashed by turquoise surf. Hike the Oregon Coast Trail during the day, but stay until dusk when golden hour casts the park in a particularly gorgeous glow. More info.

Hikers flock to northwest Kauai for the Kalalau Trail, a notoriously dangerous bucket-list trek that rewards the daring with views of mighty waterfalls and rippling emerald ridges that plunge into the ocean. Severe floods have temporarily closed the route, but you can still admire this brilliant stretch of coastline via boat, kayak or helicopter. More info.

The northern terminus of the Appalachian Trail is the summit of Mount Katahdin, a leg-searing 5,200-foot peak that’s also the centerpiece of this rugged state park. Baxter operates according to a “wilderness first, people second” philosophy, which means car access is limited, and to experience the area’s natural highlights — namely waterfalls, mountain vistas, pond-side campsites and the occasional moose — you’ll have to hoof it. More info.

Spanning 71,000 acres in the Black Hills, South Dakota’s first state park is a wildlife wonderland, where a herd of 1,300 buffalo roams the plains, and visitors spot pronghorn, elk and bighorn sheep. When you can pull your attention from the abundant animals, turn it to the equally impressive landscape, a natural playground of granite peaks and mountain lakes that draws climbers, hikers, campers and boaters for adventures soft and serious. More info.

Nine miles of white sand and calm waters await on this barrier island park off the coast of Fort Myers once used as a quarantine station for immigrant arrivals. Today, it’s a laid-back oasis accessible only by boat, where visitors romp in mellow surf, sea turtles lay eggs onshore and anyone lucky enough to snag an overnight booking enjoys dark night skies littered with stars. More info.

The Grand Canyon is the ultimate household name, but the nation’s second largest canyon? Not so much. Just south of Amarillo in the Texas Panhandle, Palo Duro stretches 120 miles long and 20 miles wide, its striated walls and hoodoos enshrining the earth’s history in stone. Explore the landscape on horseback or foot, catch a musical in the open-air amphitheater, then crash in a historic cabin on the canyon rim or its rocky floor. More info.

When Steven Spielberg needed a backdrop for “The Lost World: Jurassic Park,” he turned to this NorCal destination, where sandy beaches meet elk-mowed meadows and towering 300-foot coast redwoods — the tallest living thing on Earth. For a survey of the park’s charms, tackle the 13-mile James Irvine-Miners Ridge loop, which passes through ancient forest and the mystical Fern Canyon with 50-foot walls blanketed in lush, lacy growth. More info.

New York City has Central Park. Anchorage has Chugach State Park, a 495,000-acre backyard that is both undeniably wild and wildly accessible. Chugach spans nine different ecosystems and includes ancient glaciers, snow-capped peaks, turquoise lakes and beluga-filled bays. Choose your own adventure — from backcountry skiing to a coastal cruise — and be back in the city in time for happy hour. More info.

An hour north of the glittering Vegas Strip, this Mojave Desert park casts its own special light, reflected off Aztec sandstone that glows crimson at sunset. Meander into narrow slot canyons, past odd rock formations and a geologic wave, and keep an eye out for petroglyphs that date back 2,000 years and have a way of putting today in perspective. More info. 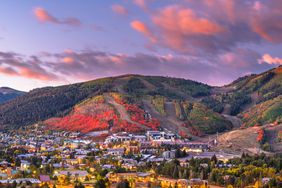