More than 40 venues are offering discounts, including the Guggenheim, New York Botanical Garden, and Carnegie Hall.

New York City is encouraging everyone to discover — or rediscover — its cultural institutions by offering deals on more than 40 attractions through the end of October, as part of its It's Time for Culture campaign.

The deals include some of the city's most iconic museums, performing arts venues, and landmarks, with the full list of deals available at nycgo.com/cultureoffers.

Art lovers can enjoy 20% off Garden Pass tickets to the final days of Kusama: Cosmic Nature at the New York Botanical Garden, as well as 25% off The Shed's new Drift: Fragile Future exhibit, and two-for-one admission at the Museum of Arts and Design (only through Oct. 17 to 23). Both the Solomon R. Guggenheim Museum and Museum of Moving Image are offering 25% off general admission.

Live performances are also part of the mix, including 25% off select concerts at Carnegie Hall, certain events at 92nd Street Y, and Blue Man Group, as well as 50% off select seats for the American Ballet Theatre's Pride Nights (Oct. 27 and 30).

Many theatrical shows are offering two-for-one tickets, including Manhattan Theatre Club's "Lackawanna Blues" on Broadway, as well as off-Broadway productions, like "Perfect Crime," Second Stage Theater's "Letters of Suresh," and "Stomp." Select orchestra seats for "The Play That Goes Wrong" are also 25% off.

Also being offered: buy-one-get-one-free admission to the Intrepid Sea, Air & Space Museum and Alice Austen House. The Cooper Hewitt is free through Nov. 29, thanks to support from its board of trustees (reservations are required).

Several venues' regular deals are also highlighted, including free admission for children 16 or under at the Museum for Modern Art, as well as free entry for children 18 and under and pay-what-you-wish Fridays at the Whitney Museum. Meanwhile, The Met and its Cloisters also follow a pay-what-you-wish admission model for New York state residents and tristate area students.

"The comeback of culture and performing arts in New York City marks a pivotal and celebratory moment in our recovery," NYC & Company's president and CEO Fred Dixon said in a statement. "We invite New Yorkers and visitors alike to explore and support the abundance of world-class arts and culture found across the vibrant neighborhoods of our city while also experiencing great value throughout the month of October." 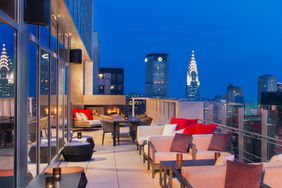