The exhibit opened in January 2022 at the Illinois Holocaust Museum and Education Center in Chicago.

For the first time ever, a museum is using virtual reality (VR) to bring Holocaust stories into the modern age, with the hopes that its history will never be forgotten.

Chicago's Illinois Holocaust Museum and Education Center debuted the world's first VR Holocaust memorial experience in 2022. With 360-degree sound and visuals, visitors to the museum will be guided around present-day preserved concentration camps by the people who survived them.

"The participant does not just see and hear the Holocaust Survivors' stories through a screen," Susan Abrams, former CEO of Illinois Holocaust Museum, said in a statement shared with Travel + Leisure. "Our VR technology transports the participants back to Holocaust sites today as they take a tour through one of the darkest chapters in history."

The experience includes two different VR films which have been recognized at film festivals like South by Southwest, the Nashville Film Festival, and the Vancouver International Film Festival.

Each of the two films is about 15 minutes long and follows a different Holocaust survivor. The first, "A Promise Kept," follows 13-year-old Fritzie Fritzshall as she "fulfills her promise to the 599 women who saved her life while imprisoned together." And "Don't Forget Me" follows George Brent's journey through the Auschwitz, Mauthausen, and Ebensee concentration camps.

According to the exhibit's online description, the museum is using the technology to "revolutionize the fields of Holocaust memory and education" in "ways that will engage audiences well into the future,"

The VR videos are just one of the ways that the museum is using new technology to preserve the stories of survivors. At the museum, visitors can also "talk" to Holocaust survivors through holograms.

The exhibit has a film showing every half hour from 11 a.m. to 4 p.m.". Advance reservations for the experience are required and available to book online. 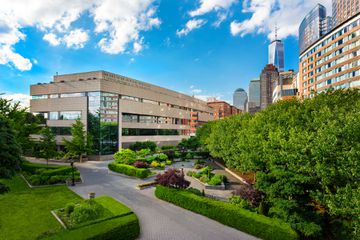