It's always party time at this abandoned village in Madeira.

It wasn't the best place to be with a fear of heights. One glimpse through the window confirmed that it was, in fact, an incredibly steep drop, but this was something I already knew. I had peered at the dollhouse-sized village below and the wild shores of the Atlantic Ocean that bordered it from the adjacent miradouro (viewpoint) before embarking. We dangled on the edge of a towering cliff, suspended more than 1,476 feet (450 meters) above the rugged coastline. As if that wasn't unnerving enough, this was happening within Portugal's steepest cable car.

I was on the idyllic island of Madeira, one of Portugal's hidden gems, packed to the brim with a smorgasbord of dramatic landscapes — mountains and cliffs, sea and forest. Armed with a rental car and the desire to venture off the beaten path, I found myself on the untamed northwest coast where I traded a five euro note for a ticket to challenge my fear of heights — a fair price to be transported to a place where time stands still.

Cable cars are a way of life in Madeira. There are currently seven on the island that vary in length, steepness, and purpose. Some, like the Funchal Cable Car in the heart of the city, carry visitors up to points of interest like the Monte Palace botanical gardens, and others were built to bring farmers to and from their crops that flourish in the fertile volcanic soil.

The notoriously steep Achadas da Cruz Cable Car ride transports local farmers and visitors down a 98% grade to the uninhabited agricultural village of Fajã da Quebrada Nova. At one point, the Teleférico das Achadas da Cruz was even the steepest in Europe. Dethroned by the Klein Matterhorn Aerial Tramway in Switzerland, this Madeiran cable car still has quite the reputation for its vertigo-inducing ride, and it's the one I chose to test my limits.

Historically known for producing Malmsey grapes, used in making the sweetest of the Madeira wine varieties, as well as other crops such as potatoes and fruit, this isolated village is a protected area and portal to agricultural life on Madeira back in the day. Up until 2004, the only way to reach the small settlement was by boat or an arduous, 2.8-mile footpath that took two hours one way — not ideal when carrying a load of crops.

The permanent residents aren't inhabitants of Fajã da Quebrada Nova at all really, rather landowners who live "upstairs" in Achadas da Cruz because of its accessibility to the rest of Madeira. Today, locals come down to their off-grid farm dwellings to tend to their gardens, make wine in the vineyards, go fishing, or simply escape and unwind in this little unspoiled paradise.

Except for one abrupt stop and a generous sway on the cable car, we made it safely to the bottom in a handful of minutes. I craned my neck for a view of our starting point at the top of impossibly tall cliffs. But none of the harrowing heights stuff mattered anymore; I was too busy feasting my eyes on an entirely different world from the one I had just left up top. Savage waves were the soundtrack, crashing ashore on the pebbly black-sand beach. Verdant cliffs pulled double duty, catering to the acoustics and the swoon-worthy scenery. It was an all-encompassing beauty; every photo was a good one. I felt torn in 75 different directions; the urge to explore was raging. Atlantic mist sprayed my face and I followed the paved path south toward the ghost village of tiny coastal dwellings sandwiched by rock walls and the wild ocean.

I explored the walkways, some meandering along the levadas (irrigation canals), skirting swaths of farmland and old stone huts. I was in a charm-induced trance — that is, until a hand-painted welcome sign stopped me right in my tracks. You better believe I ventured through the fence opening to investigate. What I found did not disappoint — a hidden garden party with local food and drink, run by Andreina Teixeira, an Achadas da Cruz resident looking to infuse life back into the abandoned village.

"I saw a good opportunity to give a little bit of life downstairs," said Teixeira. "Downstairs" is what locals refer to as the village of Fajã da Quebrada Nova. Most of the "upstairs" population is older now — there hasn't been a child born in Achadas da Cruz in more than 20 years, leaving the current population to keep this magical place alive.

Having worked in the bar and tourism industry, Teixeira was inspired to start the project out of her family's unoccupied farm home after losing her job during the pandemic. And it just so happens to be breathing life back into the culture tied to this little corner of the world.

"I want to maintain the spirit of this place. I started making food and drink for friends and family, and when I saw tourists coming, I opened it up for parties. The more time I can spend here, why not?"

Why not, indeed. Teixeira's idea has certainly caught on, the old-fashioned way, by word of mouth. She makes typical food from Madeira, with a daily menu usually featuring items like freshly caught fish, reeled in by her husband, and potatoes cooked just like her mother used to make them (think: garlic and lots of oregano). Guests can wash it all down in the quaint garden area with a local Coral beer or homemade poncha. If you're lucky, the house guitar might even make an appearance, live music wafting around the outdoor party. Although there wasn't food or tunes during my visit, I was more than content with my beer and discovery of this secret garden bar and restaurant.

Those wishing to keep the festivities going and spend the night in this remote coastal village can book a room in one of the stone structures hosted by Teixeira. Whether you stop in for a refreshing drink, chat, or full meal, make sure to sign the guest book and leave an extra donation; all proceeds stay within the village, keeping Teixeira's dream and the Fajã culture of Madeira alive.

Once again at the cable car station, I pressed the green button to call my ride back upstairs — back to civilization and cell service, 450 meters above sea level. I had five minutes to revel in the dreamy afternoon I had just experienced before setting foot back into real life.

The Achadas da Cruz cable car runs daily, usually from 8 a.m. to 6 p.m., with an hour or two closure midday for lunch. Hours and parties largely depend on the weather. 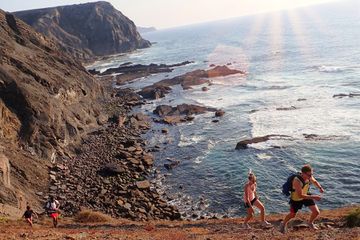