On a foothill of the Sierra Nevada, in southern Spain, a mighty, 700-year-old citadel towers over the city of Granada.

Separate from the city of Granada itself, the famous Alhambra and all that it contains — royal halls and residences, brimming gardens, marble patios, and military barracks — have been a star attraction of the region for centuries.

Designated a UNESCO World Heritage Site in 1984, the Alhambra got its start under the Nasrid dynasty, the last line of Muslim sultans to rule over the Iberian Peninsula. With high ramparts that span a mile in circumference — not to mention 30 watchtowers and four nearly impenetrable gates — it's endured countless sieges, demolitions, and additions over the years.

Even more breathtaking than the resilience of its walls? The depth of its history.

Other, younger Muslim palaces can certainly be found, but none are as old as the Alhambra, which went up between the 13th and 14th centuries. "People from Granada are very proud of the Alhambra and their city," said Maria Valdecascas, who leads group and private tours to the site. "Every guest is brought to the Alhambra."

It took multiple generations of Arab rulers to create the Alhambra

The Nasrid Dynasty, which lasted from 1238 to 1492, marked the last period of Muslim rulers in Spain. Though the Alhambra had its origins as a ninth-century military fortress, it took several different sultans (particularly Muhammad I, Yusuf I, and Muhammad V) to effectively transform the site into the bonafide palace we know today.

One of the best parts of the Alhambra is outside it

Generalife, a separate Nasrid estate, technically sits outside the Alhambra's walls, but it's linked through a series of ornamental gardens with long patios and flowing water channels — ranking it high on horticulturists' lists when they visit Granada. More rural than the Alhambra, Generalife's baroque courtyards overlook multiple vegetable gardens, and there is also a palace, built in the same architectural style as the Alhambra.

Water played a major role in its construction

It's no accident that the Alhambra was built just over three miles from a major river. This was needed to supply water to the bubbling fountains, rectangular pools, and marble baths around which each section of the palace was centered. Flowerbeds and the abundant greenery needed watering, too, so run-off from the fountains was used as irrigation.

A Spanish ruler had a role in the Alhambra, too

In addition to the celebrated Comares Palace, the Palace of the Lions, and the Partal Palace, there's a fourth — and equally spectacular — palace inside the Alhambra. Commissioned by Emperor Carlos V, the first Christian ruler to take over after the Nasrid dynasty, the Renaissance-style Palace of Charles V contains an extensive circular courtyard that's about 100 feet in diameter and framed by a portico with 32 stone columns.

The architecture is the art

Unlike other museum estates in Europe, you won't find framed portraits or objects in glass cases at the Alhambra. Here the "art" is built right into the walls, the ceilings, the window frames, the floors. Throughout each of the palaces, you'll marvel at carved stucco panels inscribed with Arabic poetry. Gaze down and bold squares of colored tile work play out like an old Technicolor movie poster. Meander through the Palace of the Lions' covered patio — where slender, carved columns sprout out of the ground like ivory saplings — and you'll see what we mean.

The Alhambra is permanently under restoration

Conservation and restoration work is always in progress at the Alhambra, meaning you can go back year after year and still find new things to admire. For example, the famous Lions Courtyard — featuring a fountain with 12 separate lion statues that gush water from their mouths — was restored, a process that took eight years.

None of the renovations, however, have impeded the annual International Festival of Music and Dance that takes place at the palace each June. Drawing an international roster of artists, the Palace of Charles V and the open-air theater of Generalife are used as performance venues. 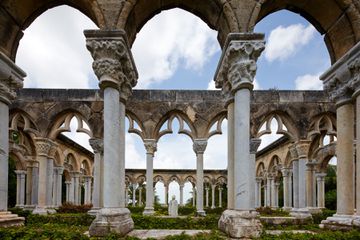 How Did These Medieval Cloisters End Up in the Caribbean? 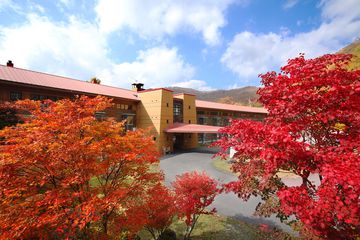